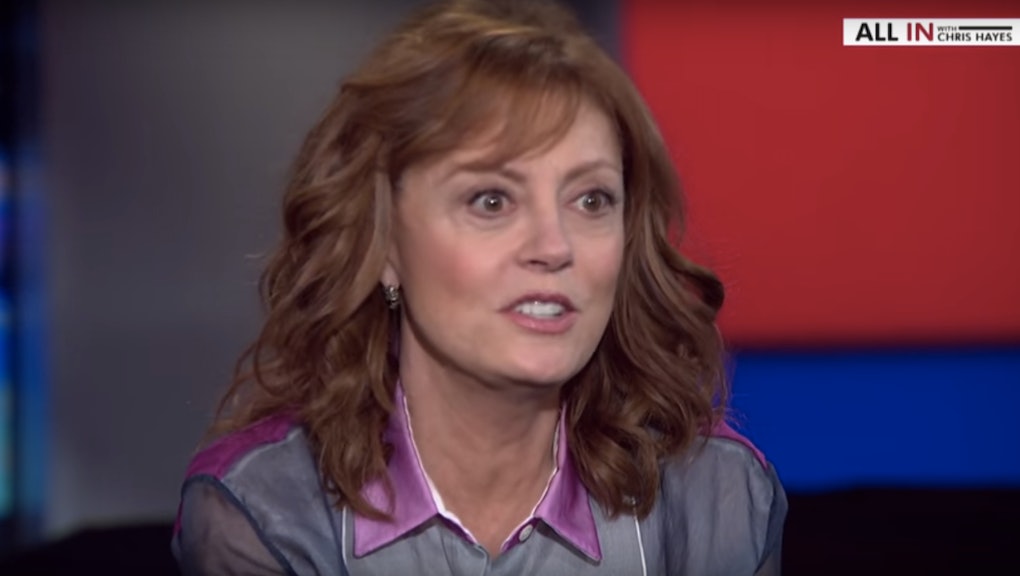 Twitter is not happy with actress Susan Sarandon after her suggestion that Republican presidential candidate Donald Trump may be a better choice for president of the United States than Hillary Clinton.

Sarandon's comments came during an NBC interview on All In With Chris Hayes. During the appearance, Hayes asks Sarandon whether Sanders supporters who have "come to despise Hillary Clinton" will walk away from her and the Democratic Party if she were to be the nominee.

"That's a legitimate concern," Sarandon said. "They're very passionate and very principled." The actress goes on to say that Clinton's ties to big money — Monsanto, pharma, fracking — and her inability to fight for the $15 minimum wage make her a "status quo" candidate and that's dangerous.

Hayes asks Sarandon if she would vote for Trump if it came to a Trump vs. Clinton showdown in the general election. Sarandon acknowledges that, though Sanders would probably urge his supporters to vote for Clinton,  a lot of Sanders supporters "just can't bring [themselves] to do that."

Then, when Hayes asks Sarandon whether she would vote for Clinton, Sarandon said, "I don't know, I'm going to see what happens."

She continued, "Some people feel Donald Trump will bring the revolution immediately. If he gets in, then things will really, you know, explode." When Hayes suggests that line of thinking is dangerous, Sarandon responds:

"If you think that it's pragmatic to shore up the status quo right now, then you're not in touch with the status quo," she said. "The status quo is not working and I think it's dangerous to think that we can continue the way we are with the militarized police force, with privatized prisons, with the death penalty, with a low minimum wage, with threats to women's rights and think that you can't do something huge to turn that around."

Sarandon is not the first person whose judgment and privilege is clouded by Trump, of course. Just ask everyone who's committed to moving to Canada.