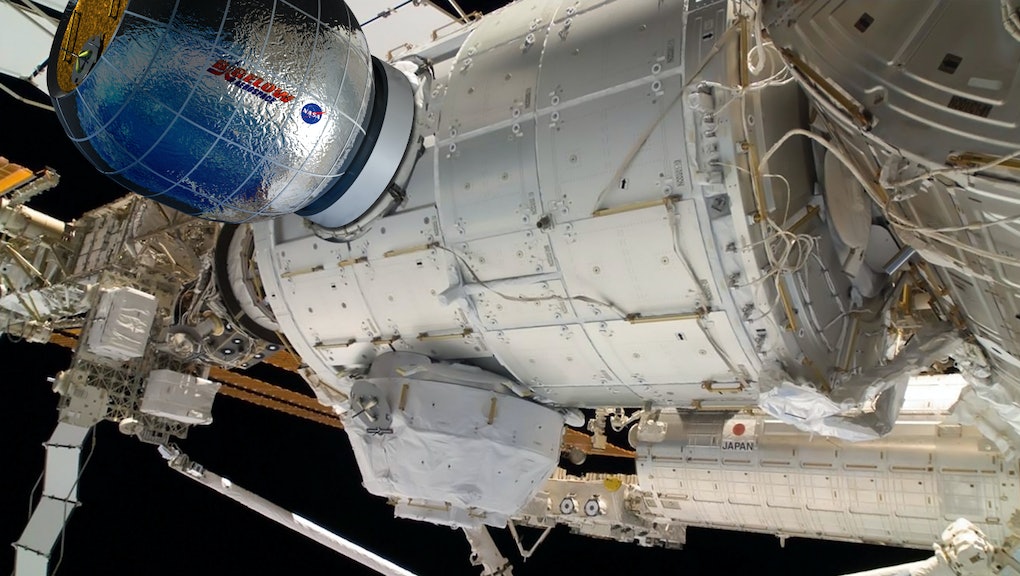 Is an expandable space habitat a reliable way to give astronauts a place to chill? To find out, NASA is going to have to inflate the shit out of this thing.

That'd be the Bigelow Expandable Activity Module, or BEAM — an expandable habitat that will launch to the International Space Station on April 8 as part of the next SpaceX cargo mission.

The objective is to create a habitat for humans in deep space that weighs less and occupies less volume on a rocket during the space mission. Carrying weightless living quarters into space makes a huge difference. Imagine lugging a heavy fold-out couch to your neighbor's house. This would be like carrying an inflatable chair instead.

The effect: It can reduce "the number of launches needed and overall mission costs," according to NASA.

Once the capsule arrives at the space station, a robotic arm will extract BEAM and attach it to the Tranquility Node, where crew members will inflate the structure from its patched dimensions of 5.7 feet by 7.75 feet to 12 feet by 10.5 feet. This will be the first time an expandable habitat is deployed on station, so it will be inflated slowly.

Crew members will install sensors within BEAM once it is inflated and pressurized. These sensors will collect thermal, impact and radiation data for the duration of the inflatable habitat's two-year life.

BEAM will serve as a test platform for the space crew to monitor its design performance: how humans fare inside it amid solar and cosmic radiation, space debris, atomic oxygen, ultraviolet radiation and other murder-y space elements. These tests will help determine whether inflatables will make a comeback in the form of a viable space habitat.

Following its on-orbit life, BEAM will be robotically jettisoned from the International Space Station, burning into beautiful oblivion on its descent through Earth's atmosphere.