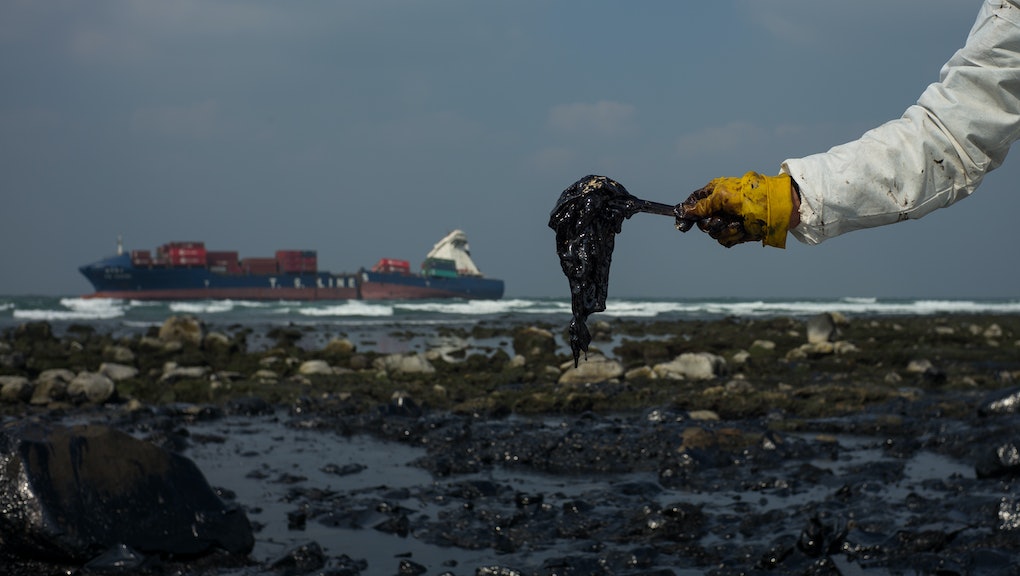 A DJI Phantom 3 Advanced drone caught aerial footage of a cargo ship that broke just 300 meters or a little less than 1,000 feet off the coast of New Taipei City, Taiwan. The ship leaked oil and chemicals into the water and can be seen in a video posted on Sunday on the YouTube channel Freediver HD.

The YouTube channel is run by Dean Fredericks, who emailed the Daily Intelligencer saying he made the video to show people what a wreckage looks as it's actually happening. The video captures the ship broken in half, cargo tilted perilously close to falling overboard and oil seeping into the sea.

During a storm on March 10, a cargo ship called T.S. Taipei caught itself on a reef, and efforts to clean up the impending environmental disaster were held off because of the poor weather, according to a New York Post story published Friday. The ship carried 617 containers and large amounts of chemicals, such as combustible oil and potassium perchlorate (used in fireworks and pyrotechnics), according to the Wild East.

So far, oil from the wreckage has polluted more than a mile-long stretch of the shore, and it could take up to three years for the ecological system to recover, according to the New York Post. Experts believe that mass amounts of fish and animals will die from the lack of oxygen due to the oil.

As of Thursday, about 242 cubic meters of heavy oil remained on the ship, the Wild East reported.

Officials have installed an oil boom to try to prevent the oil from spreading into an adjacent nuclear power plant that uses the water for cooling.