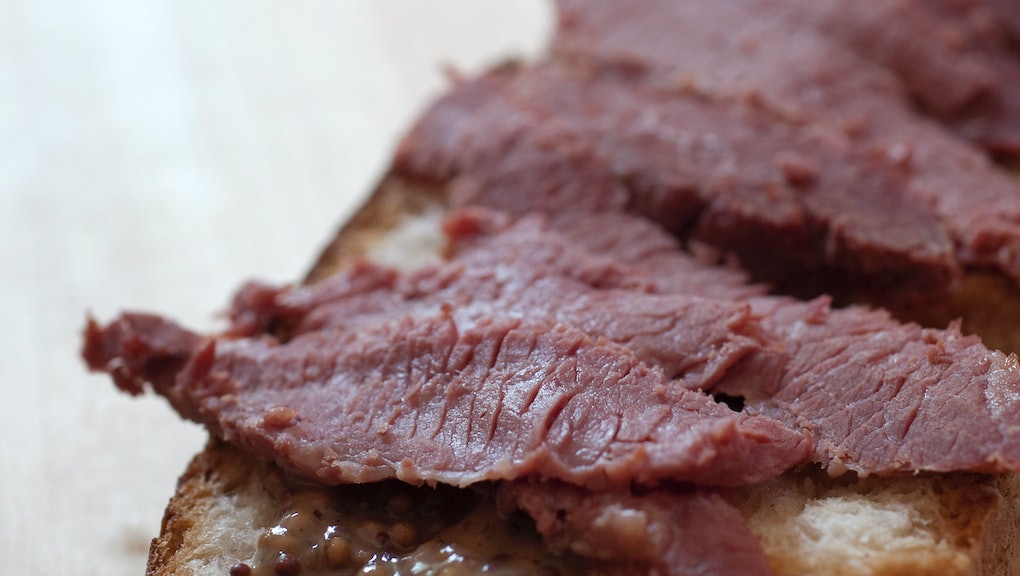 How to Make 'Harry Potter' Corned Beef Sandwiches as Made by Mrs. Weasley

Ron Weasley's mom never remembers that he hates corned beef, he tells Harry Potter in their very first Hogwarts Express ride together. His sad sandwiches are quickly abandoned in favor of a whole cart's worth of candy. But back off, Ron — Molly Weasley has seven children to worry about, each of which is a distracting handful in his or her own right. So corned beef sandwiches it is, then — the least appreciated lunch item in all of Harry Potter.

And discerning Potter palates, rejoice: This is hands down the easiest recipe in the wizarding world. It's a great option for people in a hurry, operating on a budget and/or in need of an on-the-go lunch option (just like Mrs. Weasley). It requires just three ingredients. Mrs. Weasley's corned beef sandwiches are so easy, they may as well be magic. (Yep.)

Prep time: Keep it under 5 minutes, you have six other kids to feed.

—  Two slices of bread, your choice (We recommend rye, but if we're sticking to the Harry Potter script, whatever's around the house is probably what you should be using.)

— Pre-sliced corned beef deli meat, or leftover corned beef, sliced (Mrs. Weasley isn't going to corn a beef for Ron's lunch; she's going to use the remnants of a previous meal, because the Weasleys are strapped for cash and there's no way she has the spare hours it takes to prep that meal just to make sandwiches.)

— Place piece of waxed paper on the counter.

— Place bread slices atop it. They should be untoasted — again, this is a no-frills operation.

—  Hastily apply mustard to one slice of bread. Haphazard application is fine. Stack corned beef on top of that and top with remaining bread slice.

—  Cut sandwich in half and wrap it up in the waxed paper.

And then deposit it in the backpack of your ungrateful offspring, to be tossed aside the second the pumpkin pasties and cauldron cakes roll around.