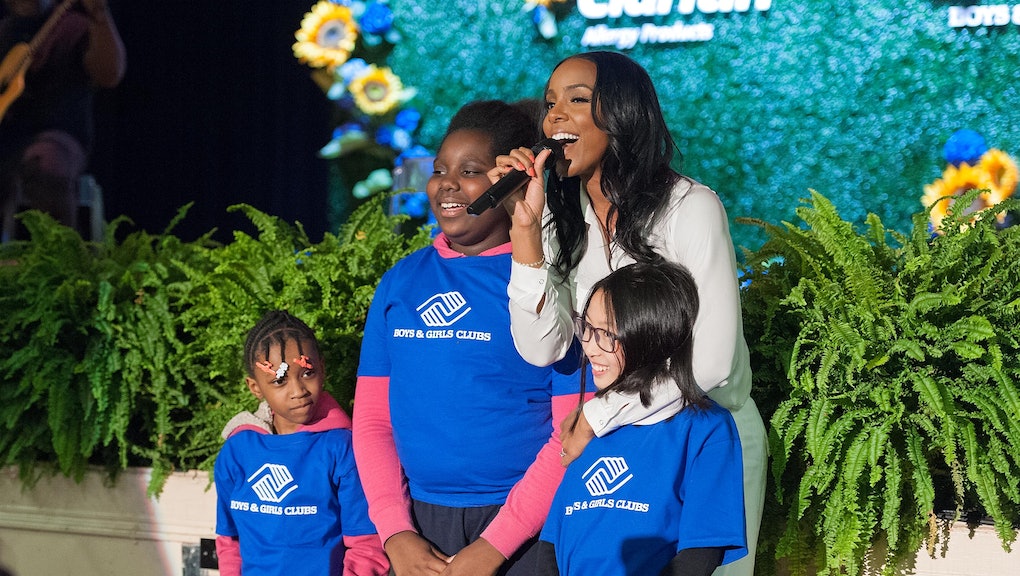 Kelly Rowland Talks Representation: "All Girls Deserve to See Themselves as Beautiful"

Only Rowland's biggest fans likely know the extent of the moves she's been making behind the scenes. For the past few months, the former Destiny's Child member has been working on a new show for BET titled Chasing Destiny, a program built to seek out and mentor the next major girl group. Yet the training she's been offering her girls has gone far beyond music.

"We find ourselves talking about so much with these girls — like stuff that doesn't even much have to do with music, as much as building up themselves," Rowland said during a phone conversation Monday. "It's understanding ourselves as individuals and our stories and struggles and challenges and flaws can be beautiful, because really everyone's going through the same."

This theme of embracing one's struggle has come through in a big way in many of Rowland's recent appearances. It came through during her onstage interview at South by Southwest earlier this month, when she stood up to defend a young girl who recently had her heart broken by a boy who said she would be pretty if she wasn't so dark-skinned.

It hit close to home for Rowland. She's taking her defense to the next level, and recently announced a new line of makeup specifically marketed toward "chocolate girls."

Rowland also works to empower young children and provide safe spaces for them to grow, partnering with Claritin to do makeovers of Boys and Girls Clubs of America in three cities to encourage kids to get active and go outside.

Mic caught up with Rowland shortly after a promotional event in New York City to talk about how she's navigating this new role as a mentor and music mogul.

Mic: Tell me a bit about working with the Boys and Girls Club and what you're doing there?

Kelly Rowland: A couple of years ago in New York City they were having an event for kids there, and I was just really inspired. Between what they do, the speeches that the kids were giving, how well spoken they are, how confident they were, how they had this assurance and belief within themselves. The kids themselves were praising the Boys and Girls Club of America, and I'm just thinking "Okay, I see what's going on here."

This is the second year I've partnered with Claritin, and when I told them about the different makeovers that were needed for some of the clubs, they wanted in on it too. We are doing makeovers in three cities — Atlanta, St. Louis and New York City. It's really exciting.

I know you had a child fairly recently. Has that been a motivation to create more initiatives like this? Has that changed the way you run your career in any way?

KR: Well, I'm still learning how to balance it all. Even before I had my son, I was all about really wanting to be a part for a change when it comes to children: their self-esteem, their innocence, the way they grow up and giving them hope and confidence. We need future leaders. And we need future leaders who are going to believe in themselves, who are headstrong enough to change the world and not to be afraid of change.

That impulse of yours came out so powerfully at SXSW, with that question that the audience member asked about her sister who had her heartbroken by a boy who said her skin was too dark. Your response was breathtaking — was that something you struggled with?

KR: Absolutely. That's why I was so grateful for artists like Whitney Houston and Janet Jackson who had chocolate skin like me. They helped me realize it was actually possible to not think my skin is a barrier.

Whether it's little chocolate girls, or little Asian girls, or little Hispanic girls — you need representation, because all girls deserve to see themselves as beautiful on television, on magazines. We can't afford to give them one type of world. We need them to see how beautiful and unique everyone is.

"I was so grateful for artists like Whitney Houston and Janet Jackson who had chocolate skin like me. They helped me realize it was possible to not think my skin is a barrier."

KR: I think some artists don't want that role model role. But you're really thrust into it. You've got this huge platform. You're given the opportunity to speak, and your words can shape and affect the world in such a way that it makes people think. It makes them think about their own decisions.

One artist I really love right now is Justin Bieber. Everyone's always like, 'Oh my god,' when I talk about his new album. But I think he did such a wonderful job, but more so than anything, he found his purpose. His presence feels different. I really like the idea he wrote this purpose-filled album that's now reaching millions of people.

KR: Absolutely. It's so funny because on the show, myself and Frank [Gatson, award-winning choreographer and creative director], we find ourselves talking about so much with these girls — like stuff that doesn't even have to do with music as much as building up themselves. It's understanding ourselves as individuals and our stories and struggles and challenges and flaws can be beautiful. Because everyone's going through the same. You don't have to feel like you're the only person going through it.

I always find myself telling these girls to write down everything, because there's so many different things they're going through internally. I just want them to be authentic, and I think people appreciate that.

Looking back through your music in preparing for this interview, I stumbled across "Dirty Laundry" again. I still think the rawness of the emotions — about the abuse you faced, your feelings about Beyoncé — are still second to none. Was that a difficult song to record, or did unburdening yourself in that way feel natural?

KR: It took me three days to record the song in full without crying. The first attempt was a mess, because I was so filled with emotion. You never want to approach a song like that shallow, you know? It was more than just hitting the right notes, I wanted to put every single emotion I felt into the words. I wanted it to be completely honest, and because of that it took three days to get out.

One of the lines on "Dirty Laundry" is, "I swear y'all don't know half about this industry." With your new role as a mogul trying to introduce more women to the industry, is that something you're speaking to them about?

Do you think the industry discourages people to take risks?

KR: I think that people in the entertainment world — in the world, period — some people view a "no" as the end of their life. You can look at a "no" like it's a catastrophe and stop right there. But in the entertainment world, you have to keep going. In the world you have to keep going. It's supposed to build you up to make you stronger. You're not supposed to let it keep you down on your ass. You've gotta work to get the "yes." Sometimes you gotta work to get the "no." It's a set-up, not a setback.

Is your new music aiming to capture these same levels of emotion? Is it personal in the way "Dirty Laundry" is?

KR: It's definitely personal. There are so many things that have happened in my life, I could just throw out a record. There's so much emotion in my life — good and bad, coming of age. It's a lot. I'm working on making sure that everyone can understand, relate and have a good time with it too. I'm also not a Debbie Downer. I'm having a hell of a good time now. I still like to go out, make sure I'm still listening to what's hot. I'm constantly being inspired.