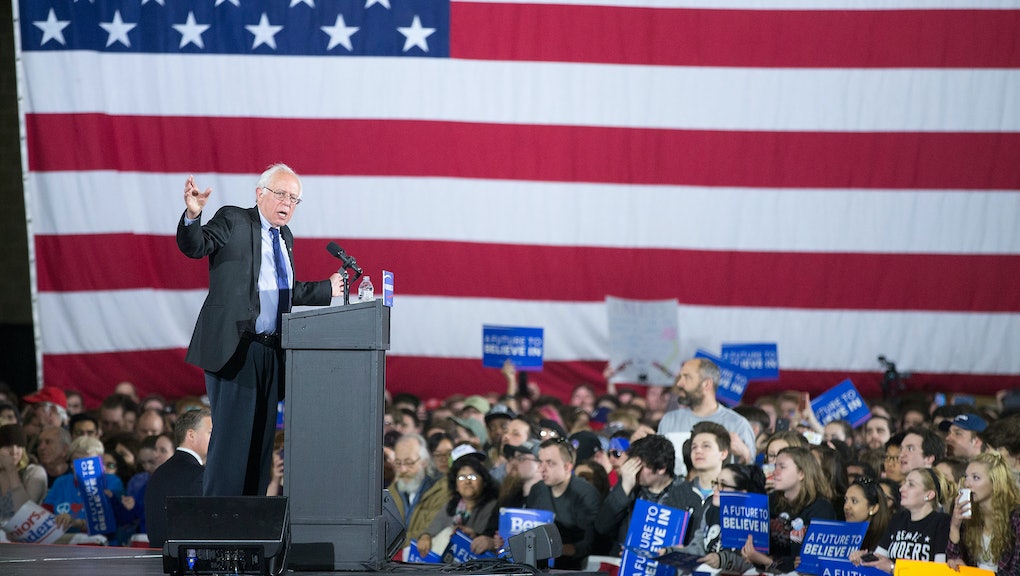 With Vermont Sen. Bernie Sanders making gains on Democratic frontrunner Hillary Clinton in the West, it's not unreasonable to imagine that he might turn the tables and win the party's nomination for president in the 2016 presidential election. And if that were the case, he would need a running mate. If American voters really start feeling the Bern this primary season, whom would Sanders choose as his potential vice president?

Read more: Who Will Hillary Clinton Choose as Her VP? Here's a Short List of Potential Running Mates

Of course, none of the candidates have named a would-be second-in-command at this stage of the game, so these theories are purely speculative. But the internet being what it is — namely, a sprawling rumor mill — predictions for Sanders '16 are already forming. Arguably the most intriguing of those sprouts from the candidate's January appearance on The Nightly Show With Larry Wilmore.

"Elizabeth Warren is a very good friend of mine," Sanders reportedly told Wilmore, "I have known her for a long time, before she was in the Senate. She is a great U.S. Senator. She has stood up to Wall Street. She has stood up to the Big Money interests. So, she and I will work together."

This was in response to Wilmore's question on whether or not Sanders had put any thought into a potential running mate. And while anyone who's ever istened to Sanders speak knows that standing up to Wall Street and Big Money interests are two of his favorite pastimes, Warren's track on that score isn't her only asset to the Sanders campaign (though she has taken Clinton to task for having cooperated with big banks), though.

She's a woman, for one, which could feasibly attract some of the female voters who are firmly pro-Clinton to Sanders' largely white male voter base. According to the Fiscal Times, her status as an economic populist jells well with the Vermont senator's platform, although her lack of foreign policy experience only reinforces what's arguably his greatest shortcoming. Warren, for her part, has refrained from declaring support for Clinton, recently noting that she's "still cheering Bernie on."

Another buzzed-about Democratic VP pick is U.S. Labor Secretary Tom Perez, Politico reports. His name is usually mentioned in conjunction with the Clinton campaign, but Perez — despite being relatively unknown — could bolster a Sanders ticket as well. Currently, Clinton is beating Sanders among African-American and Latino voters. But Perez, who is of Dominican descent and has worked to further civil rights and fought against abuse of police power, could help bridge that gap.

He also appeals to Sanders' progressive leanings. According to Politico, he "has more credibility with committed progressives — who measure politicians by their battle scars — than almost anyone else around." What he doesn't have, however, is foreign policy experience, which Sanders would do well to add to his ticket.

Hawaiian Rep. Tulsi Gabbard is another possibility. Having endorsed Sanders in late February, she values what she called his "sound judgment" when it comes to military intervention abroad. Gabbard is a "veteran of two Middle East deployments," as she put it in her endorsement, and the first female vet to become a U.S. Congresswoman.

When she endorsed Sanders, Gabbard had to abdicate her position as vice chair of the Democratic National Committee to do so, Inquisitr reported. A Sanders presidency, then, means a lot to her. And while she's relatively inexperienced, she does serve on both the House Foreign Affairs Committee and the House Armed Services Committee, which helps a bit to fill in Sanders' foreign policy deficit.

At 34, she's also young — which could balance out a Sanders ticket nicely. But at the end of the day, her age could also be the biggest deterrent, because it means she hasn't been in the politics game very long. No matter how enthusiastic a supporter of the Sanders campaign she is, she may be too new to Washington to win his hypothetical VP nomination.