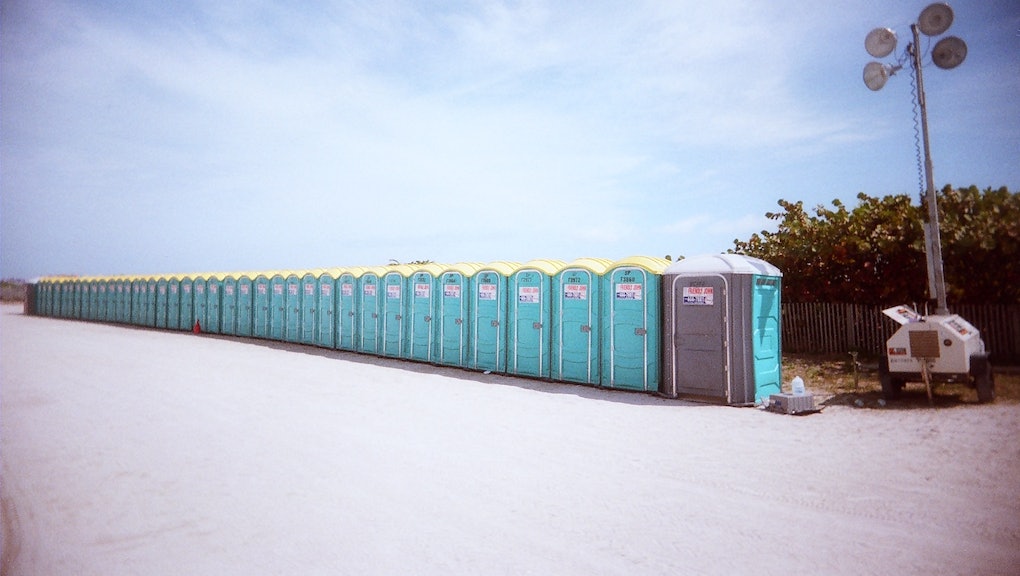 4 Really Nasty Illnesses You Can Catch From a Porta-Potty

Summertime is around the corner, which means the season for outdoor concerts, food markets and festivals is also imminent. The quixotic and carefree activity of hanging outside with your friends and openly imbibing under the blazing sun usually comes to a sobering halt once one of you needs to use the bathroom.

Long lines aside, you normally avoid the porta-potty because they are unsanitary, they smell awful and they are quite literally filled with shit. But there are other things lurking in a porta-potty that might make you rethink your drinking pace and eating habits at these outdoor events — or vomit for a reason other than overindulgence.

Read more: One Image Shows Just How Gross Bathroom Hand Dryers Can Be

Salmonella is a bacterial disease that affects the intestines, causing a range of symptoms from nausea to fever to bloody stool. According to Mayo Clinic, salmonella is usually spread when one consumes food contaminated with feces. In other words, the person handling your food and drinks can spread salmonella simply because they — not you — used the porta-potty and didn't sufficiently wash their hands afterward.

Norovirus is highly contagious, and the infection can cause diarrhea and vomiting. Norovirus is similar to salmonella in that it spreads when one consumes food contaminated with fecal matter. You can contract norovirus through the relatively benign act of touching your mouth after making contact with a contaminated surface or object. Furthermore, you can contract norovirus from "being in close contact" with anyone who has the infection, according to Mayo Clinic.

According to Mayo Clinic, shigella infection, or shigellosis, occurs when you consume food or water contaminated with a group of bacteria called "shigella" or come into direct contact with it through fecal matter. Symptoms of shigellosis include diarrhea (usually bloody) as well as abdominal pain and fever.

An emphatic WTF, but yes: You can even get hepatitis A from a porta-potty. According to Mayo Clinic, hepatitis A is a highly contagious virus that causes inflammation in the liver and hinders the organ's ability to function. Symptoms include nausea and vomiting, fatigue, abdominal pain, "clay-colored bowel movements," as well as dark-colored urine, Mayo Clinic reported. Contraction of hepatitis A occurs when one consumes contaminated fecal matter in food or water (even a "tiny amount," according to Mayo Clinic); eating shellfish raw that's from sewage-polluted water; or "being in close contact" with someone infected, even if they don't exhibit any symptoms.

However uneasy you may feel using porta-potties, experts say you shouldn't worry too much: A healthy immune system and proper hygiene will safeguard you from most infections you could possibly catch in a public loo.