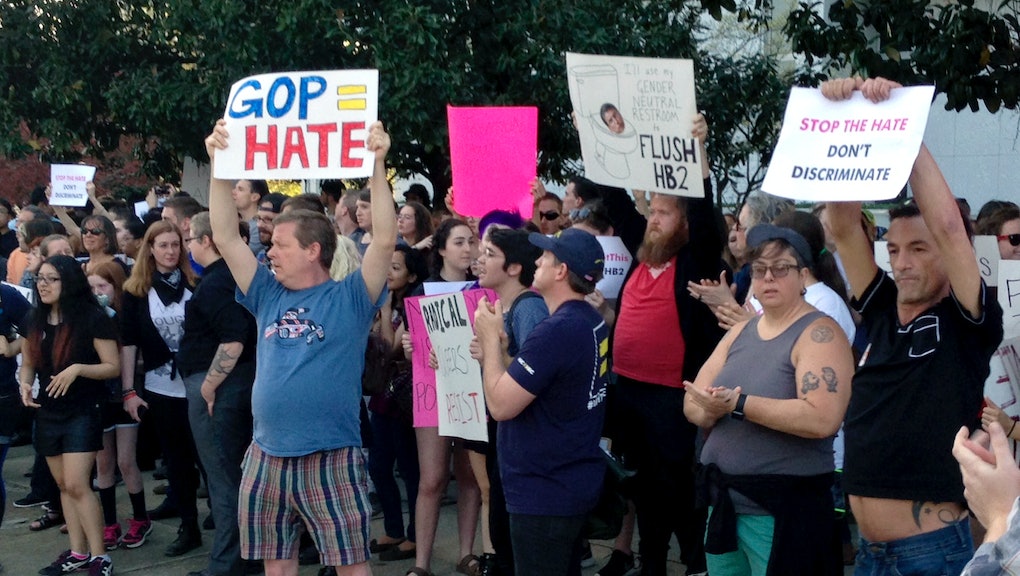 On March 23, North Carolina passed House Bill 2, a state law that prohibits transgender people from using bathrooms designated for their gender if it's not their biological sex. Many in the media are referring to it as the "anti-LGBT" bill.

Protestors and activists have come together in the streets of North Carolina and outside Republican Gov. Pat McCrory's mansion to demand justice for the LGBT community and reverse the legislation.

McCrory dismissed the protests as "political theater" and a "calculated smear campaign."

But the North Carolina chapter of the American Civil Liberties Union sued North Carolina state officials Monday, and the state's Attorney General Roy Cooper refused to defend them because he said the bill is "unconstitutional" and a "national embarrassment."

"Stop the hate, don't discriminate," some people's signs read, as many gathered to protest outside the North Carolina Executive Mansion, where McCrory lives, on March 24, the day after House Bill 2 was passed.

According to him, the state ordinance allowing transgender people to use bathrooms reflecting their actual gender "defied common sense."

And on Tuesday, NC Attorney General Roy Cooper said he won't defend them.

Because he knows the law is unconstitutional.

Yes, 2015 was huge year for same-sex couples, with DOMA being ruled unconstitutional.

But in 2016, there's much more more worth fighting for.