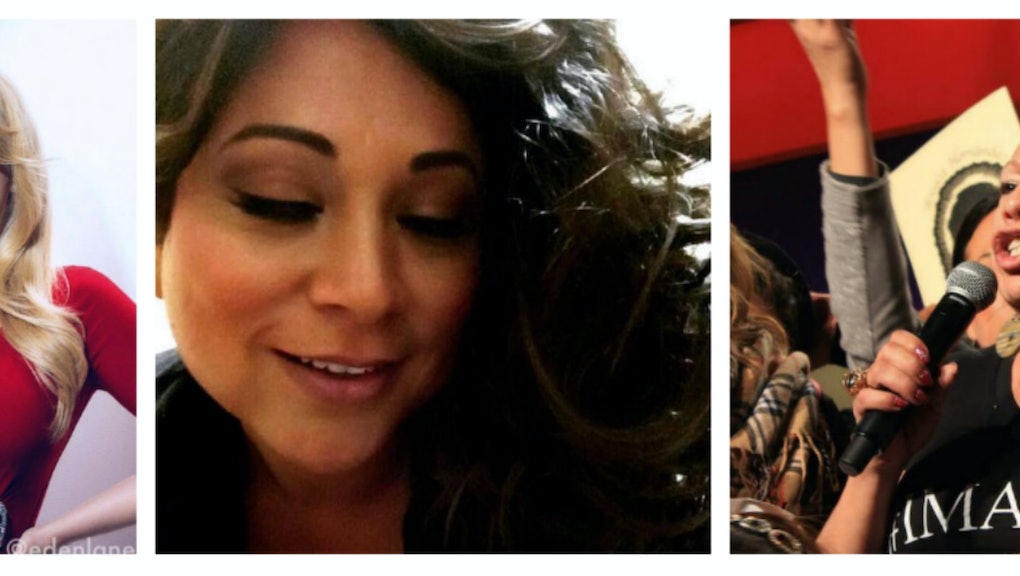 7 Transgender Women You Should Know Besides Caitlyn Jenner

Currently, very few media narratives celebrate the rich diversity of the transgender community, especially transgender women: The stories are often about the latest victim of trans violence or the hyper-privileged Caitlyn Jenner — and her many gaffes. But there are many other transgender women whose names you should know. Here are just a few.

As a Mexican transgender woman and a member of the immigrant community, Bamby Salcedo has been a leader in several activist movements, including immigration, HIV, LGBTQ issues, prison reform and the Latino community.

She formed Angels of Change, a transgender youth empowerment program; the TransLatina Coalition, through which she helped compile the report "TransVisible: Transgender Latina Immigrants in U.S. Society" and began TransLivesMatter National Day of Action. She's also the star and subject of the film Transvisible. Salcedo has garnered numerous recognitions and awards for her accomplishments — the Advocate named her one of 13 LGBT Latinos changing the world and Colorlines named her among one of 14 women of color who rocked in 2014.

If you watch I Am Cait, Jenner's E! reality show, then you know the actual star is Jenner's friend and transgender author Jennifer Finney Boylan. Boylan, who has authored 13 books, has her hand in multiple pots. Aside from appearing in and consulting for I Am Cait, she is also a consultant on Amazon's Transparent.

Boylan is also a contributing opinion writer for the New York Times. She is a professor at Barnard College and serves as the national co-chair of the board of directors for GLAAD.

If you don't know her name, you may have at least heard her voice. Jennicet Gutiérrez is the transgender Latina who caused a media stir when she yelled out to President Barack Obama during the White House's LGBT Pride Month reception in 2015.

An undocumented transgender woman, Gutiérrez is an organizer with Famlilia: Trans Queer Liberation Movement. Since her infamous shout to the president, she's been a leading voice in both the trans and undocumented movements and the subject of a profile in BuzzFeed.

Roberts is an award-winning activist and the founding editor at TransGriot, a blog dedicated to a view of the world through the eyes of a transgender black woman. Roberts' writing has also been featured in the Advocate, the Bilerico Project and Ebony.

Roberts works to empower people of color in the trans community to use their voices and to shed light on the struggles of all LGBTQ people in the African Diaspora. Aside from her journalism, she's also lobbied for change at both the state and local levels in Kentucky and Texas. She was part of the movement that passed the Houston Equal Rights Ordinance, which was then famously struck down by voters in November after a smear campaign reduced it to a few unfounded myths about transgender women in bathrooms.

Jen Richards is the co-writer and co-producer of Her Story, a trans-themed YouTube series. She was also a series regular on I Am Cait. Richards founded the Trans 100, an annual list of the trans community's trendsetters. Richards created We Happy Trans, a website dedicated to telling positive transgender stories. In fact, Richards is quite the creator: She started the WTF Trans Dating and Trans Love Stories Tumblrs as well as monthly online Twitter #transchat and the Chicago-based group No Boys Allowed.

Aside from writing and highlighting transgender voices, she was also the managing director of Grammy Award-winning contemporary classical ensemble eighth blackbird and president of New Music Chicago.

Here's an episode of Her Story, where Richards plays a trans woman in a budding friendship with a lesbian.

Her Story has another electrifying actress: Angelica Ross.

Ross is the executive director and CEO of TransTech Social Enterprises, a design firm and training academy that empowers, educates and employs members of the trans community and promotes entrepreneurship.

She acts, sings, writes and works to make sure trans people have better economic prospects: What's not to love?

Though she is known for covering politics, she has lately shifted to covering Colorado's vibrant arts and theater scene. She even got to host her own show, In Focus with Eden Lane. Regarding the opportunity, she told People in 2015:

"I'm so grateful to my station for taking a chance with me," she said. "I wanted to be a journalist, not the 'first trans journalist.' I didn't have an agenda. I wanted to — and still want to — do good work. I never hid who I was, but I didn't lead with it, either. I am just another journalist who wants to be good at what I do."

These are just seven names you should know going forward, but there are many more. Current estimates show that there are as many as 700,000 people who identify as transgender in the United States, and they're each talented in their own ways.