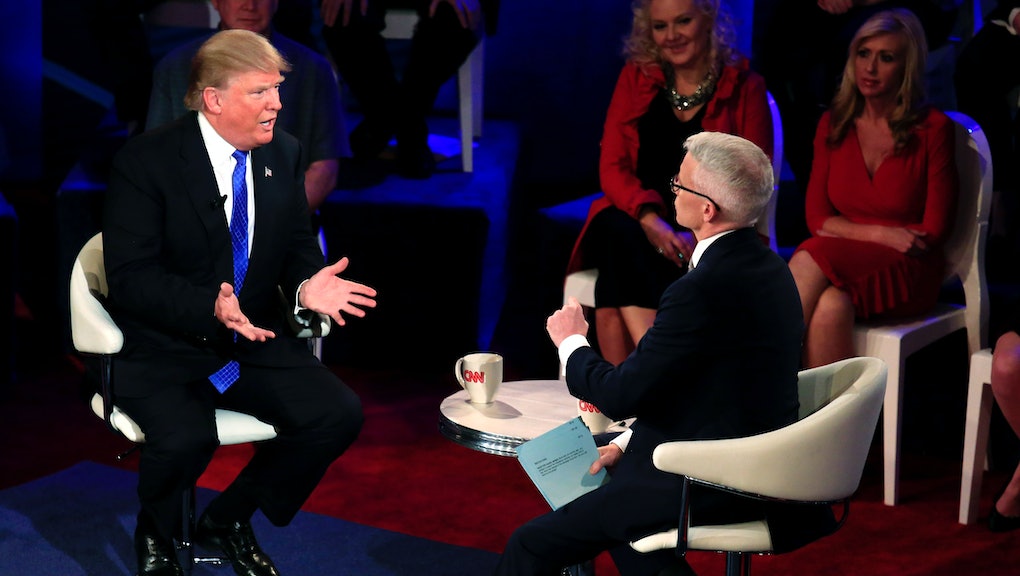 At the Republican Town Hall debate on Tuesday, the GOP frontrunner managed to completely dodge the following question from Lt. Brian James Murphy, who was the first police officer to respond to the 2012 Sikh temple massacre in Oak Creek, Wisconsin.

"In light of the Brussels and Paris attacks, one of the quickest knee-jerk reactions is to backlash against specific religious minority groups," began Murphy, who was shot 15 times by Wade Michael Page, a white supremacist gunman who murdered six Sikh Americans at a Gurdwara outside Milwaukee four years ago.

"Ninety-nine percent of the men in the United States who wear turbans are Sikh and not Muslim," Murphy continued. "How would you suggest we help educate the public and not alienate these groups, and at the same time, how do we protect the Constitutional rights of minority groups like the Muslim, Sikh, Hindu and Jews, while still addressing radical Islamization?"

In the five months since terrorists killed 130 people in Paris, France, a rash of hate crimes against Muslims and Sikhs — who are often mistaken for Muslims — has stormed America. It has landed multiple victims in the hospital, wracked communities with fear and left houses of worship vandalized from California to Pennsylvania.

Meanwhile, GOP presidential candidates have doubled down on Islamophobic and xenophobic rhetoric. Ted Cruz has suggested a religious test to determine whether Syrian refugees entering the U.S. are Muslim or not, and more recently called on Americans to "empower law enforcement to patrol and secure Muslim neighborhoods."

Protecting people's civil rights has not been a priority for Trump, either. He has famously called for a temporary ban on Muslims entering the United States, endorsed the idea that Muslim Americans should submit their names to a registry for monitoring and even suggested the best way to stop terrorism was to "take out [terrorists'] families."

One topic he has plenty to say about, however, is "Radical Islamic terrorism." Here's a transcript of the first 90 seconds of Trump's meandering response to Murphy, for readers with long attention spans and even stronger stomachs:

We have a tremendous problem with radical Islam, whether we like it or we don't. We have a president who won't talk about it. I mean, Ted was saying the same thing, we have a president who won't talk about it. Why he won't talk about it, perhaps only he knows, but it's a disgrace what's going on. We have a serious, serious problem, and when I called for a temporary ban, I thought that was a very bad thing for me to do politically, but I felt I should do it. And, I didn't know that I would go up in the polls opposed to down. I did that because I really felt there had to be something done. That was after the horrible San Bernardino, California situation. After, obviously, Paris, which was terrible. You know, we talk about Paris with the gun-free zones, we talk about Paris with their strong gun laws. By the way, nobody had guns except for the bad guys. If we would have had guns on the other side going, in terms of Second Amendment having to do, if bullets were — same thing with San Bernardino — if bullets were going in the opposite direction, you wouldn't have had the problems in those two places, that I can tell you. So I think we have to be extremely careful with our Second Amendment, and we have to cherish our Second Amendment. Very important. But I would say this: When I called for the temporary banning, we have to look at it. We have a serious problem. I think you'll admit that Brian. We have a very, very serious problem with radical Islam, and if we don't want to discuss it, and if we don't want to look at it, we're never going to solve the problem ...

Are your eyes bleeding yet? Trump went on like that for another minute, touching on how "violently" we have to deal with ISIS to defeat them, and how he has always been "against the war in Iraq." CNN moderator Anderson Cooper finally had to interrupt him and repeat Murphy's question about civil rights and religious minority groups to get him back on track:

Could it be that we were on the verge of an actual answer?