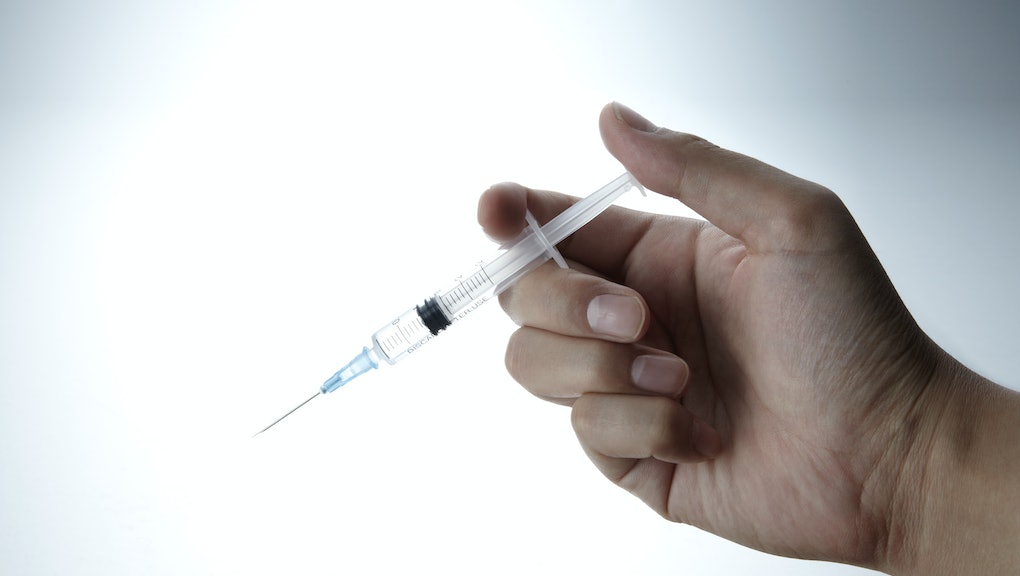 Approximately 67% of women use some form of non-permanent birth control for a reason: The pill, patch, ring, hormonal implants or several other options are all pretty excellent at preventing pregnancy. It makes sense, then, that nearly half of men in the United States would love to have a long-acting reversible contraceptive, or LARC, they can take themselves. Unfortunately, they still don't have any options — but that could be changing soon (well, soonish).

According to a report released on Wednesday, pharmaceutical developers at the Parsemus Foundation could be one step closer to putting Vasalgel, a male contraceptive option currently in development, on the market. However, while researchers are making headway gauging the product's effectiveness, getting Vasalgel into the hands (or, uh, more sensitive parts) of real live human beings still might take a while.

In a pre-clinical study of a dozen rabbits, the gel — a high-weight polymer that is injected into the vas deferens — was effective at preventing sperm from exiting the vas deferens in 11 of the subjects. Nearly a month after the injection, the rabbits were azoospermic, meaning their semen contained virtually no sperm for one year. The next step is a six-month-long human trial that should begin at the end of the year, according to Ben Carlson, director of communications for Parsemus Foundation.

"The study will be small, and restricted to men who are planning a vasectomy anyway, since reversibility of the contraceptive will not have been proven in humans yet," Carlson said in an email to Mic. "If all goes well, we'll initiate a larger, multi-site clinical trial, likely in 2017. Approval for human use may be granted as early as 2018."

Whether "all goes well" will depend not only on how effectively Vasalgel blocks the release of sperm, but also how long the contraceptive effect lasts. As Parsemus Foundation executive director Elaine Lissner told Cosmopolitan, while the gel seems durable enough to last more than a year, "we just don't know" how long it will actually work.

The duration of effectiveness is a crucial consideration if people are not only going to be getting neutering shots in their privates, but then going off and having sex with the expectation of not getting someone pregnant. But determining how long the injection lasts isn't the only obstacle to getting Vasalgel on the market: Even setting up a clinical trial is incredibly involved, not to mention costly.

"The process of bringing a contraceptive to market is probably more complicated than most people realize," Carlson said. "[Government] regulators require copious documentation about the product and the clinical trial prior to giving permission to conduct the trial. This all takes months to years to accomplish, and significant funds. The conduct of a clinical trial is even more expensive, quickly moving the project from tens of thousands to millions of dollars needed."

"We believe it will be something that men across the world will be able to afford."

So yeah, cost is an enormous issue. And, at the moment, there's also no guarantee it won't be passed on to people who want to use products like Vasalgel. Unlike female contraceptive options currently available, male contraceptive options (including condoms, which are relatively accessible, and vasectomies, which can cost up to $2,000) are not covered by the Affordable Care Act.

Organizations like the Male Contraception Initiative have already started petitioning for ACA coverage of existing male contraception, but it's unclear if or when that will happen — or what that will mean for Vasalgel and future similar products. According to Carlson, ensuring the product is truly accessible is a key part of the developers' mission.

"While the organization must make enough money to stay afloat, profit is not the only motivation," Carlson said. "We can't yet estimate the market price for Vasalgel, but given our social mission, we believe it will be something that men across the world will be able to afford."

That mission doesn't really align with the interests of the pharmaceutical industry, though, which is what the Parsemus Foundation and other advocates of male contraceptive development maintain is holding up the whole process. As Aaron Hamlin, executive director of the Male Contraception Initiative, said previously in an interview with Mic, "the resources just aren't there" for researchers developing birth control methods for men, primarily because there's no impetus to provide them.

"Any new product pharma companies could introduce would be likely to cannibalize their existing products," Pricenomics reported in October. "After all, one reason for a man to want to use a reversible contraceptive is so his partner can stop taking the pill."

Another reason could be so that men take it upon themselves to prevent pregnancy instead of placing the onus on their partners, but unfortunately for everyone that's not what brings in the most money. Pregnancy prevention has long been considered women's responsibility, and throwing money at female contraception keeps the burden where it's always been. The fact that men might want more responsibility and more options doesn't change the bottom line.

So while clinical trials with rabbits may look promising, the next step isn't necessarily proving a male birth control method works for humans. It's being able to pay for it.