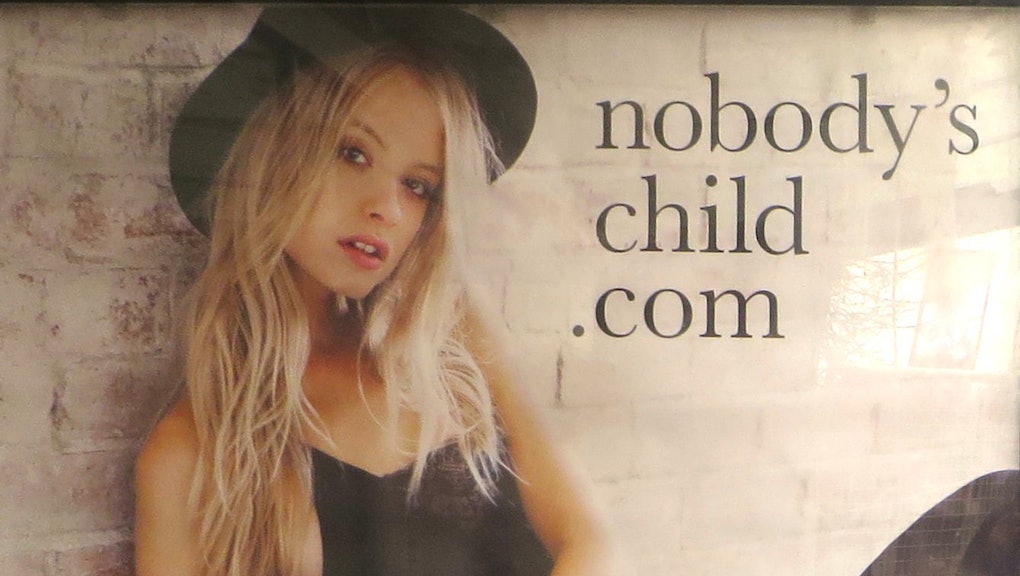 This Clothing Ad Was Banned for Sexualizing "Vulnerable" Children

On Wednesday, the ASA was at it again, this time banning two poster advertisements by the British brand Nobody's Child for sexualizing children. Or, as the ASA ruling stated, sexualizing a "vulnerable" child.

Here are the two ads in question:

According to the ASA, the left ad is suggestive because her leg is propped up just so, and one of her breasts is slightly exposed. On the right, with the model sitting in a chair, looking directly toward the camera with her one leg slightly raised, the ASA concluded that it showed "suggested vulnerability." The ASA received three complaints stating that the model appeared to be a child. The brand's name, which is bolded on each ad, probably didn't help either.

But here's the thing: The model isn't underage. She's 21. To the ASA, however, that doesn't really matter.

"We understood the model featured in the ads was 21 years of age but considered she appeared younger, and that when shown in conjunction with the prominent brand name 'nobodyschild.com', would be regarded as appearing to be a child," the ASA noted. "In that context, we considered that the model's poses implied vulnerability and sexual precocity."

According to the ASA, in sexualizing women who appear younger than 18, ads can appear to give the green light for others to sexualize young women who may be below the age of consent.

This isn't the first time the ASA has come after clothing companies. American Apparel has long been a target; just last year, the ASA called out one of its product images for appearing to sexualize a child on its website. Though the model was actually 20 years old, the ASA claimed she looked under 16 years old. In 2014, two American Apparel ads featuring a woman bending over in a plaid schoolgirl miniskirt were banned for similar reasons. And in both 2009 and 2012, American Apparel came under fire for putting models who looked younger than 16 in provocative poses.

There are also instances, of course, of actual underage models causing similar controversies.

In 2011, a 10-year-old model sparked outrage when she appeared in an ad wearing sky-high heels and a slinky dress, which her mother swiftly defended. Three years later, when she was still just 13, people took issue with her gracing a magazine cover. In 2011, Urban Outfitters was sued for using images of a 15-year-old holding a beer and riding a motorcycle on their T-shirts. Advertisements for Marc Jacobs perfume featuring a then 17-year-old Dakota Fanning were banned by the ASA for sexualizing a child as well.

If all of the above seems a bit trivial, it's actually just another aspect of our culture's tendency to sexualize women, old and (especially) young, in ways that can be harmful. From food to cell phones to clothing — really, almost always with clothing — advertisers are obsessed with making anything look like a sexual innuendo... without thinking about the message that sort of image may be sending.