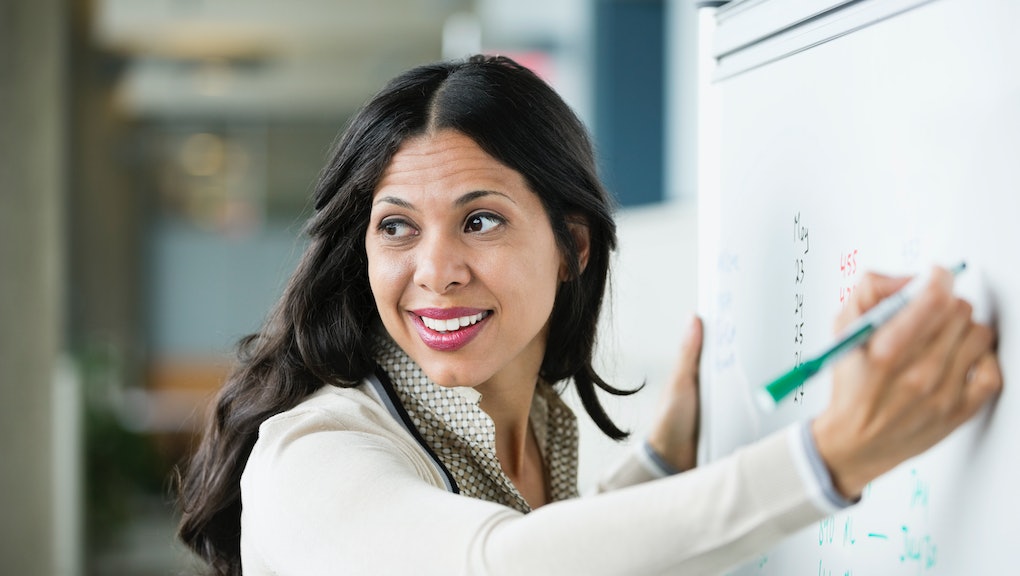 Why the Workplace Gender Gap Is Worse for Women of Color

Though the last couple of years have wrought a number of flashy initiatives aimed at increasing gender and racial equality at certain companies, men continue to own the lion's share of leadership roles in the U.S. And while women at large are languishing in general staff roles, women of color are suffering in particular.

Black, Hispanic and Asian women hold just 3% of board director roles at Fortune 500 companies, according to "Barriers and Bias: the Status of Women in Leadership," a new study from the American Association of University Women. That's in part because few women of color can even snag a job at Fortune 500 company, where they make up 17% of the workforce. Once in, a minuscule 4% are able to rise up to managerial or executive posts.

"Many thousands of books and articles offer theories about the nature of the problem and advice to individual women on how to stand up, step up, lean in and make their voices heard," reports the study. "But the leadership gender gap is significant, persistent and systemic. Individual choices alone simply will not solve the problem."

The project looks at several available studies along with its own analysis to answer questions about why the gender leadership gap exists, what initiatives are effectively curbing it and what steps should be taken to lower the barrier to entry for women.

"The leadership gender gap is significant, persistent and systemic. Individual choices alone simply will not solve the problem," the study reports.

Whatever the reason for these discrepancies, it's not for lack of qualifications. Evidence shows that more women in the U.S. obtain bachelor's, master's and doctoral degrees than men. However, while more women of color are likely to hold a degree over men of color, according to the Census Bureau, women of color still only make up 23% of all college students. That's a significantly greater percentage than the number of women of color in leadership roles.

The Case for Women in Leadership

A mere 4% of CEOs on Standard & Poor's 500 Index are women, and women also make up less than a third of Congress.

There are still other rewards: Companies with gender diversity at the leadership level are less vulnerable to issues of groupthink; ladies tend to lay off workers less. Retaining workers is actually cost-saving, preventing companies from spending more on hiring and training expenses. Fewer layoffs are good for morale. Finally, having women in boardrooms can also usher in broader diversity initiatives and greater acceptance of lesbian, gay, bisexual, transgender and queer employees.

While more women at the top isn't a cure for all our economic woes, these studies and statistics stand as a reminder that women are just as capable as their male counterparts to run a business.

Ideas about what makes a leader may be what continues to keep women down, the study suggests. At a young age, men are often taught to be "confident, assertive and self-promoting," while women are discouraged from those traits — the very characteristics we often value in leadership. In contrast, the study says women tend to undersell their achievements. It's not just this study that says so; the "confidence gap" has been a public discussion for years, with no solution in sight.

Where conditioning ends, stereotyping begins. As adults, women are often thought of as caregivers and as a result are asked to provide a nurturing role in the workplace, even when it's inappropriate. If a woman becomes a mother, it "triggers powerful negative competence and commitment assumptions" according to a study referenced within Barriers and Bias. Accordingly, after giving birth women see a 4% decrease in earnings per child. Meanwhile men actually thrive in fatherhood, with an average 6% earnings increase.

Where conditioning ends, stereotyping begins. As adults, women are often thought of as caregivers and as a result are asked to provide a nurturing role in the workplace, even when it's inappropriate.

But white women and women of color are not equally disadvantaged by stereotypes. The study provides evidence that black women aren't punished for dominant behavior in the workplace, while Latinas are frequently labeled "emotional" or "angry." When polled about their behavior, Latinas said they weren't angry; rather, they didn't show deference.

These stereotypes and social structures have a major impact, the study says. People who feel they're being negatively stereotyped can see their performance suffer as a result, further feeding potential stereotypes. They can also experience stress and anxiety, which can negatively impact their workplace demeanor.

Then there is the pesky issue of unconscious bias, those immediate judgments that can taint our perceptions of an individual. "For example, despite finding no evidence of explicit preference for male or female managers, researchers found that male participants implicitly associated positive managerial characteristics (i.e., competent, executive, productive) with men," the study reports. These hard-to-detect preferences built on a bedrock of stereotypes and social conditions can impact overall workplace decisions, promotions and employee pay.

Some people complain that affirmative action and similar policies that put an emphasis on getting more women and minorities into companies or leadership roles are flawed, because the people who receive these roles under these circumstances are somehow less deserving of the role, or that this nation's system of meritocracy is somehow threatened. Unfortunately, pure meritocracy doesn't exist. People get positions because of nepotism, bias, social status and their personal accomplishments. To think otherwise is naive.

Injecting more women, specifically more women of color, into visible leadership roles doesn't mean promoting the undeserving. It means taking a hard look at the women under your employ and attempting to objectively rate their ability to command a team.

That may mean redefining how we perceive leadership. Bias and Barriers found in a meta-analysis of 69 studies that characteristics associated with leadership are definitively masculine. To change how we understand what makes a leader, the study calls for a variety of programs, including better maternity-leave provisions, at-work bias training and wage transparency.

Sadly, though comprehensive, the study isn't likely to make much of a dent. Even companies that have invested in unconscious bias training and more supportive maternity programs still haven't seen a jump in female leadership.