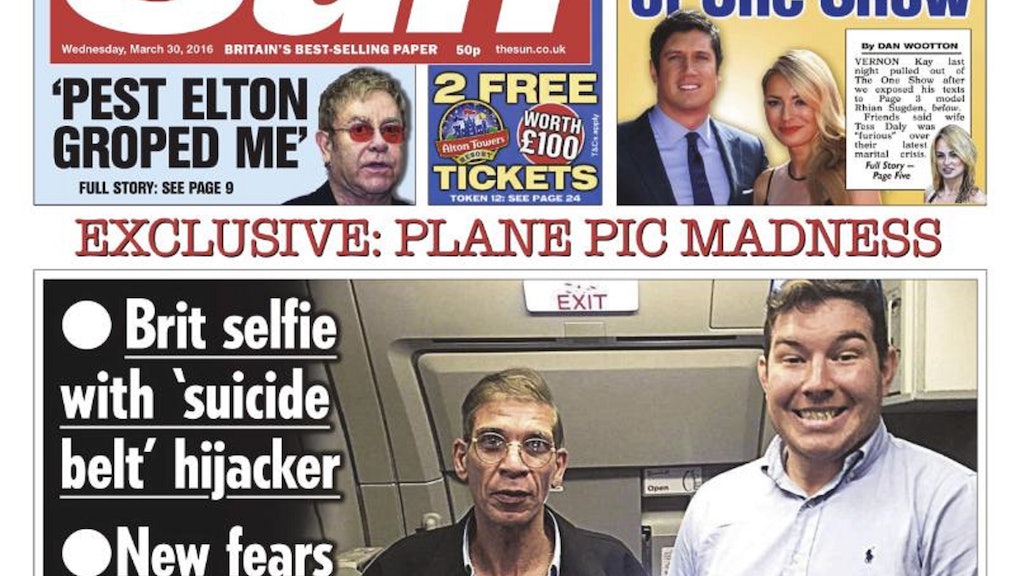 On Tuesday morning, Seif Eldin Mustafa hijacked an EgyptAir flight that was flying from Cairo to Alexandria, forcing a premature landing on the Mediterranean island of Cyprus. But while the strange details of the incident — from the Egyptian hijacker's fake suicide belt to his demand to speak to his ex-wife — have gotten plenty of attention, the strangest thing to emerge from the hijacking is a bizarrely cheerful snapshot.

Ben Innes, a British safety inspector and one of the last hostages to leave the plane, for some strange reason, took the opportunity to pose with the hijacker.

"I'm not sure why I did it, I just threw caution to the wind while trying to stay cheerful in the face of adversity," the 26-year-old British safety inspector told the Sun. "We were sitting around waiting. I thought, 'Why not? If he blows us all up it won't matter anyway.'"

"He just shrugged OK — so I stood beside him and smiled for the camera while a stewardess did the snap," Innes added. "It has to be the best selfie ever."

Security expert Will Geddes told the Sun "I suppose it's a sign of the times, it's the Facebook selfie generation — but this was highly irresponsible." Others apparently thought it was awesome.

But take away the severity of the threat, the panicked families, the foolishness of the moment and all the other things that come along with a terror threat and there still remains one major, inexcusable problem that still has the world up in arms.

The selfie is, in fact, not a selfie at all.

To qualify, Innes would have had to snap the shutter himself. He did not. Even his mom says so.

And in this day and age, no error could be more egregious.