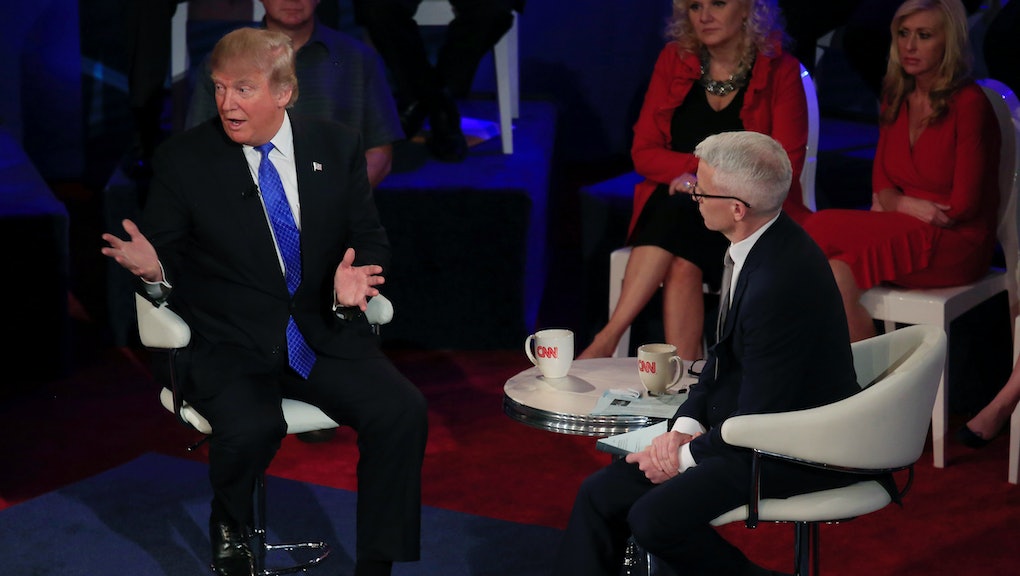 Donald Trump disavowed a pledge he made to support the eventual Republican presidential nominee. The dramatic announcement came Tuesday during a CNN town hall in Wisconsin where fellow candidates Ted Cruz and John Kasich also appeared eager to back away from similar pledges.

"Honestly, he doesn't have to support me," Trump said of Cruz after moderator Anderson Cooper spoke of the Texas senator's equivocations about supporting Trump in a general election. Trump likewise said he no longer felt bound to blindly back the eventual GOP nominee. "We'll see who it is," said Trump.

Read more: The RNC Loyalty Pledge Says Everyone Has to Endorse Trump if He Wins

While most of the candidates have, at some point in the process, pledged to rally behind the eventual Republican nominee, such statements are falling by the wayside as the campaign gets downright nasty. Trump and Cruz spent much of last week in a drawn-out slugfest over the comparative attractiveness of their respective wives.

"He started it," Trump said Monday of the spat referring to a suggestive picture of his wife Melania that was promoted by the anti-Trump super-PAC in the run up to the Utah caucus. Cooper shot back that Trump's rationale was "the argument of a five-year-old." (Trump's response? "It is not!")

Despite attempts by the Republican establishment to stop him, Trump remains the odds-on favorite to win the nomination, but should Trump fail to get the 1,237 delegates required to clinch the prize, anything can happen.