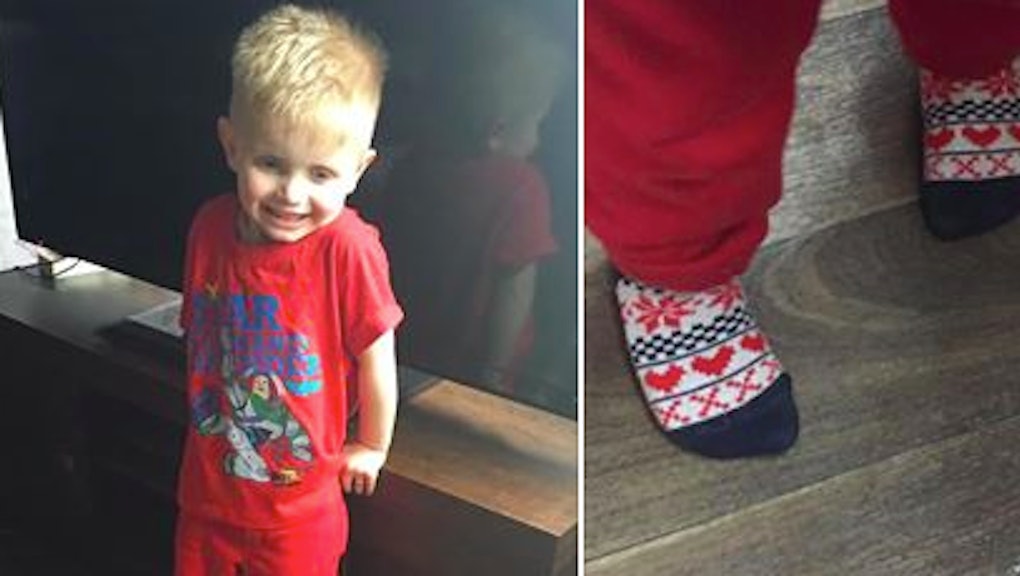 U.K. mom Shona Campbell lets her 3-year-old son, Harry, pick out his own clothes, and he happens to love hearts and pink and other seemingly innocuous colors and patterns. Campbell doesn't see anything wrong with her son's taste — but some other people do, apparently.

Read more: David Bowie Proved That Style Has No Gender — Over 40 Years Ago

On Thursday, Campbell said, she overheard another child at Harry's nursery school mocking him for having "girls socks," aka socks with hearts on them. What's worse, Campbell said, is that the child's mom "agreed" and joined in laughing at Harry.

Campbell was so appalled by the bullying that she took to Facebook to defend her son's clothing choices, and to call out the other mother for perpetuating gender stereotypes. Her Facebook post has since been shared over 100,000 times and has racked up dozens of comments.

"To the mother at nursery picking up your child, you may have thought I didn't hear you, but let me assure you I did!!" Campbell wrote on Facebook. "When your child pointed out my SON had love hearts on his socks and mocked them for being GIRLS socks you absolutely tore apart my faith in this world, because you agreed and laughed along with your child."

"Why should we teach our children that certain things are for girls [or] boys?? If my son wants to wear a dress, he can!! If he wants to wear a big fluffy hat, he can!! And if he wants to wear socks with love hearts, HE CAN!! I am bringing up my son to be whoever he wants to be, and I do not appreciate people like you poking fun at him, telling him he's wrong for what he wears or dictating what he should or shouldn't do [or] wear."

Campbell told Today she didn't say anything in front of Harry because "he didn't even know something was happening," but she hopes that by sharing the story on Facebook she can encourage others to reconsider gendered ideas about what boys and girls should and shouldn't be "allowed" to wear.

"If I could make just one person change their thoughts," she told Today, "and allow their boy to be a princess for a day if he wanted to and realize it's not going to hurt him, it's not going to kill him, it won't make him any less of a boy and see that he's just a human, and happy, then I've done something right."