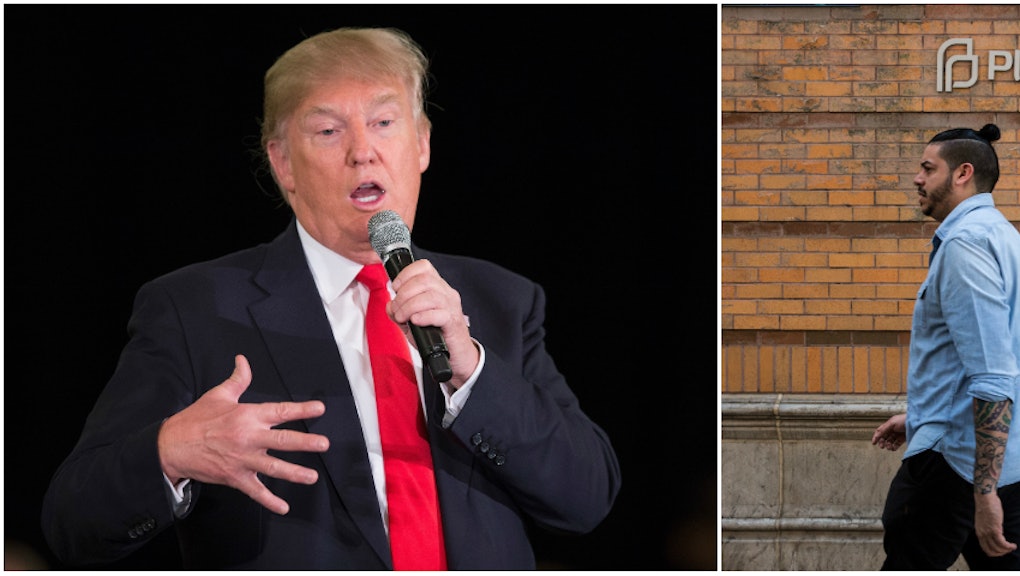 Frontrunner for the Republican presidential nomination and former holder of "pro-choice" views Donald Trump said Wednesday in an interview with MSNBC's Chris Matthews that he believes "there has to be some form of punishment" for women who have illegal abortions. Almost as quickly as the criticism started rolling in (and as leading anti-abortion groups started to distance themselves from him), Trump backpedaled, arguing that a woman who has an abortion "is a victim in this case, as is the life in her womb."

In accordance with Trump's view, there might well be another overlooked "victim" of abortion, especially in light of another comment he made during the conversation with Matthews. When he asked Trump whether a man should also be responsible for a partner's abortion, Trump reportedly said "no."

Of course, we know that's not the case; ask anyone who's ever actually had sex. Better yet, ask the men whose partners have actually had abortions, who don't have many opportunities to discuss their experiences with the procedure in the first place.

The growing push to talk more openly about abortion, a procedure 3 in 10 women will undergo by age 45, has focused almost exclusively on the experiences of the people who actually have abortions, and that's not without good reason. In a political and social climate where women's right to control their own reproductive health is constantly under siege, there's very little room for men's voices to enter the conversation.

"For very understandable political reasons, we need to frame the choice around abortion firmly in women's hands, because anytime we've ever seen anything else, it's a worse situation," Charlie Glickman, a sex and relationship coach and board member of Exhale Pro-Voice, a post-abortion counseling organization, said in an interview with Mic. "But that means that as part of that, we don't actually get to hear men talking about how it impacts their hearts."

Stoddard and his partner, Liz, have been together on and off for nearly a decade, and have had many conversations over the course of their relationship about whether they want kids. They've decided that "raising a family is not our priority," an agreement that was tested when Liz unexpectedly became pregnant in 2011.

"When it was first apparent my partner was pregnant, we were states apart [because I was doing] contract work almost 1,000 miles away. I was not ready for the changes that I expected fatherhood to bring, and I [felt I] had to pull my hat down tight and hang on. The trip home was unusual: We met in an airport concourse, both of us finishing up work trips, and I knew that if I was going to live with myself, the first thing I needed to do was to put [aside] all the misgivings and depression that had filled me and just give her my best self.

"I was shocked when my partner described her uncertainty at whether she was ready to pursue an abortion, especially after [all our] stressing over getting birth control, discussions about the cost and imposition of condoms versus birth control and ironing out the side effects of less tolerable birth control options. ... We would have potentially had a more alienating [abortion] experience if our discussions were over the phone, at a distance, as opposed to sitting on a couch, alternately holding hands, crying, and staring fiercely at each other while we got to the point of hammering out a plan. [We had to] make the time to drive out of state because we live in a place where it is simply not an option to find a caregiver locally; for us it was 6 hours one way [to a clinic].

"I could think about nothing else besides my partner...and what it might look like to move forward."

"The afternoon [of her abortion], I could think about nothing else besides my partner, her experience that was so ultimately more complicated than mine and what it might look like to move forward. In the moment, I felt more alone than any other time in my life. I felt so estranged that it made the vacuum of walking around after my mother's death seem abstract and faint. I only knew one other person, a male friend of mine, who had dealt with abortion and we had barely talked about it — and he was the person who I considered my best friend."

Smith was in high school when his then-girlfriend became pregnant and subsequently decided to have an abortion. After being confronted with his own lack of knowledge about the procedure and the health care options available to him at the time, Smith was inspired to become involved in reproductive rights advocacy. He now works for Planned Parenthood.

"I remember my first reaction like it was yesterday, because I was so scared. I didn't know what kind of options were available at all. If anything, I thought it was going to be this big surgical procedure, but I didn't even know if she was going to want an abortion. Talking with her was very difficult. I didn't know what to do or what to say. I think she felt the same way.

"She wanted to go [for a clinic consultation] with a friend instead of me. I remember feeling pretty relieved this wasn't going to be something we had to tell our parents about, and being relieved you could take a pill. It would be expensive and painful for her, but I could be there for her throughout the process. I think she was relieved by that as well. I don't think she fully understood what her options were before [she went to the clinic]. We didn't really talk much about ... the decision to have an abortion. I remember saying, 'This is your decision. I'm going to be supportive either way.'

"I wanted to be with her, but I think I was willing to do whatever she wanted."

"If it were up to me, I would've wanted for her to get an abortion. [Having a kid] would've drastically changed the trajectory of my life ... but I don't think at the time I was necessarily concerned about all of that. It was more an immediate feeling that I wanted her to decide what was best. I wanted to be with her, but I think I was willing to do whatever she wanted.

"I don't think she was comforted by me so much. I think she appreciated what I said and very much did feel like it was her decision, but I think she felt kind of alone in that decision. I think that's why she wanted to go with a friend. I wanted to talk about it a little bit more. She didn't. There was kind of a strange dynamic in our relationship for a little while.

"I've always wanted to be a dad, it's something I still want to be at some point. There were a lot of those feelings I didn't talk much about. I just remember thinking more about her, not as much about my own feelings.

"I don't really have an issue talking about the abortion; I just haven't. Part of the reason is because of the privacy of my ex-girlfriend, and because I don't want to say anything she wouldn't want to say. This is about her. It's about me too, but it's about both of us."

Shortly after getting married, Schlesinger and his wife, Nicole, started trying to have a baby, and on "what must've been the first attempt," Nicole got pregnant. When the couple went for their first sonogram at 20 weeks, however, they learned the fetus had "a constellation of abnormalities," with little to no chance of survival. Together, they agreed to terminate the pregnancy, an experience Nicole has spoken about before. They recently had their first child.

"We were at the sonogram, figuring out the first signs of our pregnancy, and we found out it was a boy. Then all of a sudden the room got quiet as the technician was noticing something; she was taking measurements [on the screen], and noticed some weren't working out.

"We went to go to the fetal care specialist, and they did another sonogram which confirmed results of first sonogram: The pregnancy was not really looking viable. They couldn't really tell us too much, but there was definitely something wrong, but we didn't really know why or what was causing it. The nurse and the doctor didn't really say it straight-up, but hinted around that we had to make a decision [to keep the pregnancy or not]. My wife and I kind of looked at each other and realized what they were speaking about. We never really thought this decision would be the case.

"We sat down at the reception area of the hospital and looked at each other, and agreed that if the baby wasn't going to be healthy, we didn't want to continue the pregnancy — for the baby's sake more than anything. It was also for my wife's sake, for the risk of carrying the baby to term not knowing what could happen. We decided that we would do all the tests we can to get a more definitive answer about what's going on. The hardest part was waiting for results to come in. My wife was noticeably pregnant at that point. It was a really difficult time in our life.

"I would say this was just as much my issue as it was my wife's, it just wasn't my body. We were going through everything together. The whole entire pregnancy, every struggle she had along the way — even though I couldn't necessarily relate to her struggles, That carried over into the difficulties we were having [deciding to terminate]. I'm the other half of the equation here. I feel the same turmoil.

"I wanted to be with her [for the termination procedure], but I couldn't; I'd go in as far as they'd let me go [at the clinic]. I was able to help her through the last exam room before it happened. I had to wait in the waiting room, and the waiting room of an abortion clinic is not a place anyone wants to be. It was packed, there was barely a chair to sit. There are just so many stories if you look around the room. They're stories you don't necessarily want to know.

"Abortion is not a women's issue. It's everyone's issue. Even though a woman goes through pregnancy, it's a process we all have to respect. This issue of being pro-choice is something everyone, males especially, need to realize affects them as well. We love these women in our lives. They're our friends, our girlfriends, our spouses, our daughters, our sisters. Men need to listen up and realize this affects them. They need to be aware of the possibilities that things can go wrong, and the importance of being able to have the choice to have an abortion if necessary. Even though men don't carry the burden, we support the women who do."