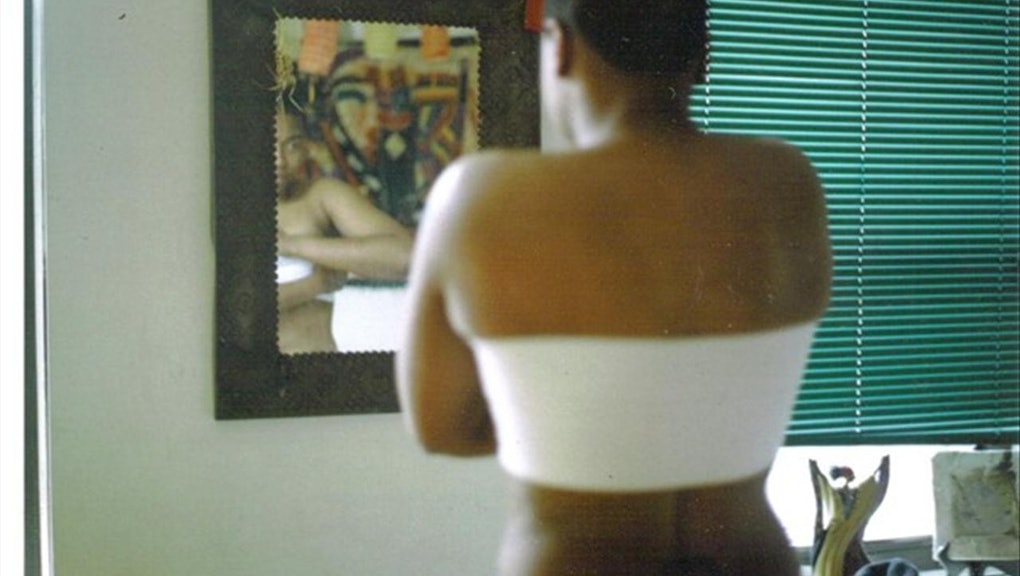 For Transgender Men, Clothing Can Be Self-Determination

It's been 20 years since a bra has been a part of my life, and even then it had no significance at all. It's not like I just gave it up one day; being a man of trans experience isn't a process whereby one day, you just switch it up and throw away all feminine signifiers. It's not a single ceremonious event.

The most I know about bras is that my wife has pretty ones; they're soft, ornate and expensive, and she loves them. I watch her glow with delight looking at lingerie in Victoria's Secret while I sit in the a corner waiting for her to beckon. I love to see her happy, and I also know that elation is worlds away from me and how I ever felt about having a bra on a body part that I had little to no relationship to. My closest relationship to a bra now is being able to take it off with a snap of my fingers.

My closest relationship to a bra now is being able to take it off with a snap of my fingers.

In another life, I went to an all-girls high school that prided itself on the cultivation of femininity and womanhood. Skirts and dresses, bras and blouses were basically a prerequisite. I reluctantly followed the dress code because I didn't want to cause too much of a fuss and not complete my four year high school bid.

I never really looked back on that feminized version of myself after graduation day. I wanted to put the awkwardness of it behind me. Once I had a glimpse of adulthood and was able to decide what my body was going to look like, I jumped headfirst into masculinity.

For a lot of trans men, having to grow up in girls clothes is a traumatic misgendering every single day. But the process of coming into masculinity is as varied as masculine expression itself. Queer masculinity makes room for men to define their bodies and manhood by what feels right to them. One element of that can be physically changing the body — and thus changing one's clothes.

Each person experiences this differently. Myles Brady, individual giving officer at Howard Brown who was recently featured on Say Yes to the Dress with his fiancee, transgender advocate Precious Davis, always felt at ease in his body.

"'I wanna be like daddy,'" he told his parents at five years old. "They thought I meant I wanted to be a doctor like my father but I was like no, I wanna be me a man," Brady explained in a sit-down interview.

So his parents allowed him to lead the way on defining his gender. "I was raised just like a regular little boy," he said. "The milestones they hit, I hit. I've never had the experience of having to go from this to that, that's why top surgery was never important to me."

For me, having a flat chest wasn't just integral to my gender identity — it was a source of freedom. Being shirtless on the beach and feeling the sun on my bare skin is a feeling many trans men yearn for. After a childhood and adolescence in which I was told that my female body meant that I shouldn't run, jump, play or get dirty, chest reconstruction became a reclaiming of my autonomy.

It would also be my entry into "black cool," the effortless "classic man" style that I admired in my dad and uncles, that only my hard flat chest could accommodate. I kept my grandfather's cream colored suit and mint green shirt in the back of my closet anticipating the day I could put it on and be affirmed in my authentic gender and not reminded of the one appointed to me.

Top surgery — or double mastectomy and chest reconstruction — is a common procedure among trans men.

"For the thousands of guys seeking surgery, there are only about 40 good doctors to choose from," Mister Cris, Executive Director of CK Life, a transgender medical resource center operation out of the Bronx, said in a phone interview. However, in the last five years, more and more insurance companies are covering top surgery as a medical necessity; in 2015 trans folks were finally able to access healthcare under Medicaid.

I finally had my top surgery in January 2011. The moment I woke up and literally felt a weight lifted off of me, I burst into tears. Months following, I worked out relentlessly to make my chest tight squares of muscle that made a dress shirt fall just right. I could wear a t-shirt in the spring without worrying about being misgendered or mistreated. It finally felt that I could come into my own sense of style.

Prior to surgery, I binded my chest for years with bandages or duct tape squeezing my ribs and bruising my back. I wore two or three shirts over a chest compression binder even in the summer to get a seamless look. It was uncomfortable and hot, but it was worth it. To look at my profile in the mirror and not see a a curve in front of my body (maybe just a little belly, which is perfectly fine) and for a shirt to drape across my shoulders with no signifier of my imposed gender was freeing.

But now, I didn't need any binding. I could wear a fitted v-neck T-shirt with no button-down over it. I could wear a tank top in the summer and not worry about my binder showing through. Having my chest corrected allowed me to strip down my personal aesthetic and not hide my body anymore.

Having my chest corrected allowed me to strip down my personal aesthetic and not hide my body anymore.

The body is just one piece of gender identity; as the only barometer of trans-ness, it can't truly reflect the full complexity of the trans experience. But clothing is meaningful — and the men's fashion that I swooned over, I was now a part of. My clothes began to fit to my form and not the bulk of binders and T-shirts I had to wear. My personal style became a part of my self-determination.