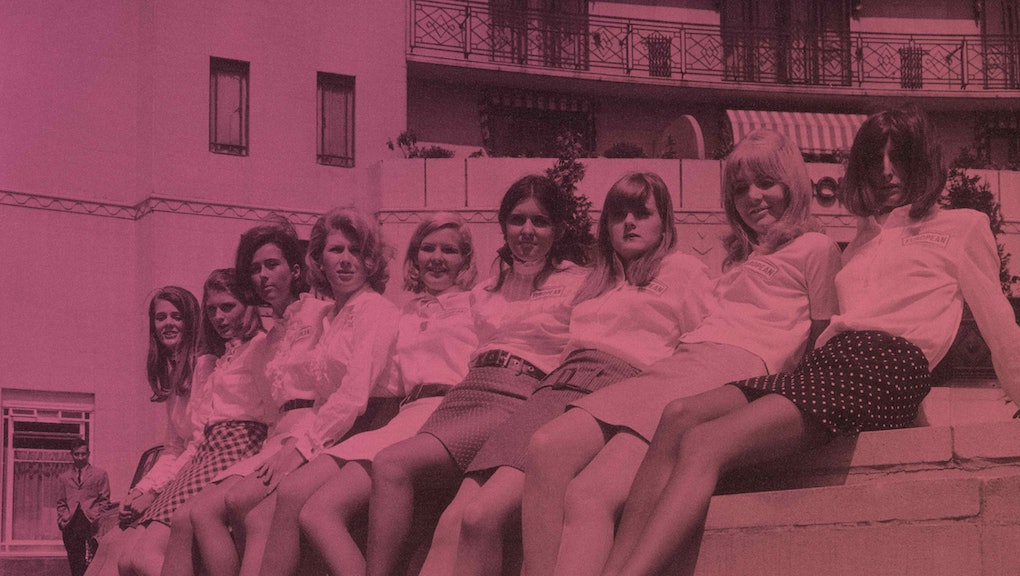 Power Clothes: The Unabashedly Feminist History of the Miniskirt

In 2015, a city in Alabama proposed that the miniskirt be banned. Council members argued that it was really all about respect. They argued that God just wouldn't be a fan. "I prayed about this," one of them said.

Just months later, a Kansas state senator told his female staff that miniskirts were simply not up to code in the office. He said that they were inappropriate, he'd seen women dressed provocatively in this manner before and he considered it all very distracting.

Clearly, the miniskirt and the women who still boldly wear them are powerful. And as it turns out, when you look back in history, they really always have been powerful — and a symbol of how much of it women have.

Rebellious girls have been around since basically the beginning of time — but that shouldn't really be all that surprising, should it?

All the way back in 5000 B.C., as humankind was busy hunting, gathering and figuring out how to build the wheel, they also had the thought, "What if I wrap a piece of fabric around my hips real short like this?" (or something). We know that because of a figurine of a young girl wearing a short skirt that archaeologists reportedly uncovered and dated back to some time between 5400 and 4700 B.C.

Archaeologists would also come to discover that ancient Egyptians dug the short look as well, via a few found frescos depicting young women (who may actually be "acrobats") donning short skirts. And women weren't the only ones in on the fun, with men during this era wearing loincloths, which were basically more deconstructed versions of the miniskirt. Blame the hot weather, or their immaculately on-trend fashion sense.

For hundreds of years after, miniskirts swayed out of favor — until the Qing Dynasty in China (which lasted roughly from the 1600s to the 1900s) brought us our very first miniskirt-wearing girl gang: the Duan Qun Miao. These women, little did they know it, were setting a serious trend way back in the 18th century with, reportedly, "miniskirts that barely cover[ed] the buttocks."

Ah, we love women who break the rules.

1940s and '50s: Miniskirts are strictly fictional (science fiction, that is).

After the Miao women, it would be a few decades until humankind — and fashion — were ready to fully embrace the short skirt once again. In the 1920s, dancer Josephine Baker famously created a miniskirt of her own with artificial bananas. Twenty years later, in the 1940s, they were seen in pinup images by artists like Earle K. Bergey. By the 1950s, they were reserved mainly for "women of the future," meaning women who starred in sci-fi movies and TV shows.

Notably, in a 1950 TV series called Space Patrol, the women wore micro miniskirts — a far cry from the demure clothing of that era. But don't think that the women on Space Patrol were stereotyped into being sexy sirens because of it. In reality, the female characters were empowered experts in their scientific fields — with their skirts as an afterthought. Also surprising is that the show only received one complaint about the skirts, when one of the girls decided to climb a ladder, with the camera following close behind.

A total mistake, we're sure.

In the 1960s, wearing a short skirt switched from being an individual fashion decision to a political act. As young women gained a heightened awareness of how society treated them differently than their male peers, they came together to fight for their right to wear as short a skirt as they damn well pleased, all while the general atmosphere around women's liberation began to shift.

In just one garment, one could feel the cultural zing of women's rights, feminism and liberation alongside the fight for female birth control. Mostly worn by young women who were taking part in those debates themselves, the skirt encapsulated the movement.

And it just so happens to be a woman who made it all possible. Mary Quant first coined the term "miniskirt," after her favorite car, the Mini. The designer started toying with shorter hemlines in the late-'50s at her London boutique, Bazaar. By the mid-'60s, the miniskirt was officially born. However, there were a few designers who were onto the miniskirt a few years earlier, like Paris designer André Courrèges and John Bates, who is most known for his mod minidresses. But for the most part, it's Quant who commercialized the look.

"Middle-aged businessmen would beat on the window and shout 'It's obscene, it's disgusting,'" Quant told Vogue U.K. Clearly, not everyone was a fan. Coco Chanel even called the skirts "just awful," according to the BBC.

Despite Chanel's personal feelings, however, women embraced the look in cities like New York, Paris and London, where models like Twiggy and Jean Shrimpton were all the rage. No longer were women expected to dress like their mothers; they now had the option to dress in bright Crayola colors, short skirts and bright tights to showcase their legs. Although the look would soon be overshadowed by the boho bellbottoms of the '70s, the miniskirt remained an iconic signifier of a certain type of liberated young women.

Maxis and knee-length skirts were more en vogue in the 1970s. Why? Since you couldn't get any higher than the mini, skirts could really only go longer .

That being said, women like Gloria Steinem continued to hold on to the idea that the miniskirt was a transgressive act, wearing them to rallies and speeches, proving that you can be strong and wear feminine clothing at once. As Vanity Fair recalled of her dress from the era: "[a] miniskirt riding outrageously high over those spectacular racehorse legs, a glittering gold tunic that made her stand out instantly in a crowded room." According to the Washington Post, she was the "the miniskirted pinup girl of the intelligentsia."

Throughout the decade, the trend extended even more to women who weren't feminist icons, with secretaries notably taking up the shorter look as well. For them, it was really no longer a feminist act of rebellion so much as an acceptable clothing style any woman could participate in. Though it was still an edgy one, as women like Debbie Harry clearly exhibited.

During this time of transition between short skirts and long, the miniskirt got a makeover. In the early 1980s, it was all about the rah-rah skirt — skirts that look similar to a cheerleaders', with pleats all around. Compared to the A-line miniskirts of the past, these looked far more youthful, like a Catholic school uniform. Appropriately, it was teens who catapulted the look into favor, wearing the short skirt with high knee socks. Soon, high fashion designers and stars like Cyndi Lauper would embrace the flouncy, short skirt as well.

As the decade ticked on, rah-rah skirts saw the rise of a less PG counterpart. Video vixens of the '80s and high fashion models loved a good tight, metallic skirt, as did Madonna, who paired hers with lace tights. While the rah-rah skirts were more about being youthful and girlish, Madonna's were more about proudly embracing her own adult sexuality — a sartorial split personality, if there ever was one.

While the '80s birthed two very different types of miniskirts — one that epitomized girlish youth and another that was proudly sexual — the '90s saw the intersection of the two. Now, the more adult miniskirt was adopted by teenagers too. It was about being sexy, but could be played with in order to toe the line between "good girl" and "bad girl."

No other image showed that more clearly than Britney Spears in her 1998 video for "... Baby One More Time," in which she plays a schoolgirl — but not just any school girl... a bad school girl. And a million fantasies were born. At the time, there was outrage over Spears, who was just 16 when they filmed the video, baring her midriff. But according to a number of interviews from the era, she was just trying to be an authentic teen, who may or may not have walked into a Kmart looking for a short skirt.

Walking the line in a way that teased the line between girlish youth and adult female sexuality turned out to be an electric match not only for Spears, but for women like Beyoncé, Christina Aguilera , Jessica Simpson and the Spice Girls, who proudly screamed "Girl Power!" while wearing tight little skirts. It was a slogan that led Rolling Stone to write in 1997 that they were "selling themselves as feminist cheesecake," yet what they were really doing was showing millions of girls around the world that how you dressed didn't define your worth.

2000s: The miniskirt goes denim and loses its edge.

After the '90s onslaught of miniskirts, the garment had become more accessible and socially accepted than ever, losing a bit of its provocative edge. Rather than skirts defining a woman and her intentions, it became just another item of clothing.

An example of this is the versatile and entirely casual denim miniskirt. If someone had a bottle of air from 2005, it would probably smell like Abercrombie & Fitch perfume, thick with self-tanner and denim miniskirts. Rather than miniskirts being saved for pop icons, they were now on the streets of New York City — or Laguna Beach.

Instead of skirts screaming "Girl Power!" now they screamed, "Will this go with my hot pink Hollister tank top?" and "Can I wear Uggs with this?" (The answer to that question is no.) While pop stars still embraced the look, middle school girls could too, and could pick one up at their local Limited Too (probably one encrusted with rhinestones).

Still, thousands of years since they first broke onto the scene, the women who wear miniskirts are powerful and influential. And it's not simply because they're wearing them, but because, at this point, they are a non-factor in a woman's ability to be a force. Especially because, nowadays, the way in which a woman can be rebellious or edgy involves wearing no pants or skirts at all, or even participating in #freethenipple.

Really, miniskirts aren't such a big deal. Today, they are just skirts made of denim or cotton or lycra or whatever. They're on sidewalks just as much as they are on runways or red carpets.

Obviously, some old men really don't want women to wear them. Some still believe that they are not only inappropriate, but are to blame for sexual assault (rather than, you know, rapists). But you know what's better than caring about what those men think you should wear? Not giving a shit about it.