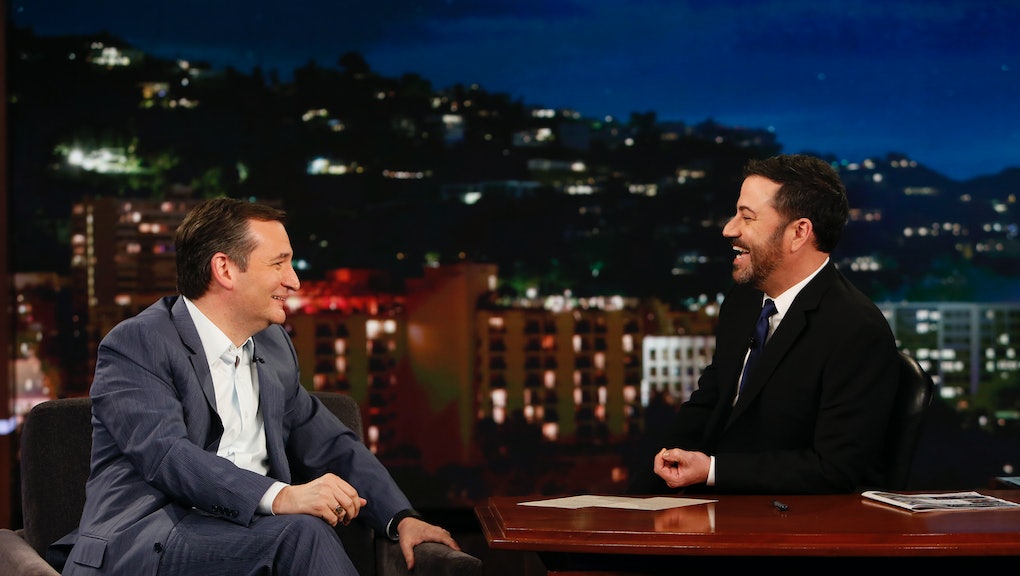 GOP presidential candidate Ted Cruz has a well-documented problem with likability. His fellow senators, former president George W. Bush and even his freshman year college roommate have all spoken up throughout Cruz's campaign to share just how much they dislike him.

On Wednesday night, Cruz seemed to be trying to earn back some points when he appeared on Jimmy Kimmel Live! to talk about his candidacy.

Shortly before Cruz came on stage, the show aired a segment weighing potential April Fools' Day pranks, one of which involved cars, backup cameras and a photo of Cruz's rival Donald Trump. So when the conversation inevitably turned to Trump, the Texas senator got some laughs with this comment:

"I will say, I was watching the earlier part of the show, and if I were in my car and getting ready to reverse and saw Donald in the backup camera, I'm not confident which pedal I'd push," Cruz said.

Before making the joke, Cruz diplomatically skirted Kimmel's questions about Trump. When Kimmel asked who he hated more, Trump or President Obama, Cruz answered that he disliked Obama's policies more, and nearly dropped the matter by saying, "Donald is a unique individual."

But it's possible Cruz's jab at Trump will be overshadowed by his nod to rumors that he is the Zodiac Killer which came when Kimmel asked about his favorite cereal. "Cereal or serial killer?" Cruz asked.

Watch the rest of the clips here: