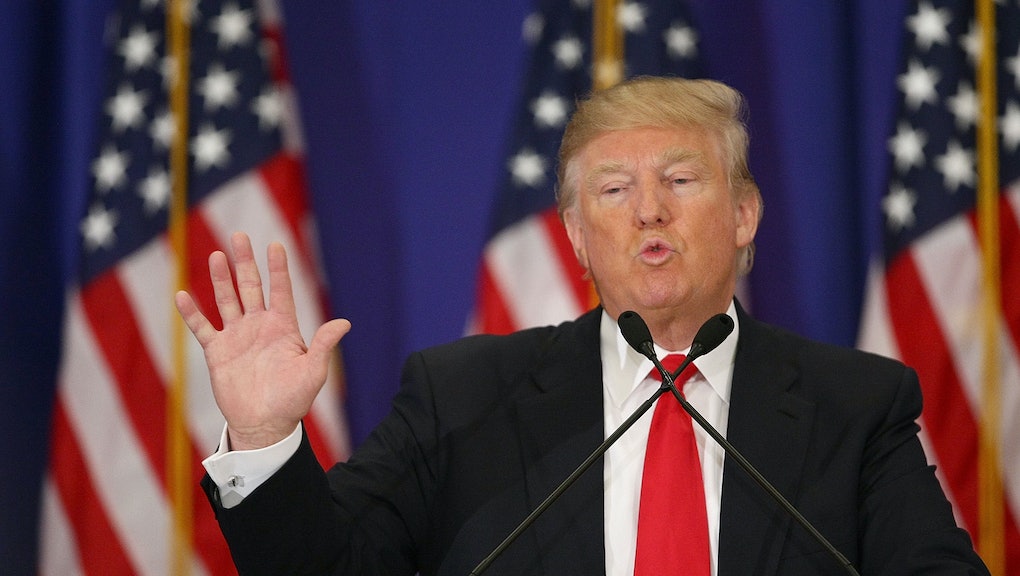 Back in the good old days, it seemed like a single gaffe could sink a presidential campaign (remember when Howard Dean yelled ... or when Mitt Romney suggested that 47% of voters "believe that they are victims"?) but with the Donald Trump news cycle rolling 24/7, it can feel like most of the outlandish things the media mogul and Republican presidential frontrunner says at his campaign stops and television appearances are buried by whatever he says the next day.

So if you're struggling to remember some of the most unbelievable Trump moments of the campaign to date, here's a refresher of some of Trump's best worst quotes. Unlike Dean's "Byahhh" or Romney's implication that half the country was lazy and entitled because they wanted free health care, none of these comments have stopped the Trump train... yet.

Try and figure this one out! Trump bragged about his numerous websites during his campaign announcement in June — the same speech during which he implied immigrants from Mexico are "bringing drugs" and "rapists."

Back in August, Trump mocked FOX host Megyn Kelly, saying she had "blood coming out of her wherever."  In an appearance on NBC's "Meet the Press" to defend his remarks, he told Chuck Todd that women couldn't insult his looks because he is "so good looking."

"And actually, we've had times where the weather wasn't working out, so they changed it to extreme weather, and they have all different names, you know, so that it fits the bill ...  Obama thinks it's the No. 1 problem of the world today. And I think it's very low on the list. So I am not a believer."

Trump spoke to conservative talk show host Hugh Hewitt in September about climate change, or rather, his insistence that it isn't real and he won't believe it until "somebody can prove something" to him.

"Look at that face! Would anyone vote for that? Can you imagine that, the face of our next president? I mean, she's a woman, and I'm not s'posedta say bad things, but really, folks, come on. Are we serious?"

That's Trump insulting former Republican rival Carly Fiorina in a Rolling Stone interview published in September. He later said he had been referring to Fiorina's "persona," not her looks.

"I would bomb the shit out of 'em. I would just bomb those suckers."

Yup, that's Trump speaking about ISIS in November and offering his military "strategy."

"Donald J. Trump is calling for a total and complete shutdown of Muslims entering the United States until our country's representatives can figure out what the hell is going on."

Trump read aloud from his own campaign statement in December, proposing a ban on all Muslims entering the United States. To clarify, that's 1.6 billion people worldwide who would no longer be welcome in the U.S. because of their religion.

"You're not going to support me, because I don't want your money ... You want to control your own politician."

Trump invoked a tired, and offensive stereotype about Jewish people and money when he addressed the Republican Jewish Coalition in December. He also told the crowd, "I'm a negotiator, like you folks."

Trump spoke about the loyalty of his supporters at a campaign rally in Iowa in January and also sort of implied that him shooting someone in the middle of a crowded New York City street was within the realm of possibility.

"We're going to protect Christianity. I don't have to be politically correct."

That's Trump speaking in January to Christian students at Liberty University in Virginia. During the same speech, he mistakenly referred to Second Corinthians as "two Corinthians."

After coming in second in the Iowa caucuses to Texas Sen. Ted Cruz early February, Trump accused his rival of "stealing" the victory and sent out a series of tweets calling for Cruz to be disqualified.

That's how Trump responded to the presence of a protester at a Las Vegas rally in February. As the man was escorted out, apparently peacefully, Trump remarked that "in the old days" protesters would be "carried out on stretchers." A month later, Trump announced that he was considering paying the legal fees for a Trump supporter who was arrested for allegedly sucker-punching a protester at a rally in North Carolina.

"Look at those hands, are they small hands? And, he referred to my hands, 'if they're small, something else must be small.' I guarantee you there's no problem. I guarantee."

Yes, this really happened. During a Republican debate in Detroit in March, Trump defended the size of his penis after Florida Sen. Marco Rubio insinuated it was small at a campaign stop a few days before. In the debate, Trump also called Rubio "this little guy" and "little Marco."

In addition to sparring over penis-size, Trump used the March 3 Republican debate in Detroit to advocate for the use of torture and referred to "these animals over in the Middle East that chop off heads."

"These protesters are honestly, they're very bad people."

This was Trump's response when asked about violence against protesters at his rallies during an interview with the editorial board of the Washington Post in March. A week after the interview ran, Trump's campaign manager, Corey Lewandowski, was charged for an alleged assault that took place at a Trump rally on March 8.

"There has to be some form of punishment."

In March, Trump told MSNBC host Chris Matthews that, were abortion illegal, there would have to be "punishment" for women who undergo the medical procedure. He later walked back the remarks, releasing a statement saying that "the doctor" would be held "legally responsible."