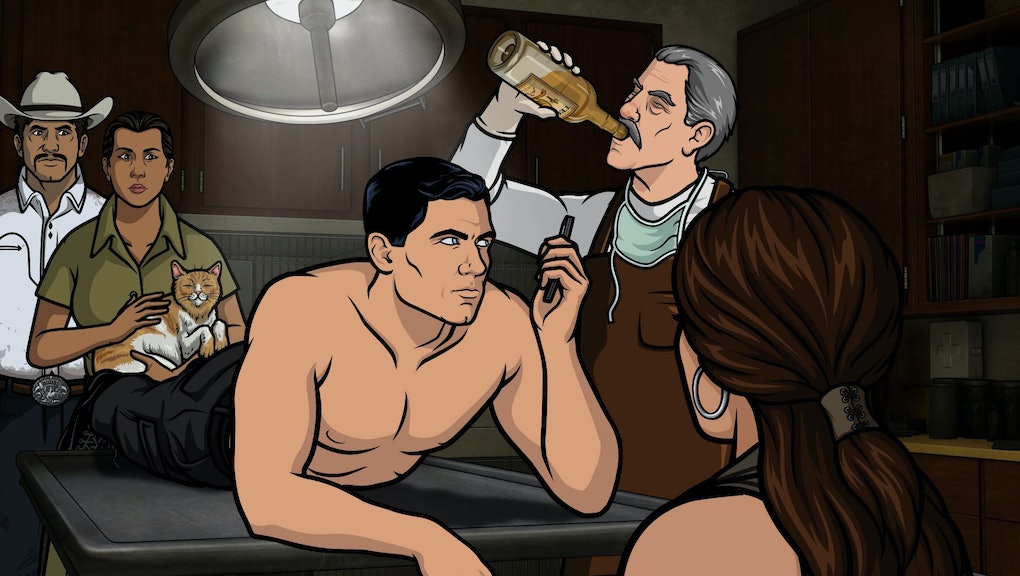 Archer's pilot episode establishes its chiseled animated lead as "the world's most dangerous spy." Sterling Archer's similarities to Ian Fleming's James Bond, super spy par excellence, are unavoidable. Adam Reed's script for that same episode called for him to be introduced wearing nothing more than "a tight pair of Daniel Craig-ian boxer-briefs."

The sexualization of an animated character — let alone a womanizing one — was only the first taste of the show's bold stance on sex that would come to define it. Archer, conceived as an animated spoof on the most famous paragon of heterosexuality, if not an outright example of toxic masculinity ("Let's not forget that [Bond is] actually a misogynist," Craig reminded everyone ahead of Spectre's premiere), has become the protagonist of one of the most sexually progressive shows on television.

In fact, the greatest way in which Archer has morphed into a sexually progressive show has been in its depiction of female agency. The women in Archer are no mere puntastic Bond babes. They take control. This is, after all, a show that features a character (Judy Greer-voiced Carol/Cheryl) who has a fetish for being choked. "You seriously don't think that's hot?" she asks her co-worker Pam. Her reply? "I seriously think you're scary."

Likewise, Pam (Stacy Nash) and Lana have developed into intelligent and sexually active women who know what they want and demand nothing less: "Come on, you were pushin' rope!" Pam bemoans while criticizing Archer's sexual prowess after their first sexcapade. Even Archer's mother, Malory (Jessica Walter), proudly embraces her sexuality. In the first episode alone we see her pleasuring herself while talking dirty on the phone with her Soviet lover. We later learn she also keeps several vibrators on hand at her desk because why wouldn't she?

The level to which the writers have concocted sexual situations and pairings among its cast has led not only to a surprisingly detailed Reddit thread ("Who's had sex with whom?") but also to a pretty nifty visualization of these interconnected sexual trysts. What began as a workplace comedy has turned into a wildly inventive and ambitious series that is all too happy to push boundaries and find crazier and crazier situations where it can disrobe its characters.

Sex is not some shameful facet of these characters' lives or one which remains conveniently off-screen. Instead, it is central to their characterizations. Even the fact that the show takes care to sexualize and ogle Archer's body ("Do you not see me rocking this chiseled slab of hard man body?") clues audiences into the sophisticated vision of gender and sexual equality that the show espouses.

Or, as a one-off character once put it, "Look, I'm a sexual being. If that is shocking to you, so be it."