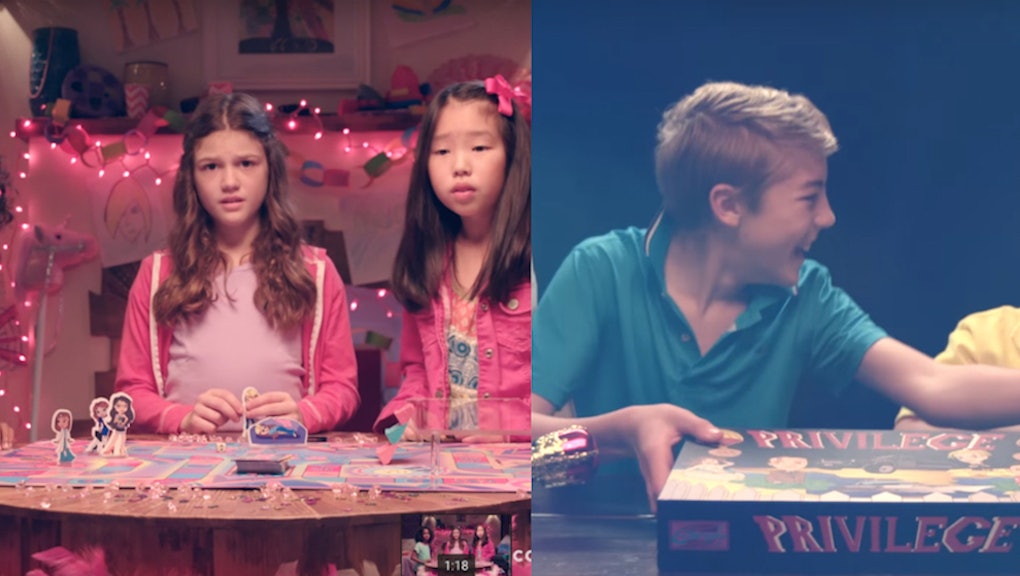 There's no doubt a glass ceiling hangs above women and minorities in American society, with both groups often being left out of many of the opportunities white men enjoy in both work and leisure. For that reason, the geniuses at Comedy Central imagined a board game a la Game Of Life, in which the realistic outcomes of a woman's life in the United States are represented in a game properly titled "The Glass Ceiling."

From the makers of "Shop Till You Drop" and "Guess Who's Pregnant!" "The Glass Ceiling" is a game based on the limited advancements in careers women can achieve. Three girls are seen excitedly opening the board game and beginning their adventures, exclaiming, "I'm going to be an engineer," "I'm going to be a lawyer" and "I'm going to be the nation's number one investment banker!"

A cheery voice laughs the three girls' high hopes away, saying, "Oh Stacey, sure you can be an investment banker, but do you really think you can be number one?" The girls then go through a series of examples women in real life typically face, which essentially eradicate any chance of the girls eventually winning the game. "Your Ivy League education hasn't gone unnoticed!" Says one of the girls, offering a glimmer of hope — but only for a moment. "It makes your boss, Doug, feel emasculated," she slowly reads, seemingly perplexed. "The promotion goes to Blake, who didn't even get a degree. Move back one space."

"Your boss sexually harasses you, do you, A: go to HR, B: put up with it, or C: sleep with him?" another girl reads from one of the cards. "Those are my only options? I don't know what HR is, but I guess I'll go there."

The satirical commercial then advertises a game made for boys called "Privilege." The game box opens, featuring wads of cash and cards that say "opportunity" and lines of cocaine. "I love being white!" one boy exclaims. "And privileged!" nods the other.

The video ends with the narrator stating the game Privilege was created by GOP frontrunner Donald Trump.