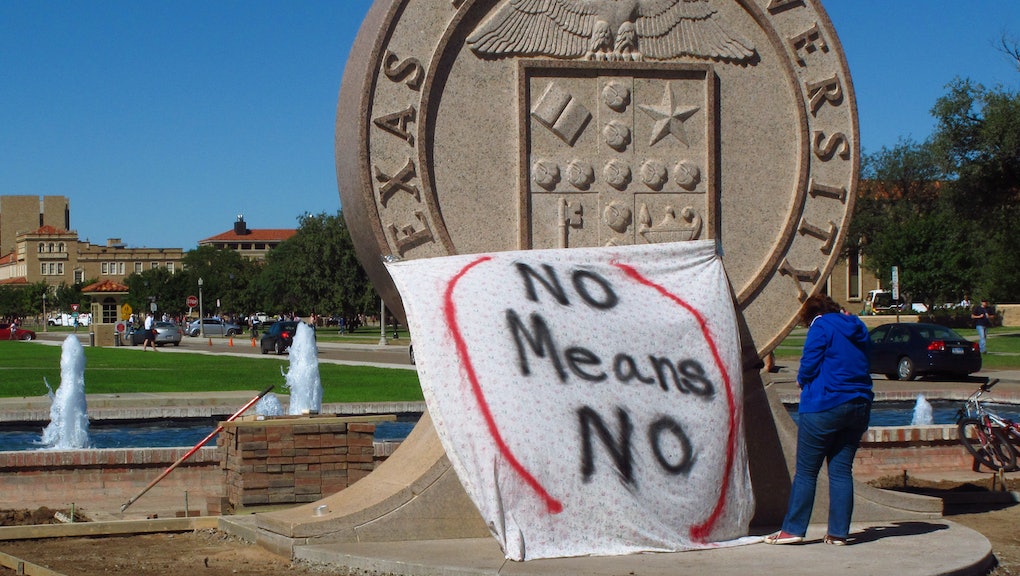 An alarming number of sexual assaults occur on college campuses. As researchers attempt to determine what role serial offenders play in contributing to this rate, they've identified an equally alarming number of factors that facilitate rape, like lack of consent education, binge drinking, social pressure and rape culture. Now, they might have pinpointed another.

According to a study published this week in Violence Against Women, there seems to be a strong link between certain narcissistic characteristics and the likelihood that someone will commit rape. College men who showed traits associated with vulnerable narcissism, like a strong sense of entitlement and a lack of empathy for others, were more likely to perpetrate sexual assault.

That leaves us with an important question: What's the best way to use that information to prevent violence?

The study: In a survey of 234 male college students, a pair of psychology researchers at the University of Georgia, Emily Mouilso and Karen Calhoun, predicted that some of the traits associated with narcissism would be correlated with sexual assault perpetration. Their findings estimate nearly 20% of college men have committed sexual assault. Though the sample size was quite small, the rate is actually lower than some other estimates: In one study, more than 60% of college men self-reported committing acts qualified as rape.

According to the study, men who displayed signs of pathological narcissism — specifically vulnerable narcissism — might be more likely to perpetrate sexual violence by relying on alcohol or even date-rape drugs to incapacitate victims. In addition to having difficulty identifying with other people, vulnerable narcissists might also give off an appearance of high self-esteem masking deep insecurity, as well as feelings of entitlement. Those feelings can allow them to justify their own desires and actions — even when those actions are at the expense of others' well-being.

In the context of current theories on who commits sexual violence, Mouilso and Calhoun found, that makes sense.

"There's more than one kind of [personality] profile that would make you more likely to perpetrate a sexual assault," Mouilso said. "One of those streams is promiscuity — so people who have higher levels of sexual interest and more frequent sexual partners, they're more OK with impersonal sex."

Another "stream of risk factors" that might make someone more likely to perpetrate sexual violence, however, is what the researchers call the "hostile masculinity path," which is borne of "a hostile and angry orientation toward women in general and thinking that relationships are adversarial," according to Mouilso.

"It's more about, 'What can I get out of this person that I want? I don't really care all that much about what they want,'" she said.

What it means for prevention: Clearly, being able to identify any factor that might make someone more likely to perpetrate sexual assault (whether it's narcissism or another pathological condition) is huge for developing violence prevention programs.

As Mouilso and Calhoun's study indicates, research like theirs — which focuses on non-incarcerated populations of sex offenders — can help give potential victims an idea of what traits to look for and avoid. That's especially important given a perpetrator is "less likely to be a stranger who jumps out of the bush," Mouilso noted, and "more likely to be someone you know, like the guy sitting next to you in your intro psych class."

In general, however, sexual assault prevention tends to focus more on teaching women, in particular, to be careful around the guy sitting next to them in psych class — not on teaching that guy or any other guy that they are not, in fact, entitled to engage in sexual activity with anyone who doesn't consent. The emphasis on victims' behavior — specifically, what they can or should do to prevent sexual assault — doesn't just saddle the wrong people with responsibility for avoiding violence or help perpetrators deflect blame. It treats rape as an inevitable occurrence, even though the reason we talk about sexual assault prevention is because it is, indeed, preventable.

But preventing sexual assault doesn't just rely on women knowing how to look out for men with certain characteristics. It also relies on considering the cultural context in which such traits — entitlement and antipathy toward women, in particular — develop. And to some extent, male narcissism is a likely byproduct of living in a society that asks what victims were wearing or how much they drank when they were raped, instead of just teaching all men to stop raping in the first place.