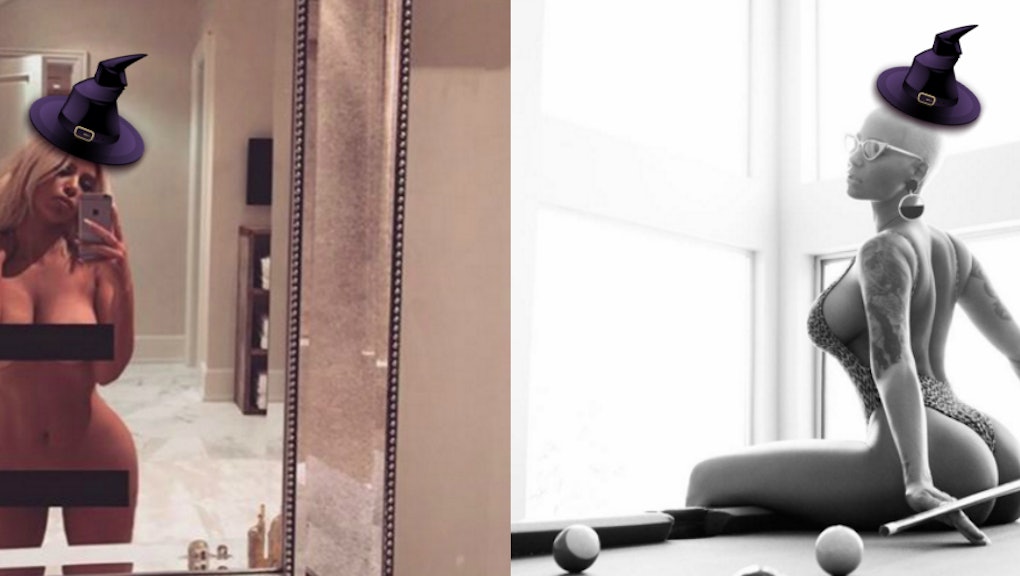 But the latest coven to hit the scene? Well, they're a few good witches — and they are casting spells left and right to abolish slut-shaming once and for all! Its members include Amber Rose and Kim Kardashian West.

On Wednesday, Rose told Us Weekly that Kardashian West is likely participating her second annual SlutWalk event later this year, which everyone knows is the anti-slut-shaming equivalent of that "Hail to the guardians..." witch ceremony from The Craft.

"I think she is [attending SlutWalk]! I think that it will be a great time," Rose, told Us Weekly of Kardashian West. "I think she got slut-shamed a lot, especially because of her sex tape. And I think she has a really cool story to tell."

This induction has been months in the making.

Despite the fact that the "West" in Kim Kardashian West belongs to Rose's ex-boyfriend, notorious slut-shamer Kanye West, the pair posed together in anti-slut-shaming solidarity for a now-infamous selfie back in February.

We can reasonably assume that behind the scenes of this selfie, the two women were stirring a bubbling cauldron filled with anti-slut-shaming potion, playing with brimstone and generally just talking about witch things.

About a month and a half later, Amber gave Kim a shoutout in an interview with the Daily Beast.

"To criticize us as incapable of being smart businesswomen because Kim has a reality show and I'm a socialite and we don't sing is stupid," she told the website. "We've both been in movies, and we take our acting, business ventures, and everything else very seriously."

And with this new Us Weekly soundbite, the induction is now complete.

So who might be the next link in the chain? Probably amateur witch Emily Ratajkowski, who appeared in a topless selfie with Kim Kardashian West on Wednesday. Everybody knows that topless selfies are a key ingredient in most standard anti-slut-shaming spells.