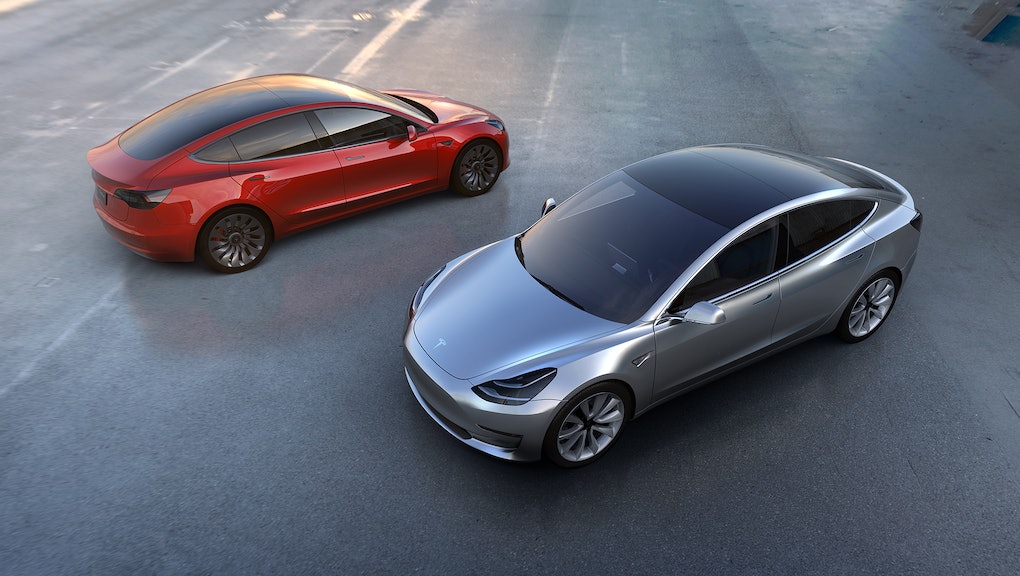 Tesla unveiled Thursday its latest car, the Model 3, to a crowd in Hawthorne, California.

CEO Elon Musk took the stage to introduce the latest and most affordable electric vehicle. Coming in at $35,000, the car costs significantly less than any of Tesla's previous models. Furthermore, Musk says the car will compete with the Audi A4 and BMW 3 Series. Among electric cars, the Model 3 falls within the same price range as the Nissan Leaf and Chevy Bolt.

The Model 3 looks like a squished Model S with both a smaller front and rear end of the car. While compact, the car will fit five people, and Musk confirmed it could fit a "7-foot surfboard" inside. More interestingly, the roof is made out of one continuous piece of glass. The car's interior will feature a 15-inch touch screen as opposed to the Model S, which has a 17-inch screen.

Internally, the car will do all the important things you want a Tesla to do. Musk says the base model version will be able to go from 0 to 60 miles per hour in under 6 seconds. It will also be able to travel 215 miles before it needs to recharge and can supercharge at any of Tesla's quick charging stations. For reference, there are 3,600 supercharging stations and 3,750 regular charging stations around the world, according to Musk. Finally, the Model 3 will come equipped with Tesla's much-talked about autopilot capability.

There are other affordable electric vehicles on the market including the previously mentioned Chevy Bolt and Nissan Leaf. But none offer the luxury features that Tesla does; this is how the carmaker stands to charm the market. So when will Tesla start delivering the Model 3?

"Next year," said Musk, laughing. "I do feel fairly confident that it will be next year."