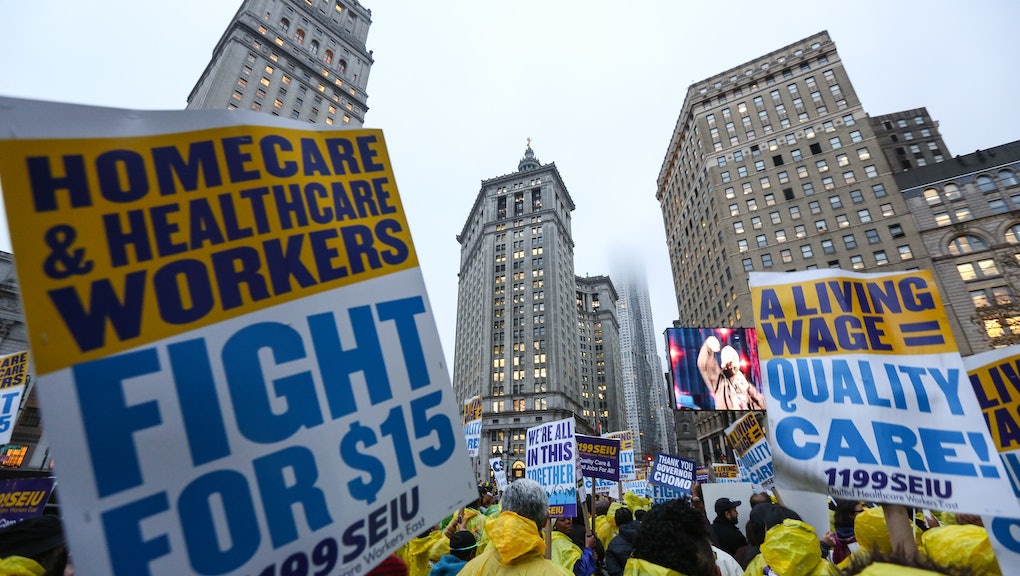 Just hours after the governor of California said that he would sign a statewide $15 minimum wage into law next week, lawmakers in New York struck their own deal on providing the same pay raise for many of the state's workers.

New York and California, which currently have $9 and $10 minimum wages, respectively, are now poised to become the first states in the nation to set a $15 an hour wage floor for nearly all workers.

The budget agreement reached between New York Gov. Andrew Cuomo and legislative leaders Thursday evening indicates that while New York City should have the full $15 minimum wage by the end of 2018, other areas such as Long Island and Westchester County won't hit $15 for close to six years, and still others could see it considerably later, according to the New York Times.

The New York budget deal also includes a policy that would give workers 12 weeks of paid leave for child care, to look after sick family members or to handle a military deployment in the family.

In some circumstances, smaller businesses will be given more time to adapt. In New York City, businesses with 10 or fewer employees will have close to four years to reach the $15 wage, according to the Times.

The agreement also has a built-in "safety valve" that could potentially derail the $15 minimum wage anytime in the near future in certain regions of the state. Starting in 2019, labor and budget analysts in the executive branch of New York's government will determine how the wage increase should continue in some areas of the state with lower costs of living.

In light of how unprecedented a high wage floor is for such a large population, it's not surprising that there are measures in place designed to hedge against the possibility of a surge in higher-wage-induced unemployment in parts of the state with a significantly lower cost of living. But it also seems that the path toward $15 in those areas will likely be subject to political vagaries that could have nothing to do with protecting the quality of the low-wage labor market. If political momentum for higher wages slows down in coming years and there's someone particularly conservative and vulnerable in the governor's mansion around 2020, who will the safety valve be used to protect?

In California, the new minimum wage law would allow the governor to slow down the wage increase in the case of economic or fiscal crisis, but it's currently set to increase to $15 statewide in six years automatically. By contrast, in some areas of New York the automatic annual schedule only takes the wage floor to $12.50 an hour before the government begins to take a more ad hoc approach to further increases.

Between California and New York, a population of roughly 60 million people live in communities that will generally be climbing toward a much higher minimum wage in the next half decade.

It's a good week for low-wage workers who have been tirelessly organizing and protesting under the banner of the "Fight for $15" movement for years.