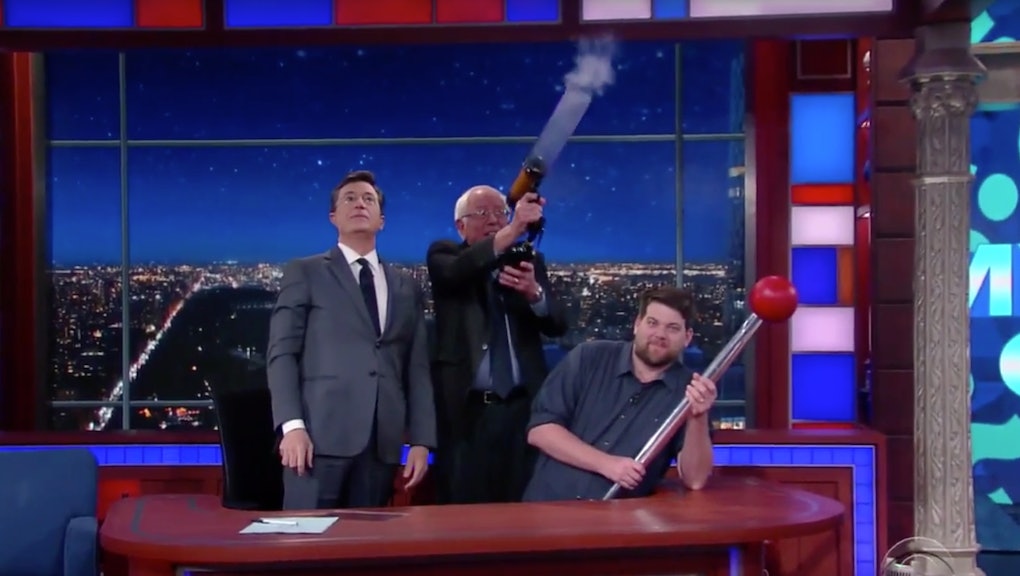 Bernie Sanders Surprised the Colbert Audience With a T-Shirt Cannon

On Thursday's Late Show, host Stephen Colbert turned to his "Wheel of News" — situated on the dome of the Ed Sullivan theater to guide his coverage. The segment spun from Siberian unicorns, to Knicks fans to the true origins of the Bermuda Triangle.

When the wheel landed on "Mystery Guest," a wall lifted to reveal none other than one Bernie Sanders. Cue thunderous applause.

Read more: Sanders and Colbert Teamed Up for an Awesome Episode of 'The Late Show'

After the hysteria died down, Colbert began the interview on a serious note asking Sanders — visiting his native New York City in advance of the the April 5 primary — about his plan for snatching up superdelegates currently pledged to frontrunner Hillary Clinton.

"Why do you want the Democratic party to be thrown into the kind of chaos you see on the Republican side, where they will have a contested convention?" Colbert asked.

In places where he has won by large margins, said the Vermont senator, those superdelegates would ultimately support him. "I think that superdelegates should listen to the will of their people."

Things (or course) didn't stay serious for long. As Colbert tried to "end" their interview, Sanders shouted that he wanted to "spin that damn wheel."

Hopefully for Bernie's sake, at least one superdelegate audience member snagged a T-shirt.