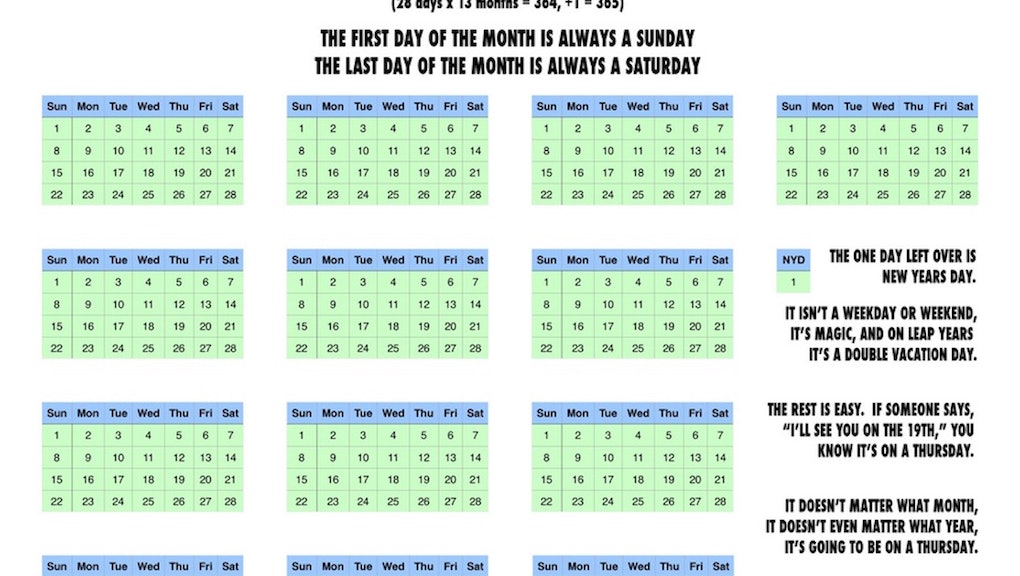 A proposed 13-month calendar posted Tuesday to Reddit has become the latest catnip for people on the internet.

On Imgur alone, it has been viewed more than a million times and has nearly 5,700 net upvotes on Reddit.

Read more: Why Is February 29, 2016 a Leap Year? Here's the Reason for the Extra Day on the Calendar

A 13-month calendar is not a new idea. It is simply a visual of the solar-based International Fixed calendar, or Cotsworth plan, proposed by British railway employee Moses B. Cotsworth in 1902. Every month would consist of exactly four weeks and each week would always start on a Sunday and end on a Saturday, meaning everyday would have the same date each month. For example, the 14th would always fall on a Saturday.

This would only account for 364 days, however, so Cotsworth added a "year day" between December and January, which would be its own magical day and wouldn't be assigned a day of the week.

We currently use the Gregorian calendar, a framework decreed by Pope Gregory XIII in 1582. This solar calendar is tied to the amount of time it takes for the earth to revolve around the sun, or 365.24 days (which is why we have a leap year).

The length of our months roughly corresponds with the amount of time it takes for the moon to revolve around the earth and a number of calendars — including Islamic and Jewish calendars — exclusively let the lunar cycle determine the measurement of time. However, it doesn't perfectly correspond with the earth's revolution around the sun, hence the approximation in our Gregorian calendar.

"There are those that theorize the number 13 may have been purposely denigrated by the founders of the patriarchal religions to eradicate the influence of the Mother Goddess," Today I Found Out explains. "In goddess worshipping cultures, the number 13 was often revered, as it represented the number of lunar and menstrual cycles that occur annually."

Cue the ladies drafting the petition. It's about time.