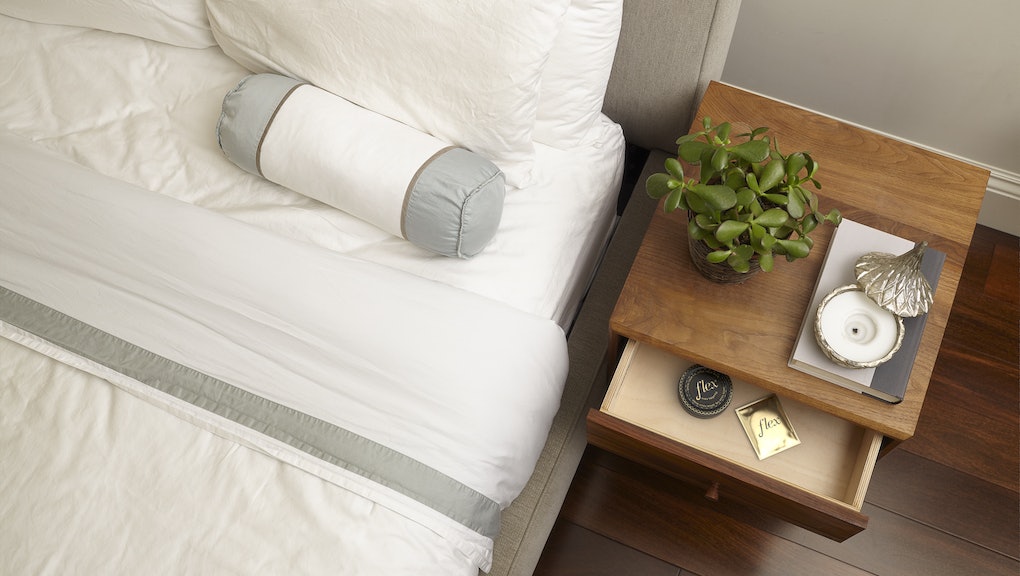 The past year has been pretty good for periods. Across the globe, we've made huge cultural strides toward accepting that menstruation is not a grotesque horror that warrants silence, shame and stigma, but rather a natural bodily function that just isn't that big a deal. It can, however, definitely get a little messy, particularly for ladies who are super into having period sex and don't want to get burgundy stains all over their linens.

Lucky for them, someone came up with a solution: Flex, a menstrual product that lets people have period sex without having to do an additional load of laundry.

Perhaps best described as a "disc-shaped blood blocker," to borrow phrasing from TechCrunch, Flex wasn't initially intended to make period sex less of a hassle, according to Erika Jensen, one of the company's co-founders. Instead, it was a response to "a personal problem" she and her co-founder, Flex CEO Lauren Schulte, both faced.

"We fucking hate tampons," Jensen said in an email. "We thought that the current products on the market were lacking — tampons and cups were invented in the 1930s — and developed Flex as a comfortable, more satisfying alternative."

Of course, it's also an alternative that allows users to create a veritable dam for their flow, preventing period blood from getting out while leaving room for something else (say, a penis) to enter the vagina.

Naturally, more than the promise of remaining "leak-free" for 12 hours or avoiding infections, that's what has gotten people interested.

"We knew that mess-free period sex was a benefit, but we built the company to empower women and never intended on using the messaging as the key value prop," Jensen said. "But we learned from early users that many couples avoid intimacy during a woman's cycle for a variety of reasons, and the response to the possibility of a product that could help them overcome some of these obstacles was staggering."

The product might be intended to increase the number of days each month couples can sex each other without feeling like they need to be hosed down afterward. But it's not the only thing that makes period sex worth having. Studies have shown period sex can help relieve menstrual cramps, in addition to satisfying the higher sex drive many people have when they're menstruating.

That said, it's worth noting that a product like Flex does little to eradicate persisting cultural norms that stigmatize period sex, period blood and periods in general. Sure, there's something to be said for avoiding bloody sheets — but if people really didn't think periods were gross, would they be quite so excited about a product that staunches the flow?

Even if Flex cuts down on mess, it arguably allows people who might still think menstruation is nasty to circumvent harmful taboos, which, in a way, reinforces them. However, as menstrual product options have only recently started expanding — and as access to things like tampons and pads remains distressingly limited throughout much of the world — the Flex team is focusing on helping menstruating people live more freely.

"Flex allowed couples who wouldn't have previously had period sex a new opportunity to talk about it and try it," Jensen said. "And for those of us who were already open to having period sex, Flex saves our white sheets, and we've retired THAT towel."