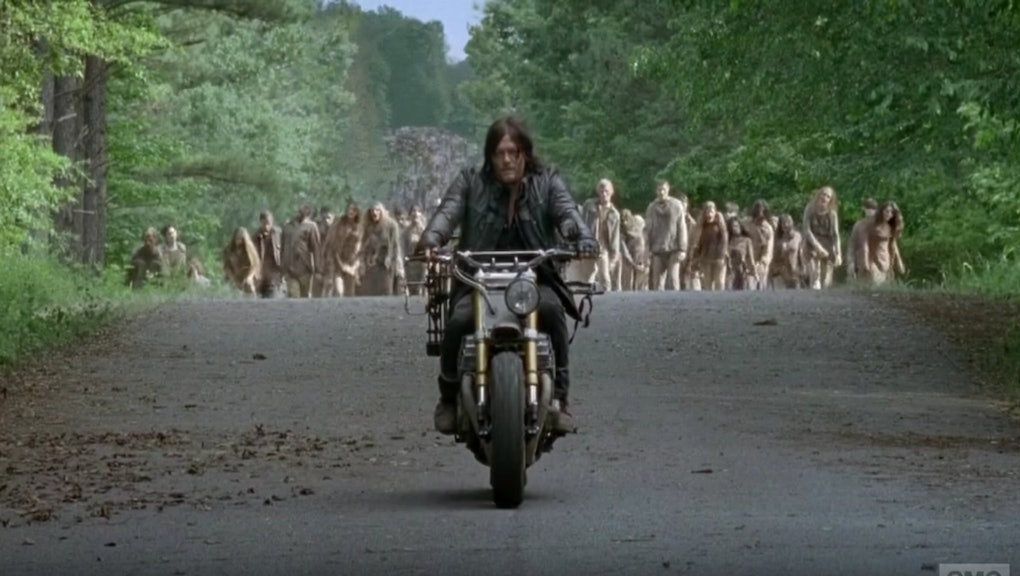 Is a Zombie Apocalypse Possible? Some People Suggest It's Not Just Science Fiction

Zombies are all over mainstream media — from TV shows like The Walking Dead to movies such as World War Z, we're obsessed with the idea of the undead. These concepts explore the primal urges of human nature, but they stay firmly in fiction, and shouldn't be the catalyst of anything besides unrealistic nightmares.

That said, the thought of a zombie apocalypse and its ramifications are still topics of conversation, and beg the question: Could it actually happen? Science suggests it's very unlikely, but there are minute examples of zombified creatures in nature.

Read more: Would You Survive a Zombie Apocalypse? It Probably Depends on Where You Live

While human beings don't have an inherent lust for brains (except Hannibal Lecter, of course), rabies do exhibit oddly disturbing traits for anybody infected with it from an animal bite. Namely, the symptoms include mental impairment, agitation, strange behavior and delirium. Couple these symptoms with the aggression of someone attacking another person, and it certainly has the implications of a zombie attack in the guise of 28 Days Later.

However, human-to-human rabies transmission is incredibly rare, and such an event wouldn't cause a widespread panic. Rather, while some of the traits of rabies are admittedly similar to the aggressive undead, it's still a stretch to suggest it could become anything close to apocalyptic.

On a very minor scale, parasitic fungus do attack creatures in nature, and essentially, turn them into zombified versions of themselves. Most notably, Ophiocordyceps is a fungus located in the jungles of Africa that infects the insects (ants especially), which allows it to stumble out of its colony and is guided by a pathogen that gets it to bite a portion of a leaf and die. If any other ants are in the vicinity where a giant fungi stalk grows on its head, they're in huge trouble when it bursts.

It's pretty creepy stuff, and there's a media counterpart to Ophiocordyceps that's received a lot of praise: The Last of Us. The video game doles out a similar fate to humankind, but again, that's in the realm of fantasy. In reality, however, the likes of ants in Africa are being turned into zombies — and it is admittedly very unsettling.

Neurotoxins have been used in chemical weapons — and that's dangerous, obviously — but it's possible they can also be used to great effect on an individual level. Moreover, depending on the proportions used, it can even stimulate the human body after death. At least, that's what supposedly happened in the most famous case of a real-life zombie, in Haitian man Clairvius Narcisse.

Narcisse was presumed dead and was buried, but was purportedly brought back to a zombified state and sent to work at a sugar plantation following his revival. While it's unclear if this was a valid point of argument — it's a theory set forth by anthropologist Wade Davis in the 1980s, and has since been refuted by other experts — the Haitian zombie lore remains popular.

Really, this stems from the infamous 2012 case in Miami where one man high on bath salts attacked a homeless man and viciously gnawed off his face in the process. The initial reaction was a stir of paranoia — like a scene from The Walking Dead in the middle of a metropolitan city.

However, it's hard to pinpoint why it happened, whether it was the bath salts themselves or the man's mental state, but it's never been fully determined as he was fatally shot on-site by police. In any case, it's probably best you avoid inhaling bath salts, on the off chance you have a sudden desire for human flesh.

Yet, as a responsive measure to the media craze, the Centers for Disease Control and Prevention made it clear it does not "know of a virus or condition that would reanimate the dead (or one that would present zombie-like symptoms)," CDC spokesman David Daigle wrote in a 2014 email to the Huffington Post.

A cat poop parasite (no, really):

Bad news for cat owners out there (and there's certainly a lot of them): Your cat is plotting to control your mind. OK, that's definitely an exaggeration, but a food-borne parasite does make its way to cat feces, and can make its way into humans, as well — with unsettling results.

The parasite, Toxoplasma gondii, actually begins its journey in rodents. The parasite can control the behavior of rodents so that they lose their inherent fear for the smell of cat urine. This is a big deal, considering this allows cats easy access to a meal — and no rodent in their right mind would want to approach the scent. Thus, the infection begins after a cat eats the rodent. It can then be transposed to humans if we accidentally ingest the eggs of the virus that are shed into the cat's feces — easy enough when we're always scooping poops.

Some studies have suggested that being infected with T. Gondii can have serious affects on a human being's mental wellbeing. Czech biologist Jaroslav Flegr believes it's the cause of many mental disabilities, including schizophrenia, though his studies on the parasite have not yet achieved widespread scientific acceptance.

Obviously, even the worst-case effects of T. Gondii would be a stretch to suggest human beings are going to transition to a zombie-like state. In any case, the CDC was quick to point out that many of us are already infected with the parasite — yet, we should be fine.

"More than 60 million men, women, and children in the U.S. carry the Toxoplasma parasite, but very few have symptoms because the immune system usually keeps the parasite from causing illness," the CDC says on its website.

A hypothetical viral apocalypse would spread quickly, no matter where you live:

Let's say you are patient zero of a viral outbreak (congrats!). Depending on where you live, how quickly will it spread? As it turns out, very, very quickly.

An online simulator, Collapse, allows a user to get a play-by-play rundown of how an infection would spread after you put down a location. Now, the game says it's all within scientific reason, but it was also a promotional effort for the upcoming dystopian survival video game, The Division (in the game, the virus is related to a smallpox outbreak, but you can swap it out with a zombie virus and get the same effect).

So, take it all with a grain of salt, but it's still fascinating to see how your decision-making affects how quickly a virus would spread. If you take the farthest possible route to the hospital or supermarket, chances are the world will be infected at a much faster pace. Ultimately, once airlines have infected passengers, it won't take long for the world to go dark.

Pop culture has always been fascinated with zombie outbreaks in a similar light, most recently in AMC's spinoff show Fear The Walking Dead. Unlike the flagship series, the show starts at the onset of the zombie apocalypse in Los Angeles. While it doesn't have a specific set of days to demonstrate the spread of the infection, there's a commonality in all zombie-centric storylines in the media: people will get infected swiftly.

The government's prepared, just in case:

As unlikely as a zombie apocalypse is, however, the government's got our back. In 2011, the CDC released a "Preparedness 101: Zombie Apocalypse" guide. While it is pointedly making fun of our paranoia for zombie outbreaks, it guidelines actual emergency preparedness steps in the event of an actual emergency situation (ie. a natural disaster, like a hurricane).

"There are all kinds of emergencies out there that we can prepare for," the post reads. "Take a zombie apocalypse for example. That's right, I said z-o-m-b-i-e a-p-o-c-a-l-y-p-s-e. You may laugh now, but when it happens you'll be happy you read this, and hey, maybe you'll even learn a thing or two about how to prepare for a real emergency."

Obviously, it was a clever vehicle for the spread of important information — reading the article in full, you'll have the knowledge necessary for a plethora of circumstances. More importantly, it was a huge viral hit for the CDC.

"We have a great message here about preparedness, and I don't have to tell you that preparedness and public health are not the sexiest topics," CDC's preparedness department's head of communications, Dave Daigle said, in an interview with the Atlantic. "We posted it on Monday. By Wednesday, the server crashed."