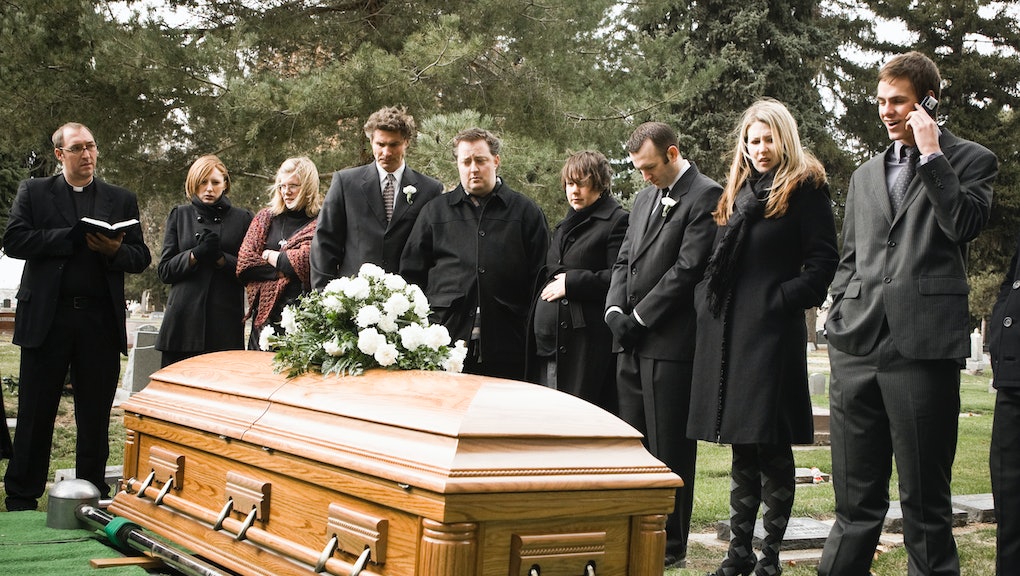 Traditional Burial Is Polluting the Planet. So Where Will We All Go When We Die?

Half a billion people are going to die in the next decade — and we can't keep cramming their caskets into the Earth.

Every year, tens of millions of the 7.4 billion people on Earth will die. Some will be cremated, and millions will be buried in the ground, accompanied by pounds of steel, wood and toxic embalming fluid. As the population on Earth grows, so too does the one right below its surface — rendering the ground useless for new growth.

The question is this: Are traditional burials selfish? I mean, shit, probably.

"Americans are funny about feeling like they own a 4-by-8 plot for eternity," Kate Kalanick, executive director of Green Burial Council, said in a phone interview Wednesday. "In an environmental sense, traditional burial is selfish for the impact it has. I don't think people really think about how their death affects the land or our world."

Let's break down the numbers. Traditional caskets are hundreds of pounds of wood, metal and whatever cushioning goes inside. Ronald Reagan's casket — a big mahogany tank of a box — allegedly weighed 400 pounds. Burial vaults, the enclosures that barricade each casket from the elements, can be around 3,000 pounds of cement, sometimes steel. For embalming, it seems the golden rule is one gallon of fluid per 50 pounds of body. Add it all up and you've got around two tons of material per body — plus a few gallons of an occasionally hallucinogenic embalming juice — chilling in the earth forever.

"Traditional burial is selfish for the impact it has. I don't think people really think about how their death affects the land or our world." — Kate Kalanick

Now zoom out. For all of the 7.4 billion people breathing on the planet right now, there are around 15 dead and buried beneath them.  The Population Reference Bureau estimated 107 billion people have, ever, roamed the planet, Live Science reported. We don't know exactly how many of those dead people had traditional burials. But even if 10% of them were buried in a cement-tombed, mahogany casket, that's still a colossal amount of shellacked, nonbiodegradable, poisonous crap going in the ground every year.

Here's the deal: Every body decomposes eventually; all the casket, cement enclosure and formaldehyde do is slow down the process. But sooner or later, the whole body — even the gallons of toxic, carcinogenic embalming fluid — end up in the water table of whatever place they're buried.

Despite the downsides of burial, not everyone wants to be cremated. Plus, there's plenty of evidence suggesting the energy it takes to burn a body down wreaks significant damage on the environment.

If we're going to put bodies in the ground, we need smart ways to do it. That's where organizations like Kalanick's Green Burial Council come in.

The burial of the future: The idea of a green burial is to make as little an impact on the natural environment of the burial site as possible.

Green burial grounds look a lot like the land did before it got filled up with bodies. The headstones are often rocks or trees indigenous to the landscape. There's no cement vault. The casket is biodegradable and the embalming fluid is plant-based.

"If you look out across the site, it would look like a field or a wooded area," Kalanick said. "It all depends on the natural landscape. But they aren't maintaining the grass with chemicals."

There's even a green way to get cremated. Jose Vazquez is an architect and designer who created the Spíritree, an urn that takes the ashes of someone and turns them into a seeding ground for a new tree.

The problem with traditional cemeteries is you can't do anything else with the land once bodies are under the ground, Vazquez said over the phone.

"The idea of my product is this continuation through nature," he said. "You become a memory through a tree. The whole forest could be the collective memory of loved ones."

"You become a memory through a tree. The whole forest could be the collective memory of loved ones." — Jose Vazquez

A whole forest of grandparents sounds like the beginning of a horror movie. But at least it's a horror movie that provides oxygen to people walking through the woods. And it's less scary than all of those "dead" cemeteries that are a few hundred years old, turning into eyesores in middle-of-nowhere, Nevada.

Funeral trends are changing. Thanks to a recent shift in the funeral industry, new cemeteries won't be taking up more and more of the Earth's surface.

At least that's according to Julie Found, funeral director of Found and Sons Funeral Home in Fredericksburg, Virginia. She said cremation is more common than it once was, cutting down on the amount of space your body occupies after death.

"I think traditional burials — the embalming, the casket, visitation — are, for lack of a better word, dying," Found said in a phone interview March 29. "It's a weird time in the funeral industry. The public ... doesn't see the reasoning in paying $10- to $15,000 to bury a person in a cemetery."

The environmental impact is starting to make a difference too, Found said — especially when the younger generation takes over their families' funeral homes.

"The older generation, the people burying their parents right now, still don't feel that impact," Found said. "But my generation is concerned with the environment."

"The older generation, the people burying their parents right now, still don't feel that impact," Julie Found said. "But my generation is concerned with the environment."

Here's a weird proposition: Young folks need to get less precious about how we treat our dead. Yes, loved ones need to be memorialized. But who's to say thousands of pounds of metal and wood is still the best way to do it?

Maybe now it's about letting their bodies become part of the land. Or turning them into trees. Because while a haunted forest grown out of your mom's side of the family sounds frightening, it's a hell of a lot less scary than a corpse- and chemical-addled Earth where nothing new can grow.