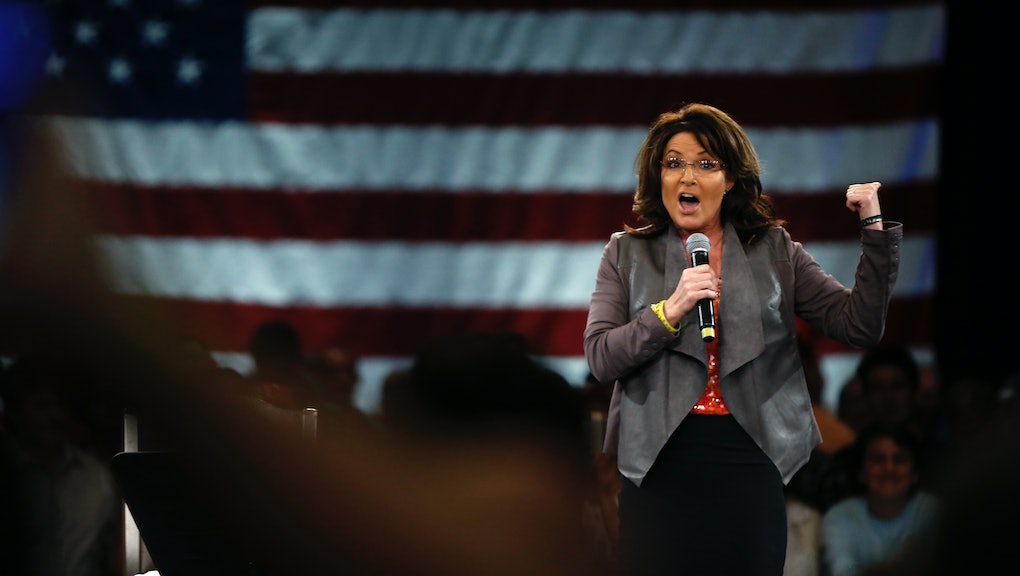 If there's one person who hasn't run for president but has still had an awful lot to say this election cycle, it's Sarah Palin. She's delivered a bizarre Trump endorsement speech and pointed out the "punk-ass little thuggery" of Trump protesters, and now she's brought her famous "right-wingin', bitter-clingin'" sing-song rhetoric to the ongoing conversation on immigration.

While speaking to a crowd in Wisconsin ahead of Tuesday's Republican primary, Palin insinuated — well, it's not really clear. But whatever she was implying, it included politicians offering "welcome baskets" to incoming immigrants, many of them undocumented.

Then, Palin suggested candidates — though she didn't say who — were "inducing" and "seducing" immigrants with gift baskets. "Come on over the border and here's a gift basket of teddy bears and soccer balls," she said mockingly.

The worst part? In an eight-minute speech, Palin received nearly zero claps. And her speak of soccer balls and and teddy bears urged more people to check their phones than give standing ovations.

Palin's latest comments are just a drop in the bucket of Republican anti-immigration rhetoric — the highest-profile remark of 2016 coming from Trump in the form of comments equating Mexicans with drug users, rapists and general criminality.

Immigration reform became personal during a debate earlier in the election, when Sen. Marco Rubio, whose parents are Cuban immigrants, and Sen. Ted Cruz, who was born in Canada to Cuban immigrants, got into a verbal spar over immigration, resulting in Cruz snapping at Rubio with some of his best Spanish.

But honestly, there's only one Spanish phrase to sum up all this talk on immigration.

No, not that one. This one: