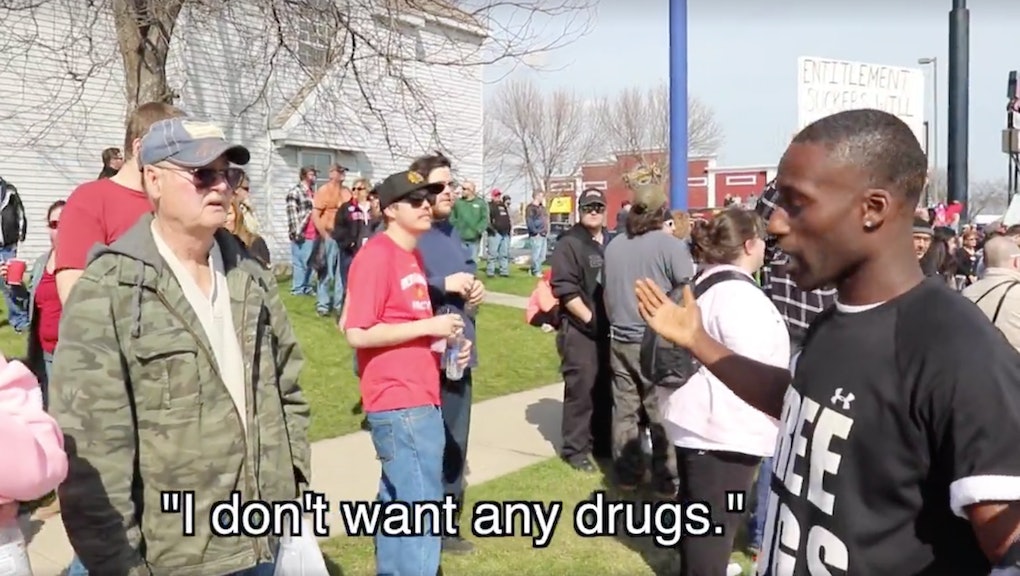 A friendly embrace will put a smile on your face. At least, that's what the Free Hugs Project hopes.

Unfortunately, the Project, which began at the Boston Marathon one year after the 2013 bombing, was not able to garner much reciprocation for their hugs at a Donald Trump rally earlier in March. Quite the contrary, when Ken Nwadike, the man behind the project, approached people in the crowd, he was actually met with hostility and anger.

In a video posted to the Free Hugs Project Facebook page, you can see Nwadike at the same Janesville, Wisconsin, Donald Trump rally where a young woman was pepper-sprayed on March 30.

When he approached two young men to talk about hate, they both responded, "There is hate but there's bigger problems." While hugging a white woman, she yelled out "White is better!"

No one seemed especially receptive to Nwadike. One man told him, "I don't want any drugs," when Nwadike approached him for a hug. One woman threatened to punch him in the face if he did not vote for Trump.

If you're not feeling the love, there could be a reason — according to one rally-goer, there is no love in the world.

In the video, Nwadike never receives a full-on hug from a Trump supporter, though he does get a handshake from a police officer working the crowd.

At the Sanders rally, it was an entirely different scene: The video opens with Sanders supporters cheering "We want hugs!"

As of press time, Nwadike's video has over 300,000 shares and over 16,000 comments, most of which are from people who are overwhelmed by the amount of love in the video and stunned by the contrast between the two rallies.

To spread their message, the Free Hugs Project has created the hashtag #MakeAmericaLOVEAgain, which began trending on Facebook this week.

One thing is for sure: Whether you #FeeltheBern, you're on the #TrumpTrain or you're saying #ImWithHer, we can all support love as a platform. Right?