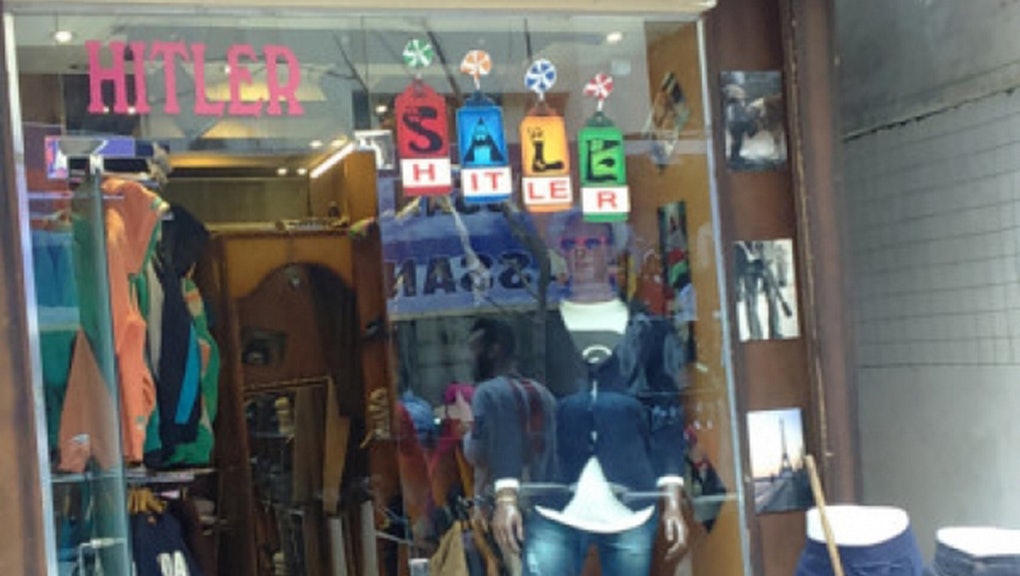 The owner of a clothing store in Cairo, Osama Farouq, is drawing criticism after deciding to name his place of business "Hitler," Gulf News reported last month.

Yes, that Adolf Hitler — and to purposefully drive the point home, the store's sign comes complete with a swastika.

Farouq, whose store is located on the fashionable Shawarbi Street, told Gulf News he did not intend to offend anyone and "the name and the emblem drew my admiration so I decided to put them up on the front of my store ... The matter does not deserve all this fuss. It's just a name. Why are people so angry? I have nothing to do with politics."

"Praise be to God, I have my own clients who come to the store because of the fine quality of my goods," he added. "I am not a communist or a person with a stony heart. I'm a Muslim who believes in one God."

It's beyond easy to see why the choice of name is turning some heads.

Worldwide, an estimated 45 million civilians died during World War II, as well as 15 million additional soldiers who died in battle. Hitler's regime murdered as many as six million Jews, some 5.7 million Soviet civilians, three million Soviet prisoners of war, 1.8 million non-Jewish Poles and hundreds of thousands of others, according to the United States Holocaust Museum.

As Ynetnews notes, other places Hitler-themed stores have opened up include western India and the Gaza Strip. In 2013, Haaretz reported on another store named "Hitler" in Cairo, though that store appeared to be unconnected to the one on Shawarbi Street.

The Indian location, however, had its sign removed by municipal officials in 2012.

Other dubious Hitler-themed products include Lunardelli Wine, which offered 30 Nazi-themed vintages as of 2013, whose creators told the New York Times is intended to depict "history, not propaganda."