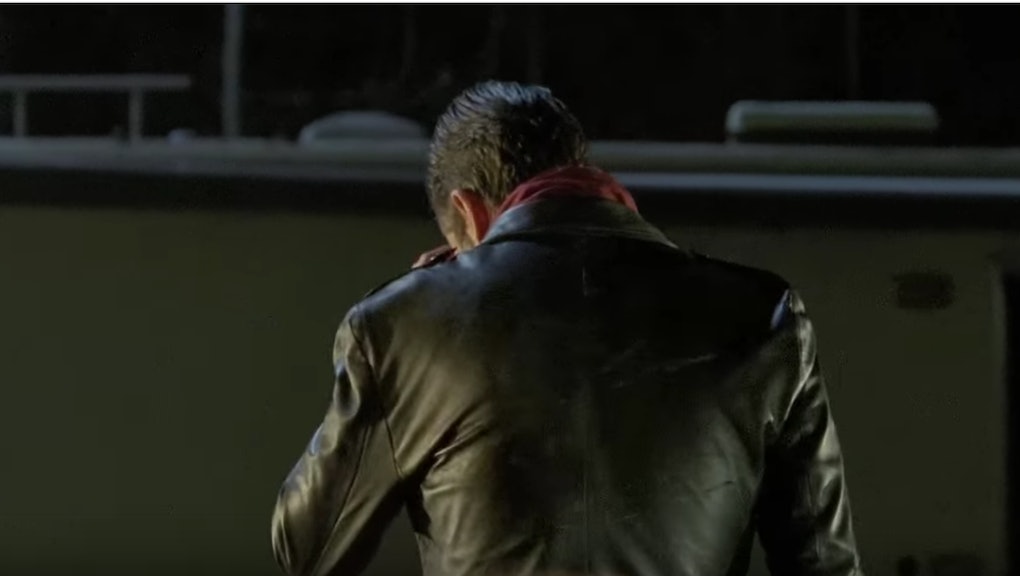 It has been a slow build — as slow as some of the zombies on the show, even — to the introduction of Negan (Jeffrey Dean Morgan) on The Walking Dead. The anticipation has been hyped for the better part of the sixth season, initially with members of Rick's (Andrew Lincoln) group running into his lackeys on the side of the road in the midseason finale's prologue. For comic book readers, who had been wondering when the series' most notorious villain would show up, it's been an even longer wait — previous, subtle on-screen hints aside.

Fans needn't wait any longer to see Negan, as the leader of The Saviors made his first appearance in the show's season six finale, "Last Day on Earth." And just like his comic book entrance, he comes in, quite literally, swinging.

(Editor's note: Spoilers for "Last Day on Earth" and the comic books ahead.)

Sporting a black leather biker jacket and his beloved Lucille — a barbed wire-coated baseball bat — Negan appears out of the crowd of Saviors that have ambushed Rick's group on the road as they attempted to take Maggie (Lauren Cohen) to the Hilltop Colony following problems with her pregnancy.

While Negan wants them to work for him, similar to the Hilltop, he's upset with the group, and understandably so: They've killed several members of his crew, some by ambushing an outpost, others with a rocket launcher. For that, they've got to pay a price — they need something to fear.

Laying out several members of the group in front of him, Negan has trouble deciding who should be doled the punishment. Chillingly, he decides on a game of eeny, meeny, miny, moe to claim his victim. Without remorse or hesitation, Negan repeatedly clubs someone with Lucille as blood spatters the screen. However, that's the problem: We don't know who's at the end of his bat. In the process, The Walking Dead has created one of the most frustrating cliffhangers in recent television history.

Naturally, fans on Twitter were upset with the cliffhanger end to the season, and really, they should be.

It's evident Rick and the group won't take this heinous act — no matter who's on the receiving end — sitting down. They have members of the Hilltop Colony on their side, and chances are any other crews they might encounter under the rule of The Saviors would happily oblige in revolting against Negan.

With the narrative arc The Walking Dead is presenting for the show's seventh season in the fall, it appears the group will stay entrenched in Alexandria for an extended period of time. However, that could end up being a positive. After countless attempts to find a home before inevitable chaos ensued — namely Hershel (Scott Wilson)'s farm, the prison and Terminus — settling might just be the changeup the show needs to stay compelling.

We have our first main villain since The Governor (David Morrissey), and other communities will have an active role in the series. Zombies, for the time being, are merely a backdrop. Yet because of this, The Walking Dead is back to its strongest conflict: fighting humankind. And Negan will be the toughest assignment to date. Now the only thing holding the series back is the showrunners' propensity for unnecessary cliffhangers.