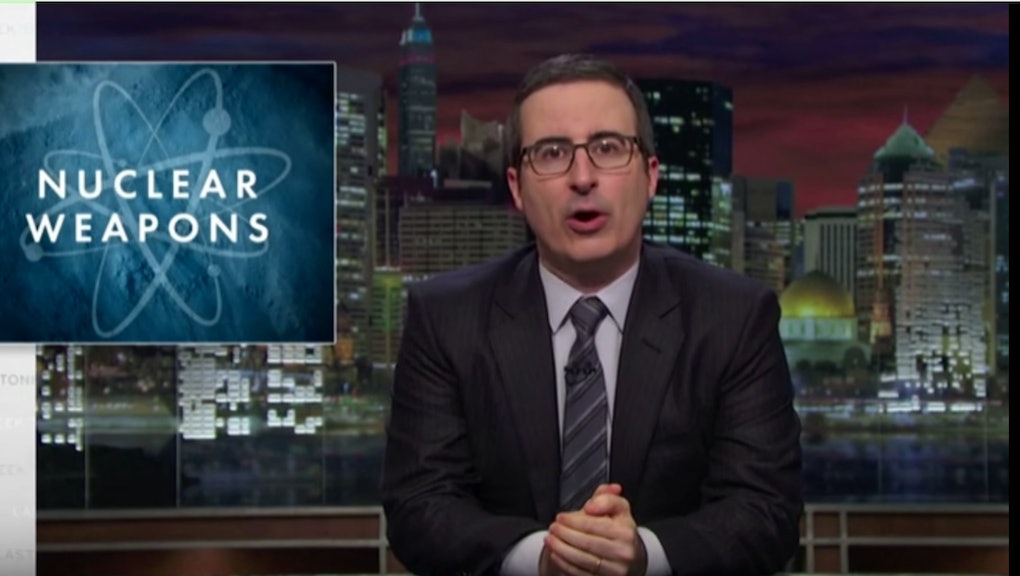 While many in the media were focused on Donald Trump's latest verbal tirade gone wrong (i.e. his horrifying remarks about abortion), John Oliver drew another concern on Sunday's episode of Last Week Tonight. Oliver underscored Trump's knowledge — or lack thereof — regarding foreign and nuclear weapons policy as not just ridiculous, but seemingly dangerous.

Oliver began the segment with commentary on Russian President Vladimir Putin's absence from the Nuclear Security Summit, then turned to Trump's recent comments on other countries having nuclear weapons. Trump has suggested that U.S.-friendly countries should arm themselves with nuclear weapons, first naming Japan and South Korea before awkwardly pivoting to Saudi Arabia.

"He says that with the confidence of a man who could easily find Saudi Arabia on the map, if he was given three tries and the map only included countries ending with 'Arabia,'" Oliver said.

Furthermore, Trump's apparent encouragement of nuclear proliferation at last week's Republican Town Hall drew a response from President Barack Obama, who said it's evidence the real estate mogul "doesn't know much about foreign policy, or nuclear policy, or the Korean Peninsula, or the world generally." Oliver, for his part, agreed wholeheartedly.

"President Obama is basically implying there that you could fill a book with the things Donald Trump doesn't know," Oliver said. "That book being the encyclopedia."

Check out the clip from Last Week Tonight below.