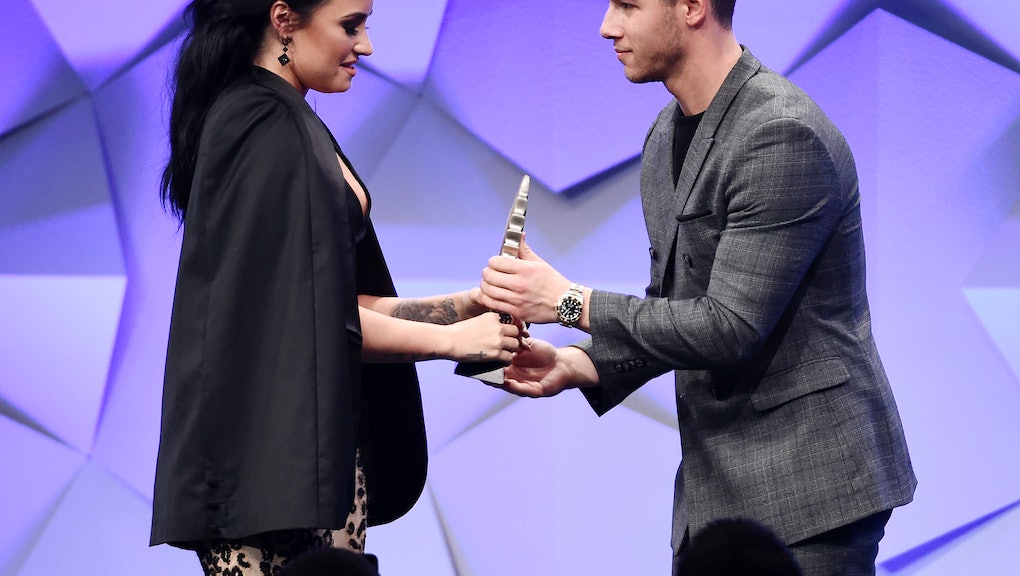 Much like roses growing through concrete, bromances sometimes bloom in unlikely places.

Which brings us to this past weekend, when pop singers Demi Lovato and Nick Jonas went from having an ordinary friendship to a level-five bromance by making the ultimate in bromantic gestures: she cracked a wiener joke.

"I know that you all love Nick Jonas," she told the crowd onstage at the 2016 GLAAD Media Awards, after Jonas presented Lovato with the Vanguard Award. "But I actually have a bigger dick than he does. And a huge set of balls."

In some contexts, suggesting that a dude has a tiny ding-a-ling could be construed as an act of intimidation and humiliation. But when such a comment is made in the context of a blossoming bromance, then it's just good-natured ribbing. Hence the enthusiastic reaction seen from Nick above.

The bromance between Lovato and Jonas has actually been years in the making. The two former Disney Channel stars, who starred in the 2008 Disney movie Camp Rock together, have been BFFs for almost a decade.

They've started a record label together:

They've even taken cigar selfies together (because nothing is more bromantic than two bros taking a cigar selfie):

Both Lovato and Jonas have talked openly about their bromance in the past, with Lovato referring to Jonas as "basically my twin brother" in an interview with Complex. Jonas similarly gushed about Lovato to MTV News, saying of their 2014 duet, "Avalanche": "It's not necessarily a love song. It's so easy to do a duet that's a love song because our relationship isn't really that. But there is love there for a friend, you know, and it's beautiful to just talk about."