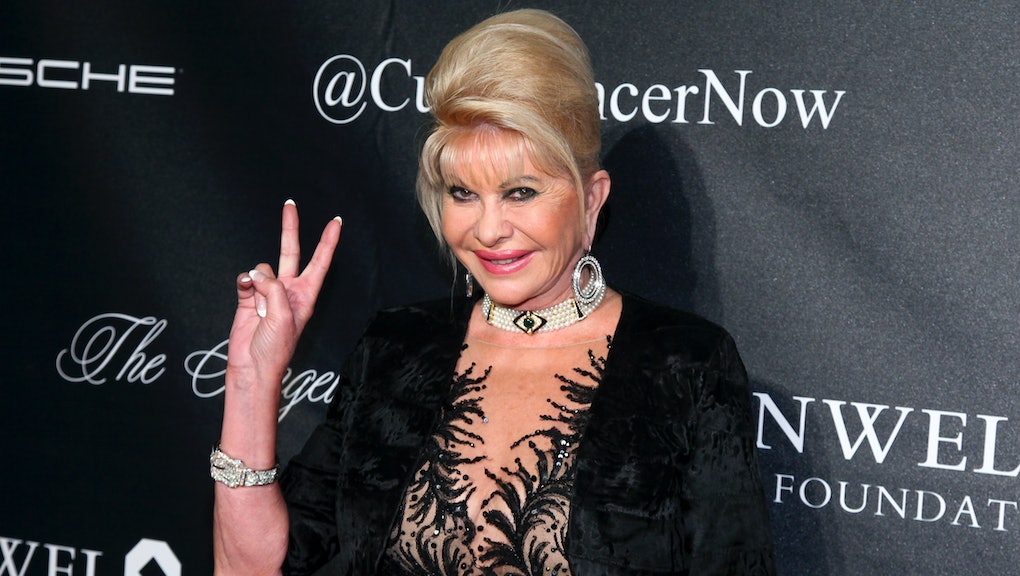 In an interview published in the New York Post this past weekend, Ivana Trump came out squarely in ex-husband Donald Trump's camp on immigration.

Trump, who was succeeded in marriage to her ex-husband by models Marla Maples and Melania Knauss, said the United States has lost its national luster and needs to "get it back" by enacting his immigration policies.

"And I'm an immigrant. I have nothing against Mexicans, but if they [come] here — like this 19-year-old, she's pregnant, she crossed over a wall that's this high," said the Czech-born Trump, gesturing to the floor.

"She gives the birth in American hospital, which is for free," she continued. "The child becomes American automatically. She brings the whole family, she doesn't pay the taxes, she doesn't have a job, she gets the housing, she gets the food stamps. Who's paying? You and me."

But she's not totally anti-immigrant as was noted in what can only be considered the coup d'état of the interview:

"As long as you come here legally and get a proper job ... we need immigrants," she said. "Who's going to vacuum our living rooms and clean up after us? Americans don't like to do that."

Elsewhere in the interview, Trump found the time to mirror her ex-husband's recent flip-flop on whether women who have abortions should be punished by muddling her response to a question on feminism — though whether it was an intentional flip-flop is anyone's guess.

"I don't think he's feminist. He loves women. But not a feminist," she said. Point taken.

Finally, Trump paid tribute to her ex's virility, and not out of nowhere. Failed presidential contender Florida Sen. Marco Rubio made the size of Trump's "hands" a losing point of contention earlier this year.

"If there was a problem there, Donald would not have five kids," she said.