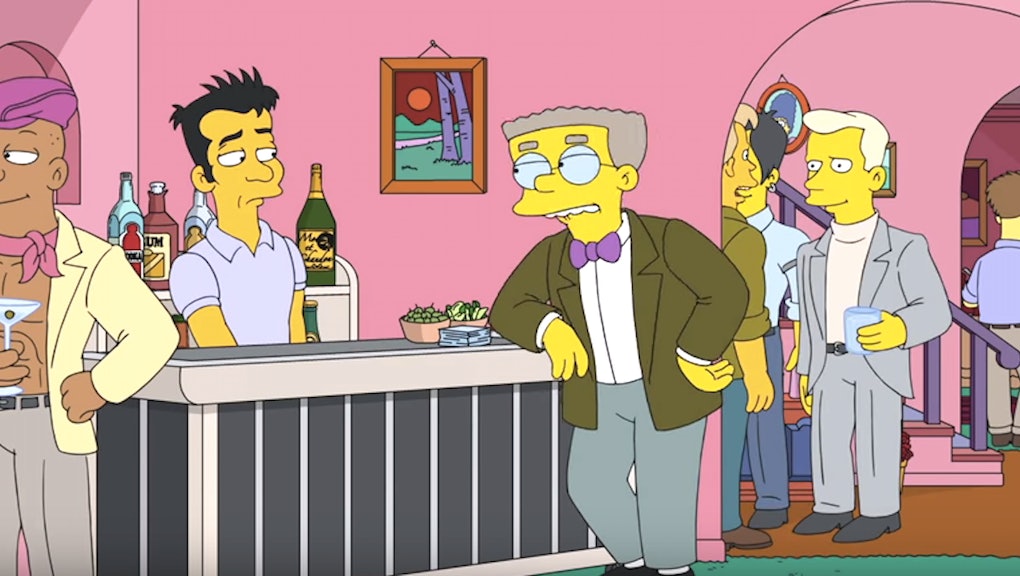 Smithers Comes Out as Gay on 'The Simpsons,' Surprises No One

One of the longest-running plotlines on The Simpsons took a major step forward Sunday when Waylon Smithers, personal assistant to the evil billionaire Mr. Burns, finally came out to the people of Springfield. Smithers' sexuality (and his unrequited love for his elderly boss) has long been an open secret in the fictional world of The Simpsons, but in 27 seasons, Smithers has never explicitly discussed being gay with other characters — until Sunday night's episode.

Read: This Calvin Klein Ad Is Being Labeled as "Gay Propaganda" by Some Russians

The plot of Smithers' coming-out episode, titled "The Burns Cage," kicks off with Smithers finally proclaiming his love for Mr. Burns, who responds by casually brushing him off. Realizing that Smithers is brokenhearted over Mr. Burns, Homer decides to do everything he can to find him a boyfriend.

What follows is a classic Simpsons storyline: Smithers does find a relationship but things fail when he realizes he's still not over Mr. Burns — so the two patch things up (sort of) over a dinner and everything mostly return to normal. Basically there's some character growth, and now everyone knows Smithers is gay, but at the end of the day not much has changed in Springfield.

The episode does put an end to the long-running jokes about Smithers being closeted. And there was some awesome real-life inspiration behind the storyline too: Simpsons writer Rob LaZebnik told the New York Post that he was inspired to write the coming-out episode after his son Johnny, now 21, came out to him as a teenager.

"I thought, 'What better way to tell my son I love him than to write a cartoon about it?'" LaZebnik told the Post. LaZebnik wanted to have the other characters treat Smithers' sexuality not as a shocking revelation but as a fact that mostly everyone was already aware of. "We didn't really want to have that big moment of 'I'm out,' you know? ... Instead, just have it be a big embrace — like everyone knows it," LaZebnik said.