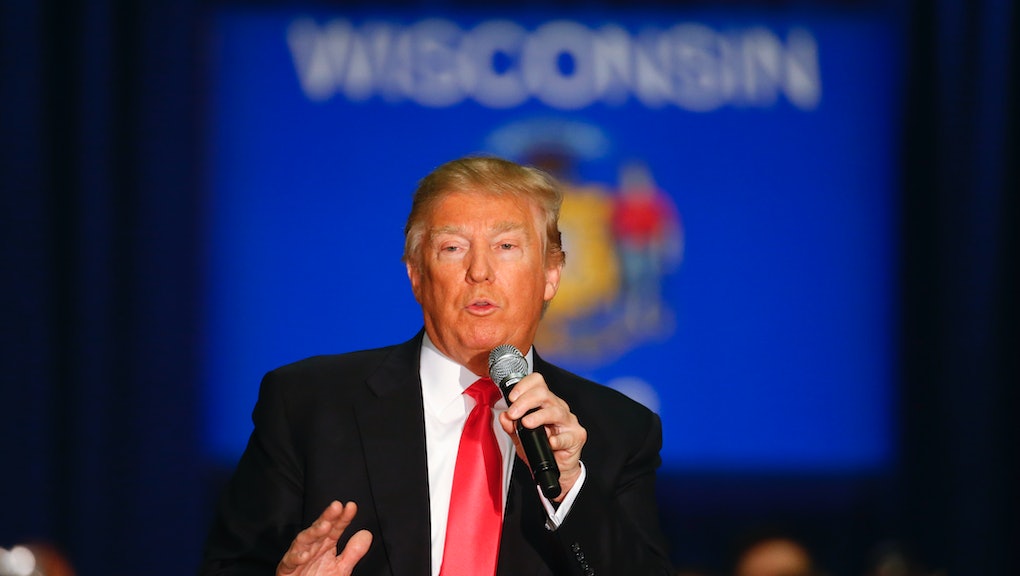 Wisconsin GOP Primary 2016: What to Expect in the Race Between Donald Trump and Ted Cruz

Will the Badger State help derail the Trump Train?

Businessman Donald Trump may boast a substantial lead in the Republican delegate race, but the path to denying Trump the party's presidential nomination runs straight through Wisconsin.

The latest polls show Sen. Ted Cruz of Texas may well sweep the state's 42 delegates in Tuesday's primary — a result that would deal a significant setback to Trump's hopes of winning the 1,237 delegates required to secure the GOP nod outright ahead of the Republican National Convention in July.

Read more: One Number Shows Why Donald Trump Is Making a Very Risky Gamble in Wisconsin

The lay of the land: Boasting the endorsement of Gov. Scott Walker — whose own presidential bid fizzled last year — and benefiting from a torrent of spending by outside groups, Cruz enters the primary with the wind at his back.

He has led in eight of the last 10 polls conducted in the state, and enjoys a 39% to 35% lead over Trump in the RealClearPolitics polling average. Ohio Gov. John Kasich trails with 20% support.

Though many are interpreting Cruz's lead as a sign that Trump has been badly damaged by recent controversies surrounding the misdemeanor battery charge facing his campaign manager and his quickly retracted call for "punishment" of women who obtain illegal abortions, the billionaire hasn't actually seen his support in Wisconsin collapse. Prior to March, Trump never polled above 30% support in the state, and his highest numbers yet — 37% support, in polls from CBS News/YouGov and Public Policy Polling — have come in the past week.

But while Trump may be growing his support in the state, he hasn't done so quickly enough to avoid being eclipsed by a surging Cruz. With much of Wisconsin's conservative establishment coalescing behind him, the senator hopes to score a smashing victory in the primary, boosting the prospects of denying Trump the nomination.

The statewide winner of Wisconsin automatically wins 18 delegates, with the other 24 doled out by congressional district. (Each of Wisconsin's eight districts awards three delegates.) Should Cruz win the state by a large margin, his odds of winning all 42 delegates will be much better.

But Trump hopes to benefit from Wisconsin's open primary system, which will allow non-Republicans to vote in the GOP primary. Riding a wave of support from disaffected and anti-establishment voters, Trump has excelled in open contests.

So what if Wisconsin bucks that trend? Trump will then need to win about 60% of the remaining delegates to win the nomination outright — a tough if not impossible task, given that most future contests will award their delegates proportionally.