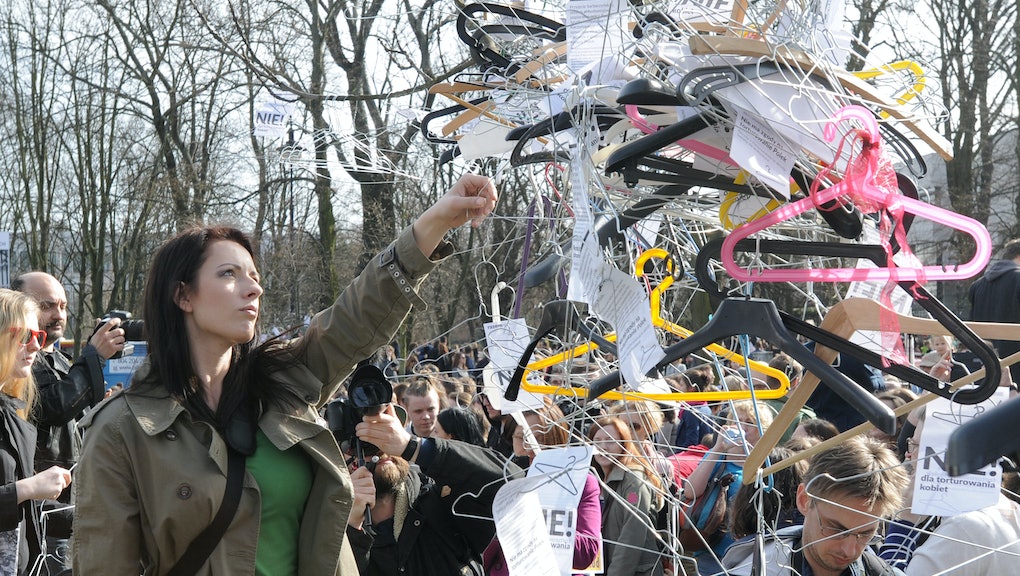 This week, clergy members across Poland called for even tighter restrictions to the country's existing legislation on abortion, amounting to a total ban.

Currently, under Polish law, women are only allowed to terminate a pregnancy in the case of a threat to the woman's health or the embryo's health, or when it is the result of an "illegal act."

A video posted to Facebook shows churchgoers staging a walkout while a priest reads a letter supporting the proposed ban at Sunday mass. According to the Guardian, the right-leaning Law and Justice Party proposed the law in order to align with the Catholic church's teachings.

Read more: Trump Endorses "Punishment" for Women Who Get Abortions — Then Flip-Flops

But the walkout was only the beginning of the backlash.

On Sunday, thousands participated in demonstrations across Warsaw and other Polish cities, uniting under the phrase "No to the torture of women." Protesters chanted "keep your hands off the uterus" and "my body, my business" and wielded wire hangers, a reminder that abortion restrictions force many women to seek dangerous alternative methods of pregnancy termination.

The strong ties between church and state driving the new legislation have been fueling Poland's social agenda for decades. "The church is now cooperating more with the state and not with society,"  University of Warsaw sociologist Michal Luczewski told the Huffington Post in 2013. "Poland is the only case where we overturned a very liberal abortion law that made abortion legal for everyone who used it," he added later in the interview.

"Even Iran's abortion laws are more liberal than this proposal," protester Marta Nowak told the Guardian. "That's why we must protest."