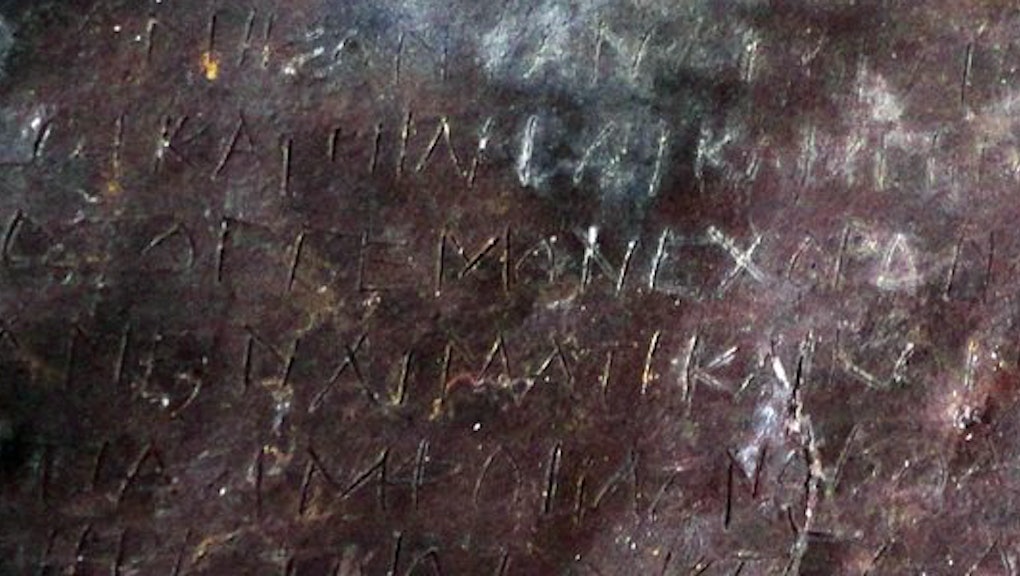 These Creepy AF Cursed Tablets Were Found in a 2,400 Year Old Grave in Greece

In a 2,400-year-old excavated grave of a young woman in Athens, Greece, five lead tablets that cursed four different tavern-owning couples were discovered, according to Live Science. While all five tablets had iron nails driven through them and were folded, only four were engraved with calls for the underworldly gods. The fifth was blank and most likely used for an oral curse.

"Cast your hate upon Phanagora and Demetrios and their tavern and their property and their possessions," one tablet said. "I will bind my enemy Demetrios, and Phanagora, in blood and in ashes, with all the dead ... I will bind you in such a bind, Demetrios, as strong as is possible, and I will smite down a kynotos on [your] tongue." (The word "kynotos" means dog's ear and is slang for a low throw on a dice roll. Taverns at the time were also places of gambling.)

The curses were possibly commissioned by a tavern owner who wanted to knock out the competition, Jessica Lamont, who is studying the tablets, said, according to Live Science.

Burying cursed tablets like these were the method of bestowing them upon unfortunate folk. "It's thought that these subterranean places provided a conduit through which the curses could have reached the underworld," Lamont said. The nailing "ritually echoed this wished-for sentiment."

In fact, the woman buried with the curses may not even be associated with them, having just provided an accessible way to the underworld.

The writing on the tablets are "explicit and lengthy and beautifully written," and may be done by a professional, which is rare, according to Lamont.