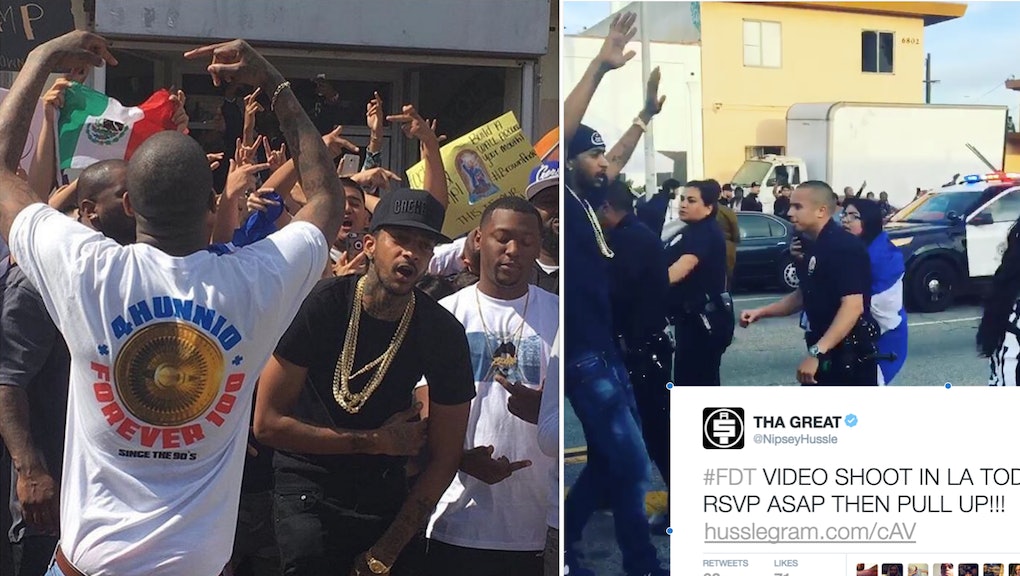 Since the song's premiere, YG and Nipsey Hussle have insisted their funk-laden viral hit "Fuck Donald Trump" is for the people. "I'm speakin' for some people that you prolly ain't know," Nipsey Hussle raps in the song's second verse. "It's pressure built up and it's prolly gon' blow."

It pretty much did Sunday at a video shoot for the song. YG put out a call on Instagram telling people to meet him at Melrose and Fairfax in Los Angeles. "Did this shit for the people!" he wrote on a post, sharing pictures of the crowd gathered. However, it didn't last long.

Before wrapping, the Los Angeles Police Department responded to calls of "gathered crowds and roaming cars," according to Pitchfork — one of which hit a bystander, who appeared to get up unscathed.

Police officers aggressively broke up the scene, and bystanders caught it all on video.

Law enforcement reportedly had no idea the gathering was a video shoot, a TMZ source said. Producer and artist Mosaicc described the scene in his Instagram post's caption.

"First they pulled out tasers, then pistols, then shotguns," he wrote. "Not sure any of that was necessary, but my nigga Nipsey Hussle executed like a professional. Hands up. We was all in a peaceful fuck Donald Trump mood. No rioting, no fighting, we were together. I guess expressing political views with togetherness requires police to pull out shotguns."

In a Billboard interview published Friday, YG mentioned he and Nipsey Hussle had previously gotten "blackballed by the police, shows [got] shut down, so we was always hesitant about going ham on shit."

It seems the words were a self-fulfilling prophecy. Yet judging by the tenor of that interview, it doesn't seem like YG and Nipsey Hussle have any intention of backing down. "This hip hop, this rap, we got a platform and we're going to use it for the right shit," YG said. "I ain't hesitating no more."