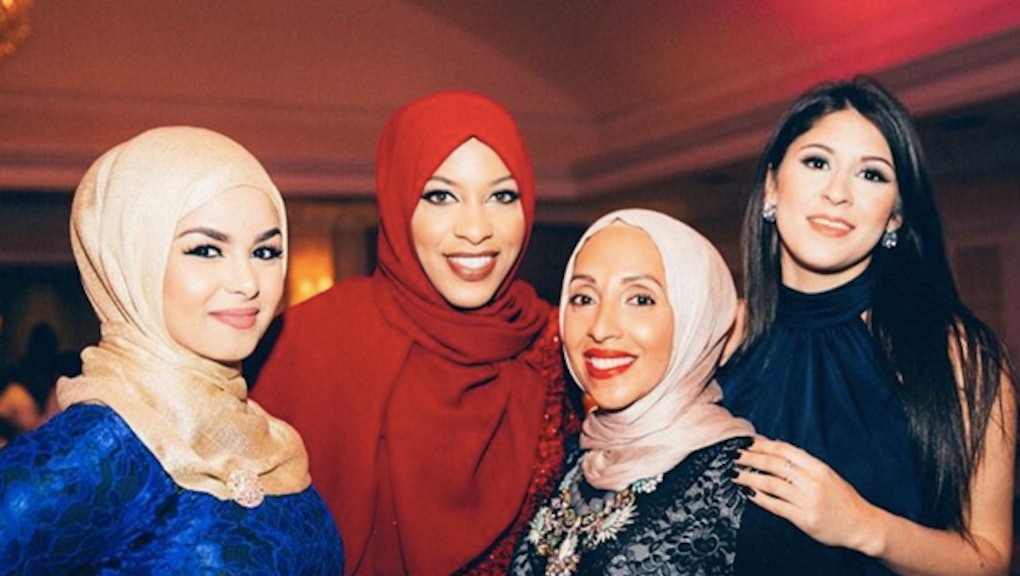 Oh, Pierre Bergé. I know you only meant the best with your recent salaciously edgy comments about fashion brands making clothing that covered Muslim women might purchase.

Read more: Marks and Spencer's Burkini Swimwear Is Celebrated... But Not By Everyone

Don't remember which statements you made? Let me remind you of a personal favorite quote: "I have always believed that a fashion designer is there to make women beautiful and grant them freedom, and not to side with this compulsory dictatorship, this abominable way of hiding women."

"I am scandalized," Bergé, the former business partner of couturier Yves Saint Laurent, said during an interview with French radio station Europe 1 on March 30. Of course he wasn't done:

"Creators should have nothing to do with Islamic fashion. Designers are there to make women more beautiful, to give them their freedom, not to collaborate with this dictatorship which imposes this abominable thing by which we hide women and make them live a hidden life. These creators who are taking part in the enslavement of women should ask themselves some questions."

Bergé missed a few major points in making his seemingly liberating note about fashion, and the ideals that go along with it.

While some Muslim women choose to wear hijabs or don modest clothing, it is not, as Bergé alluded, the norm for all. Rather than the oft-used rhetoric of this being a forced-upon lifestyle, many choose to do so out of body positivity and religious adherence.

Entrepreneur and designer Amirah Aulaqi refuses to have any of his rhetoric. "Fashion is a self expression of your identity and personality," Aulaqi said over email. "As a fashion designer, and as a Westerner who observes the headscarf, I don't need another male designer telling me how fashion should exclude a covered women, just because it doesn't fit his chauvinistic view of fashion and the hijab. This is no longer about convincing others of my religious obligation/liberation. It's just another man who's uncomfortable with women who control their own image."

Funny thing is, Pierre Bergé is no stranger to working with a brand that covered up its women to make a fashion statement. Hakeemah Cummings, a Muslim designer and stylist, discussed an infamous image from Bergé's former business partner, couturier Yves Saint Laurent, over email with the simple comment: "I'm wondering what the history of this photo is and if he shot himself in the foot."

During an email exchange with Mariana Aguilera, the founder and fashion editor at the Demureist, she brought up the double-standards Bergé's seemingly creatively-focused statement uncover: "Freedom is freedom until you overstep someone else's choices, that's what he's doing," Aguilera said. "It all feeds into this patriarchal mentality that women are not free until men deem them free. So is he really coming from a creative perspective?"

"For many women, the choice to dress the way they please is freedom," Sabiha Ansari of the American Muslim Consumer Consortium said over email. "I feel beautiful when I cover and love to shop for modest, stylish and beautiful clothing. Mr. Bergé seems to be living in a bubble, if that's his view."

Then there are the long-standing, hotly-contested anti-feminist ideals that the fashion industry has famously held itself to. Remember how hard people have had to battle to ensure that models can be hired without having to succumb to eating disorders in order to be "attractive" on the catwalk? Or the inherent design behind the heels so many people enjoy wearing.

Take it from Christian Louboutin himself, who told the Sunday Times that "putting your foot in a heel, you are putting yourself in a possibly orgasmic situation."

Let's not forget that while Bergé decided to focus on designers tapping into the lucrative global Muslim economy — valued at a whopping $327 billion — he appears to have forgotten some major issues the fashion industry has yet to attend to. "With the misogyny, racism and ableism in the fashion industry, I think it's very funny that he's going after designers for catering to a marginalized group," writer Nakia Jackson said in an email. "Meanwhile, he's apparently just fine with women of color being mostly excluded from runway and most print work, besides the requisite token. Boy, BYE."

Ultimately, Pierre Bergé's statements can succinctly be summed up by one Sara Alfageeh, a Muslim consumer: "He can kiss my ass. I have a much more articulate answer, but this sums it up nicely."