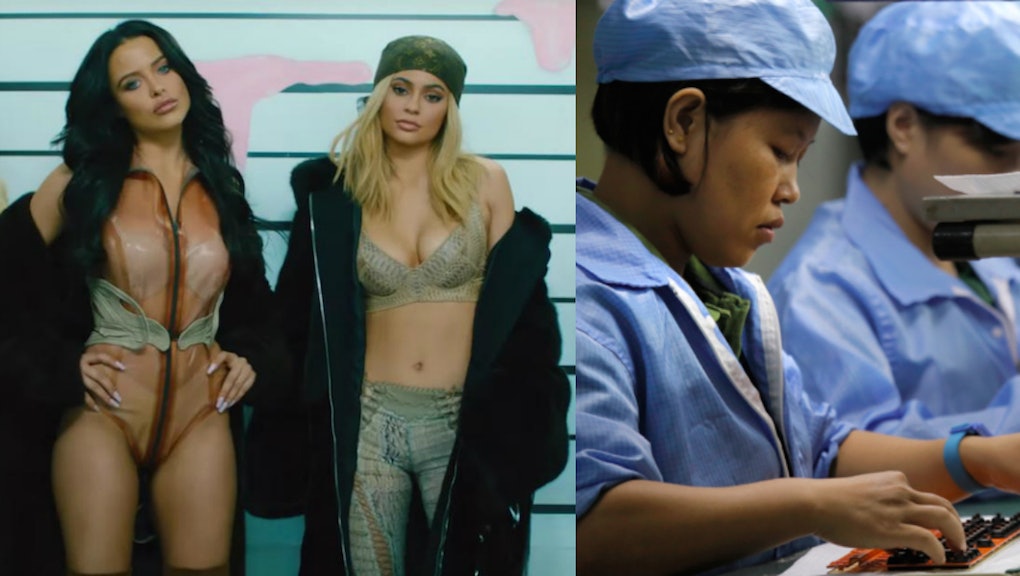 We're beginning to hear a lot more about the Kardashian and Jenner women facing issues with several of the companies they've placed their names on, from Kourtney, Kim and Khloé Kardashian's cosmetics to the most recent troubles arising from Kylie Jenner's Lip Kit.

After the internet was swept up in the Kylie Jenner Lip Challenge in 2015 and millions wondered how someone's lips could possibly evolve into the form Jenner's are today, the reality star decidedly capitalized on the public conversation with a new line of lip glosses.

Read more: Kardashians Face Lawsuit Over Beauty Makeup Line for, of All Things, not Tweeting Enough

Unfortunately, the workers at Spatz Laboratories, which produces the Kylie Lip Kit, are complaining of dirty, unsafe workplace environments similar to a "sweatshop."

A look at Spatz Laboratories' Indeed page, a site dedicated to review job experiences, reveals a perspective into the manufacturers of the Kylie Lip Kit. While these reviews are unverifiable, the comments that rate the company with four stars or perfect ratings have been down voted more than any other post. The ones which have been voted as most relevant are ones damning the company as a "terrible work experience that I wish I do not have again" and an "unclean work environment with little room to advance," as two reviews from 2014 stated.

One user, a former employee of Spatz, described the company in January as a sweatshop: "The pay is very minimal for the amount of work that is requested with no benefits and a long term of achieving until you are even reconsidered to be an actual part of the company."

"Expectations were unrealistically high for new hires, if you did not meet the standards you were fired. The work loads were intense so the most enjoyable part of working there was the breaks," wrote another user in 2014. Users who described Spatz as a "good place to work" described unsanitary, even dangerous, work environments: "Oily floors. Dangerous place to work. Smells of gases. Dirty atmosphere," read a comment from 2013.

A March review from a former employee who worked as a batch and fill technician for the company described the most difficult part of working for Spatz as "a lack of equipment to get the job done, especially when there were a lot of requests to get done."

"The turn over rate was high," another former production worker employee for Spatz wrote in late February. "I love that I could see how makeup was made from start to finished but the down fall is that the makeup particles made me cough and sick."

Spatz Laboratory has since responded to the viral backlash it's facing since the news went out. "Spatz Laboratories completed and passed its most recent comprehensive third party social accountability and responsibility audit on March 3, 2015," a representative wrote in a released statement. "This audit certified that Spatz Laboratories is in compliance with the highest standards and requirements as it relates to: labor practices, health and safety, discrimination, discipline, harassment, compensation and hours of work. The ownership and management of this company takes the health, well being and success of our employees very seriously and [is] always committed to upholding the highest standards."

Meanwhile, those who have tried the Lip Kit have mixed reviews. While some complain of the lipstick's intense and permeating smell, others said "I think my lips are going to flake off after this," Cosmopolitan reported. "It was way too drying," another woman told the publication. "So in the quest for 'Kylie lips,' I added the liquid lipstick, thinking that would be more moisturizing, but that wasn't the case. After about half an hour, it started flaking onto my Starbucks cup."

Regardless, Jenner's Lip Kit remains sold out at nearly all times on her site. However, the elusive reality star seems to have added three new colors to the virtual shelves after releasing a confusing promotional mini film last week.