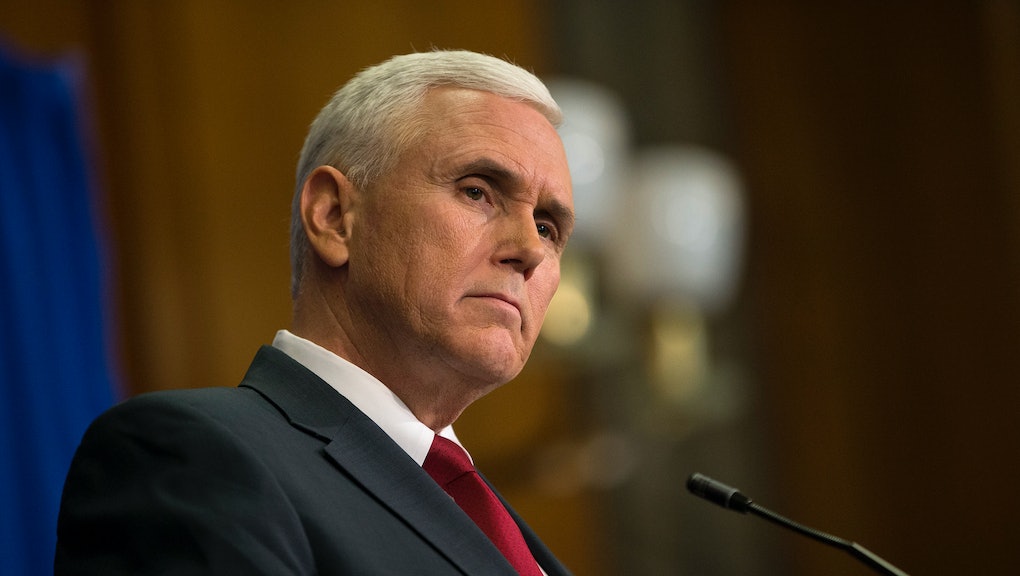 Indiana Gov. Mike Pence made his bed — even if he doesn't enjoy lying in it, he should learn a few things in the process. His female constituency, at least, is doing its part to make that happen. On March 24, Pence signed into law an abortion bill, HB 1337, that maybe takes the cake for restrictive, signaling to the vagina-havers of Indiana that he really cares about their vaginal well-being. At the prompting of Facebook group Periods for Pence, they're calling his office to tell him about their downstairs situations. So that he can govern accordingly.

Read more: These Period Panties Allow You to Bleed All Over Your Least Favorite Politician's Face

"Fertilized eggs can be expelled during a woman's period without a woman even knowing that she might have had a potential blastocyst in her," an early post on the page reads. "Therefore, any period could potentially be a miscarriage without knowledge. I would certainly hate for any of my fellow Hoosier women to be at risk of penalty if they do not 'properly dispose' of this or report it."

The measure, for reference, stipulates "that a miscarried or aborted fetus must be interred or cremated," and prohibits abortion on the basis of the fetus's "race, color, national origin, ancestry or sex," or a Downs syndrome diagnosis. The bill obligates people to obtain an ultrasound 18 hours before the pregnancy is terminated, which isn't inconvenient in the slightest and is totally just for their own good.

"Just to cover our bases, perhaps we should make sure to contact Governor Pence's office to report our periods," the Pence for Periods post continues. "We wouldn't want him thinking that THOUSANDS OF HOOSIER WOMEN A DAY are trying to hide anything, would we? ... You should really let him know, since he's so concerned. It will only take a few minutes of your day, but it lets them face an undue and unjust burden, for a change!"

And oh, how the people of the Hoosier State complied.

Leigh, coming in hot with the very important questions.

Given the efficacy of their Pence trolling, Periods for Pence expanded its scope to include Rep. Casey Cox, the man who gave Indiana this legislative gift in the first place.

And of course, the internet obliged.

According to the Cut, the group exists as a platform for women to weigh in on a bill that will directly concern them but about which they were never consulted. Understandably, they have a lot of thoughts on the subject of uteruses, vaginas and periods, with which so many of them coexist each day. We so hope they'll continue to share.