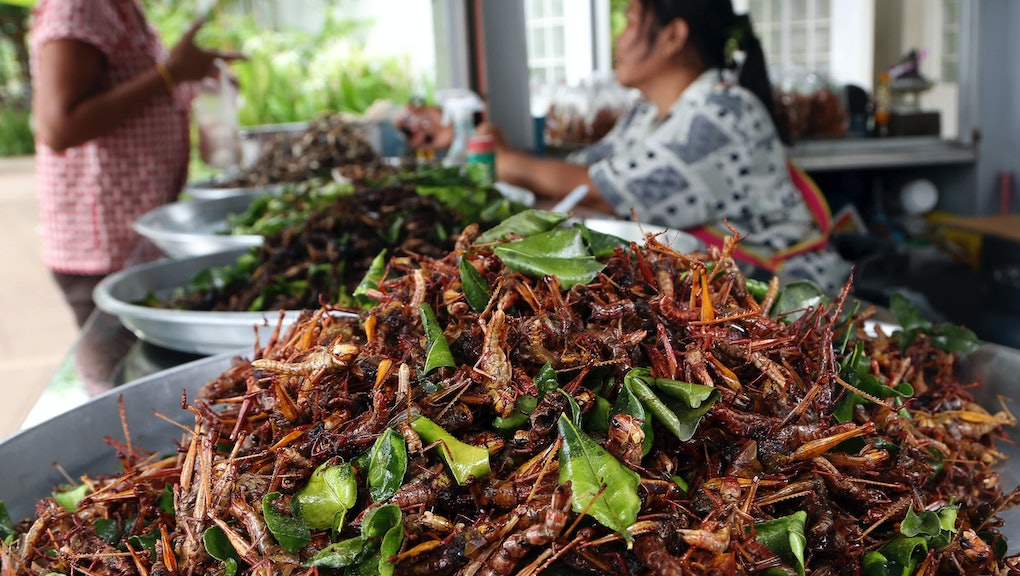 Does the idea of eating bugs gross you out? Well get over it, because there are actually plenty of edible insects out there for you to try, including ants, worms and grasshoppers. Here are just a few of the many delicious insects you can fry, bake, freeze or dip in chocolate — If you're feeling adventurous, that is.

Read: Dudes, a Vegan Diet Could Lower Your Risk of Prostate Cancer by 35%

In Mexico, "maguey worms," which are technically caterpillars, are "fried and sold with butter and garlic for as much as $40 a dozen at some upscale Mexican restaurants," according to the Associated Press.

Crunchy, fried crickets and grasshoppers are common street food in some parts of the world. Mexican spicy fried grasshoppers, also called chapulines, can be eaten in tacos, on tostadas or snacked on plain. In Bangkok, stir-fried grasshoppers seasoned with spices are sold on carts. Apparently they're just like popcorn.

Lots of different types of ants (and ant eggs) are edible, but in northern Colombia you can eat "big-butt" ants, or hormigas culonas, according to Global Post, which are plucked off the ground and then "roasted, salted and eaten like peanuts."

Mealworms, or beetle larvae, can be fried and eaten on their own like a snack or worked into another dish, like this recipe for mealworm french fries. Research shows that eating mealworms may also be good for the planet. According to Smithsonian magazine, "a pound of mealworm protein, in particular, had a greenhouse gas footprint 1% as large as a pound of beef."

They may sound like a Biblical plague, but to some, locusts are a treat. Locusts are actually the only insect that qualifies as Kosher, reported the BBC, and in some parts of the Middle East they are served deep-fried, pan-fried and covered in chocolate.