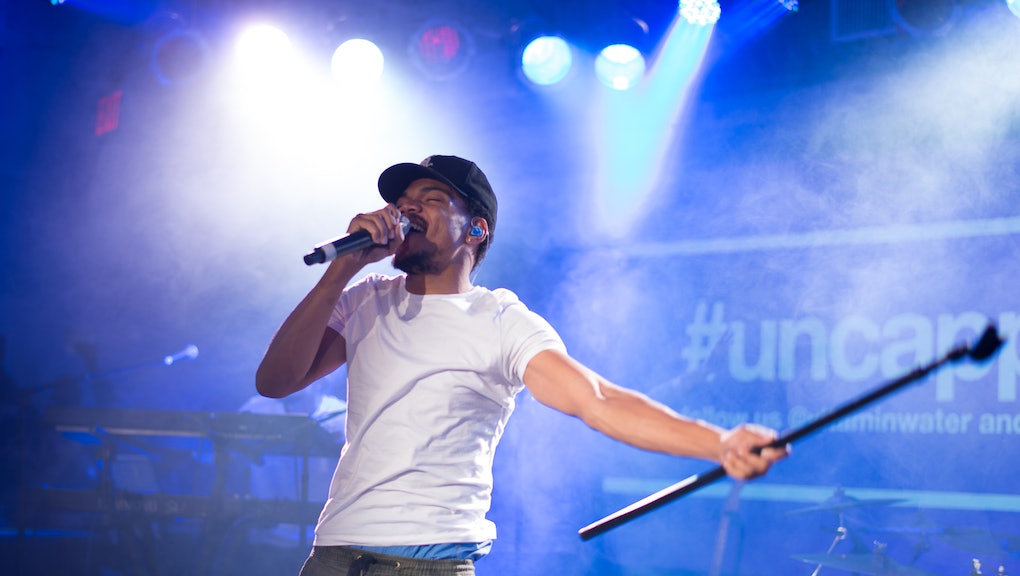 Chance the Rapper is readying a new project set for release in April. The rapper made the surprise announcement during a performance at SoundCloud's streaming service launch party in New York City last week that he's dropping a mixtape this month, according to Esquire's Matt Miller.

Of course, we've known for some time Chance has been prepping new hits after lighting the Late Show With Stephen Colbert stage on fire with his unreleased song "Angels" in October, as well as when he performed another new untitled track in the same month.

Chance has kept up a pretty hectic schedule of project releases for an artist who isn't signed to a label. After releasing Surf, an album with his band Social Experiment, he collaborated with Lil B on the joint mixtape Free (Based Styles Mixtape) and even found time to appear on a number of eclectic artists' recent hits, including Kanye West, Hundred Waters, Chainsmokers, Skrillex and BJ the Chicago Kid, among others.

A member of the audience uploaded Chance's rendition of "Ultralight Beams," featured on Kanye West's The Life of Pablo, to YouTube.

"I'm working on a lot of music and a lot of individual projects right now, but my focus is eventually getting out of this trilogy of music that would be #10Day and Acid Rap and third mixtape," Chance told Hot97's Ebro Darden and Laura Stylez in October last year. "And eventually to get to a place where, you know, like I said: stand on top of something and look around and be like, 'This is what I do.' I'm not just rapping to rap. This is what I do ... It's a project just like any other project, but this one is defining."

Check out Chance's interview with Hot97 below: