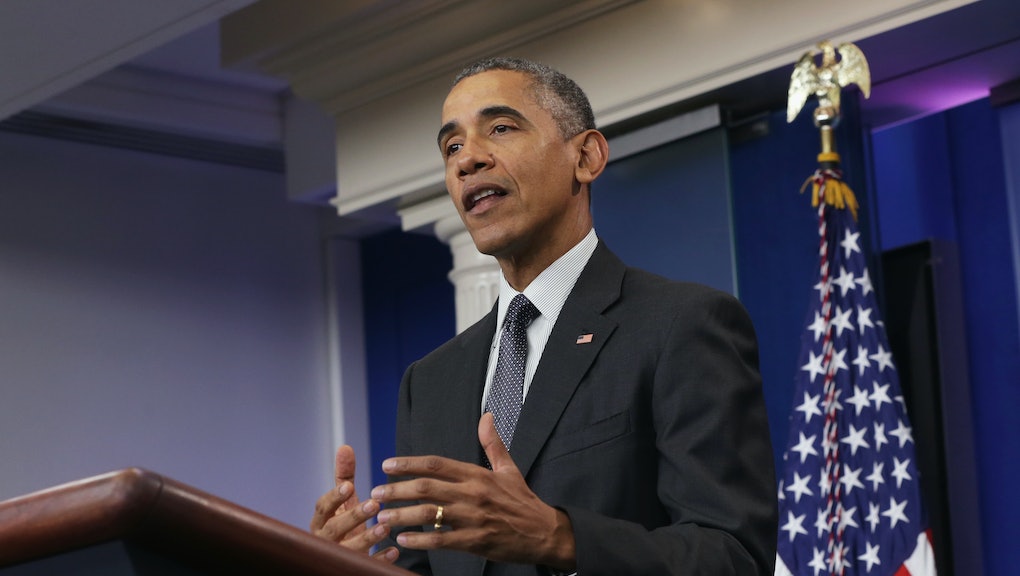 "Oh no," he said to laughter after a reporter mentioned Trump's name in her question.

"We've got serious problems here. We've got big issues around the world. People expect the president of the United States to treat these problems seriously," he said from the White House briefing room.

Obama said that cutting off remittances would do great damage to the Mexican economy — thereby sending more migrants to the U.S. in search of work.

Trump's proposal, he charged, was "not thought through" and was "primarily put forward for political consumption." Foreign leaders have privately expressed alarm at ideas Trump has espoused on the campaign trail, Obama intimated.

A diversion from inversions: The remarks came following a statement on the U.S. economy and new tax rules put forward by the Treasury Department.

One day after a massive leak of financial documents exposed the lengths to which global elites have gone to evade taxes, Obama trumpeted his administration's crackdown on corporate tax-dodging, a bugaboo of populist politicians on both the left and the right.

Obama embraced new Treasury Department regulations that aim to curtail so-called corporate inversions, whereby companies move abroad to skirt United States taxes. Calling inversions "one of the most insidious tax loopholes out there," the president framed the issue as a matter of basic fairness.

"A lot of these loopholes come at the expense of middle class families because that lost revenue has to be made up somewhere," Obama said.

Democratic frontrunner Hillary Clinton has declared that inversions would be more appropriately described as "perversions," and has joined progressive populist challenger Bernie Sanders in advocating executive and congressional actions that curb incentives for companies to move overseas. Republican presidential frontrunner Donald Trump has called for slashing the corporate tax rate to 15%.

New relevance: Support for robust action to crack down on tax-avoidance is likely to be further stoked by the leak on Monday of the Panama Papers — the 11.5 million documents from the Panamanian law firm Mossack Fonseca, which is linked to an estimated 215,000 shell companies and more than 14,000 clients who retained the firm to hide their wealth from global tax authorities.

The scandal has forced the resignation of Iceland's prime minister.

Obama referred to the leak in his remarks on Tuesday, calling it a reminder that "tax avoidance is a big global problem."

"It's not unique to other countries because frankly, there are folks here in America who are taking advantage of the same stuff," he said.